The saying goes, “Don’t judge a book by its cover,” but what about a magazine?

Here is my investigation of WIRED Magazine’s organization in its publication design. I am using the January 2017, August 2017 and November 2017 U.S. editions of WIRED, courtesy of Professor Strong, as case studies.

What is the function and purpose of WIRED’s cover?
The purpose of WIRED’s covers is to inform and entice. Across these three issues (although the ones from late 2017 are more similar), I noticed that WIRED beckons its readers with the promise of the unknown. Tales from an uncertain future! Love in the time of robots! An artificial extension of life! 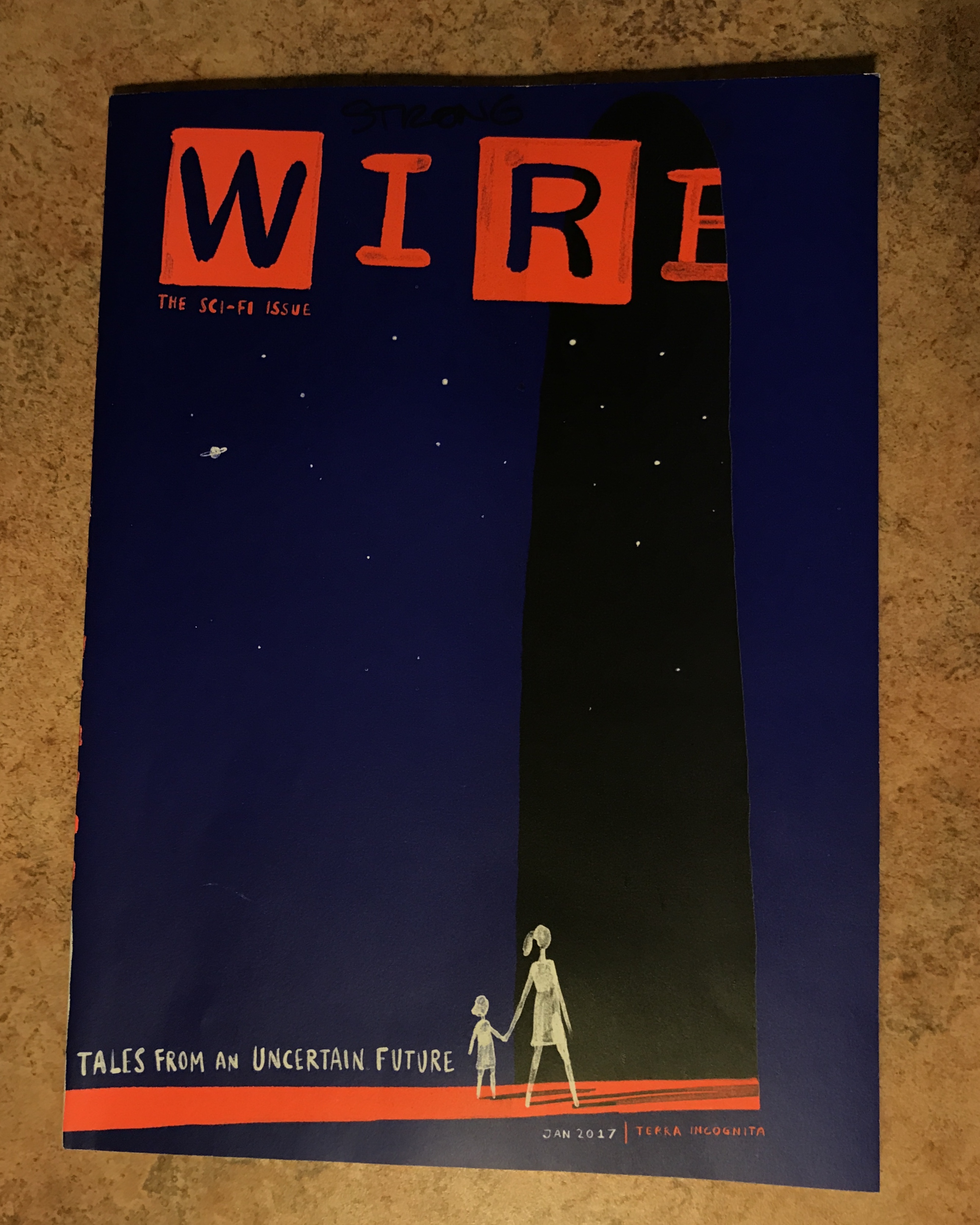 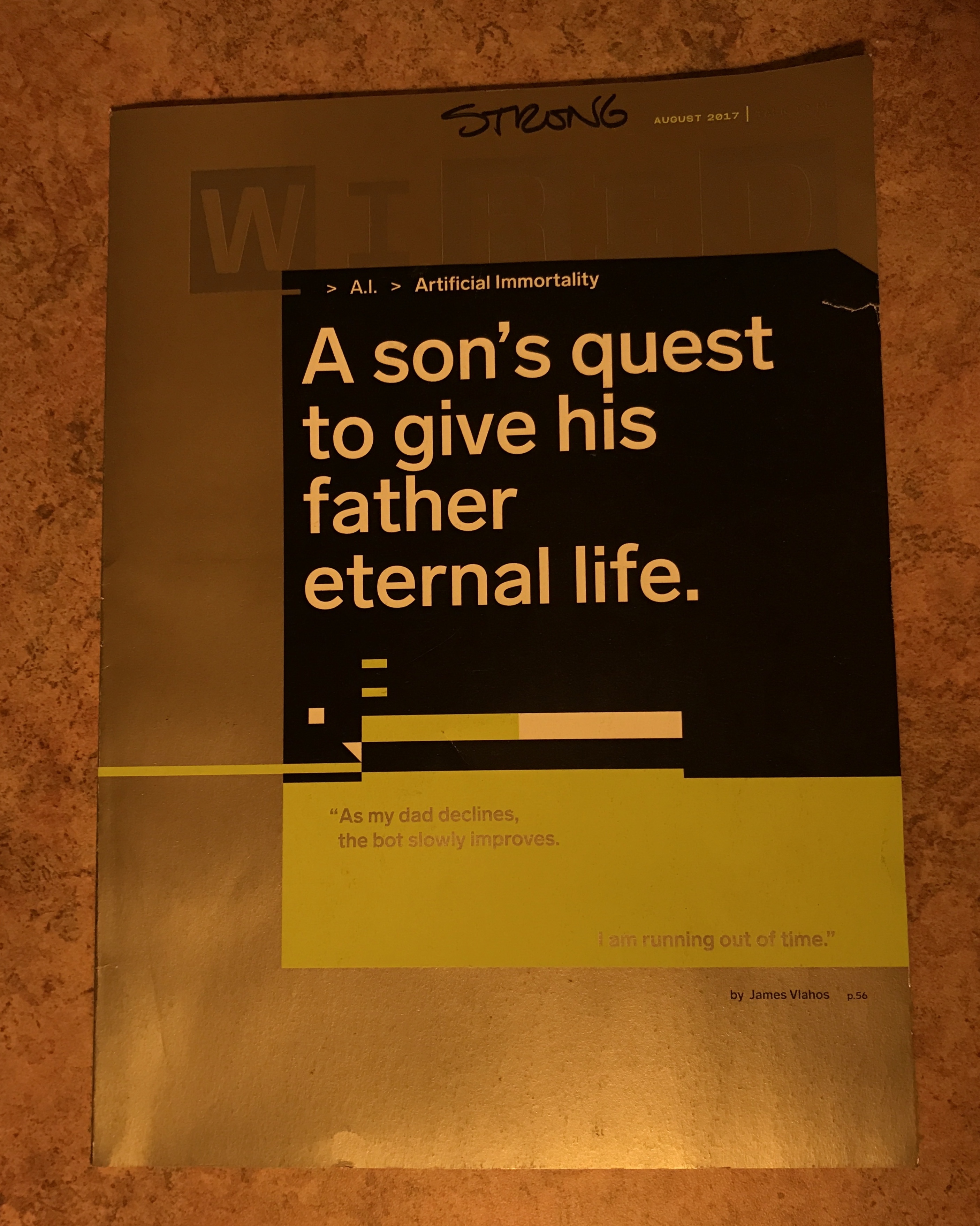 Note: The tagline across from the month and year says, “Talk to me.” 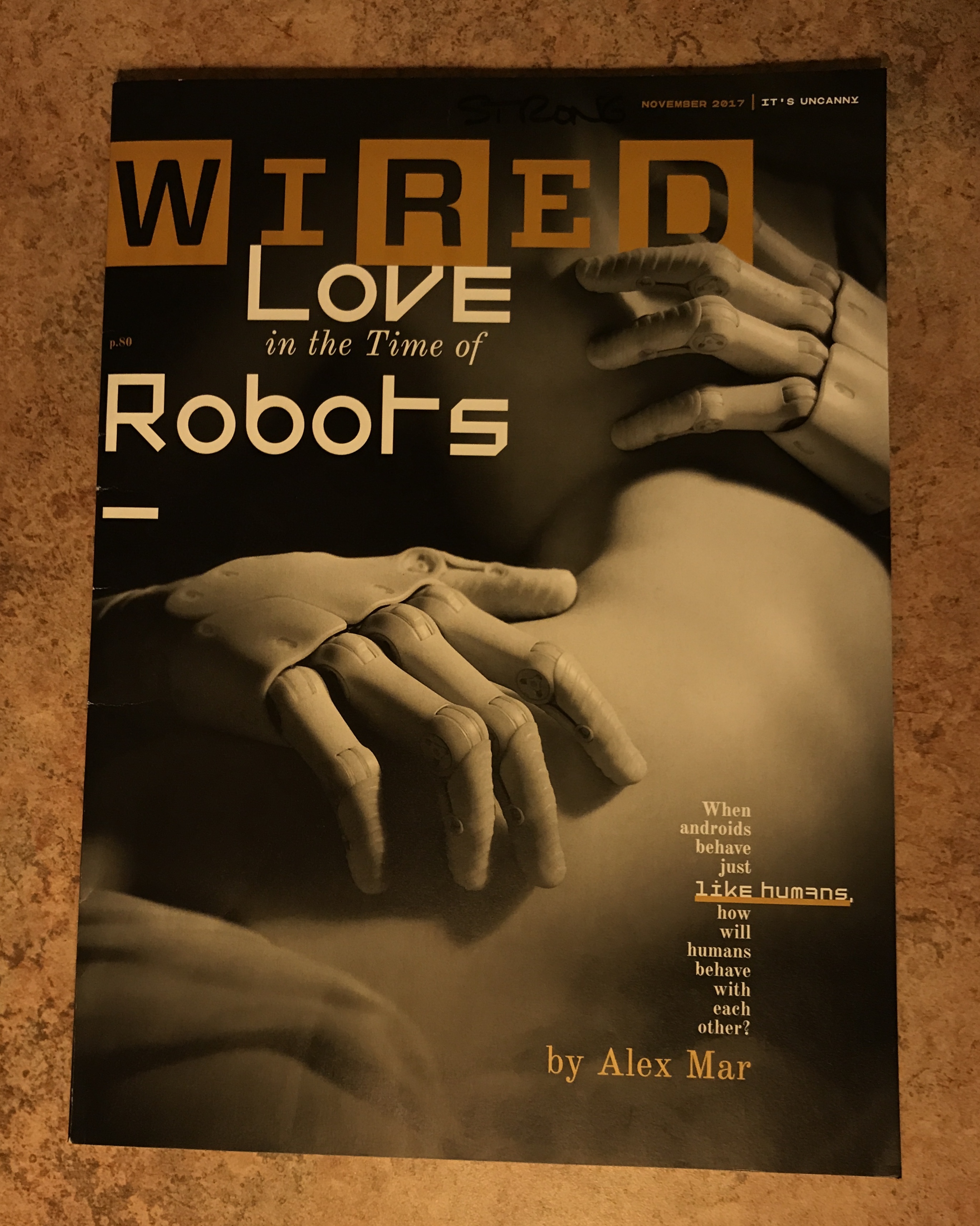 Notably, WIRED went with an illustration for the January 2017 cover whereas one is a photograph with text and the other is simply text.

I think illustration was a suitable choice for the January 2017 issue because it was WIRED’s “the Sci-Fi Issue.” Unlike other copies of the magazine, which are normally news-focused, this version focused on literature. 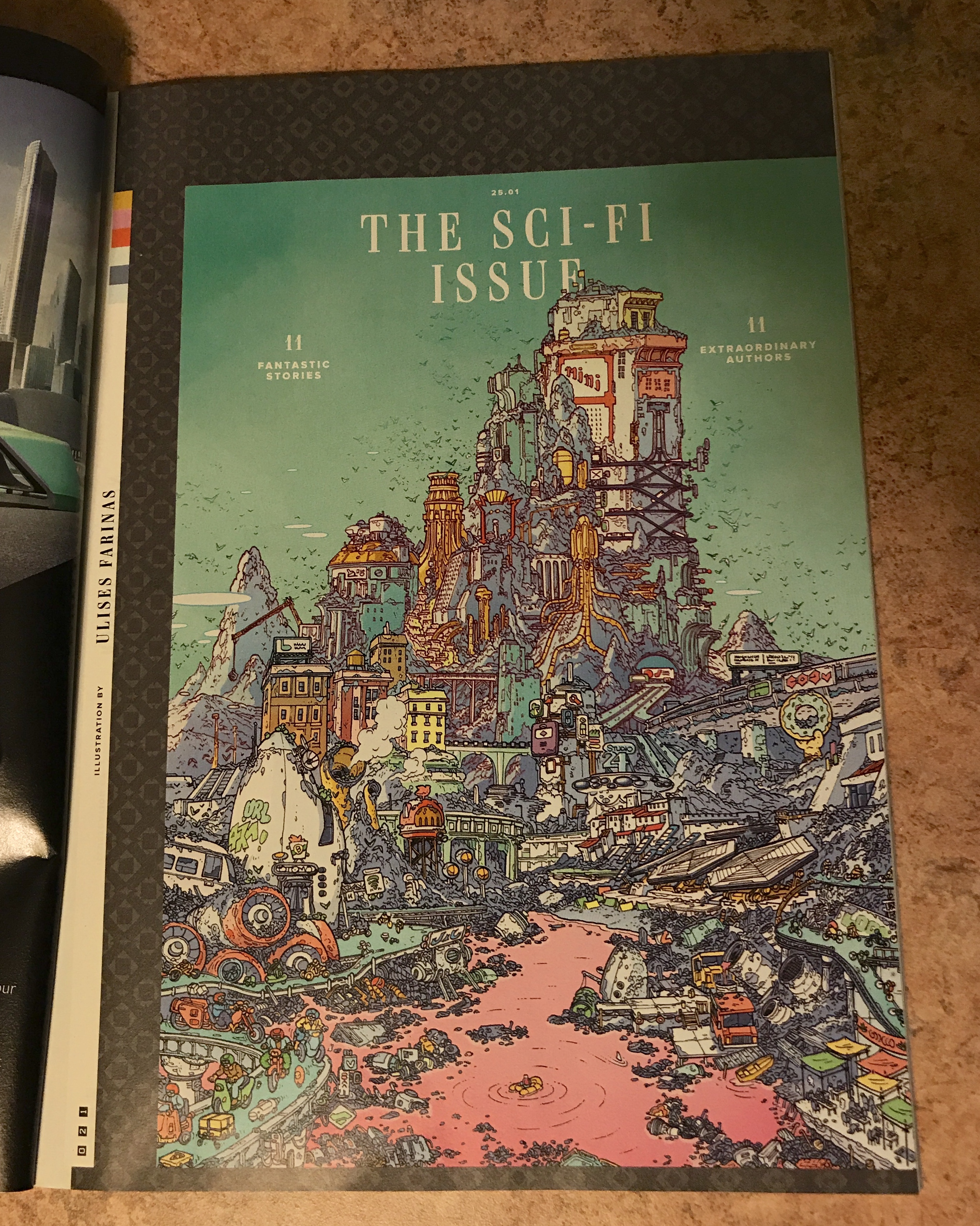 The cover invites WIRED’s audience to use their imagination and think more playfully. It tells readers they are about to dive into a fabricated, beautifully constructed world — an endeavor requiring great imagination and a more whimsical creativity than they use in their daily lives.

Whether it’s alternate realities, epics in galaxies far, far away or robot companions imminently in our backyards, WIRED tickles their audience’s curiosity with its covers. This is a smart move, given that science is an industry fueled by curiosity and the desire to know what is deemed un-knowable.

What types of images are used in WIRED? What role do they play?
WIRED is very much a photography-driven magazine. Tendencies I picked up on across these three issues are:

Together, these three manifestations of photography lend WIRED an immediacy. 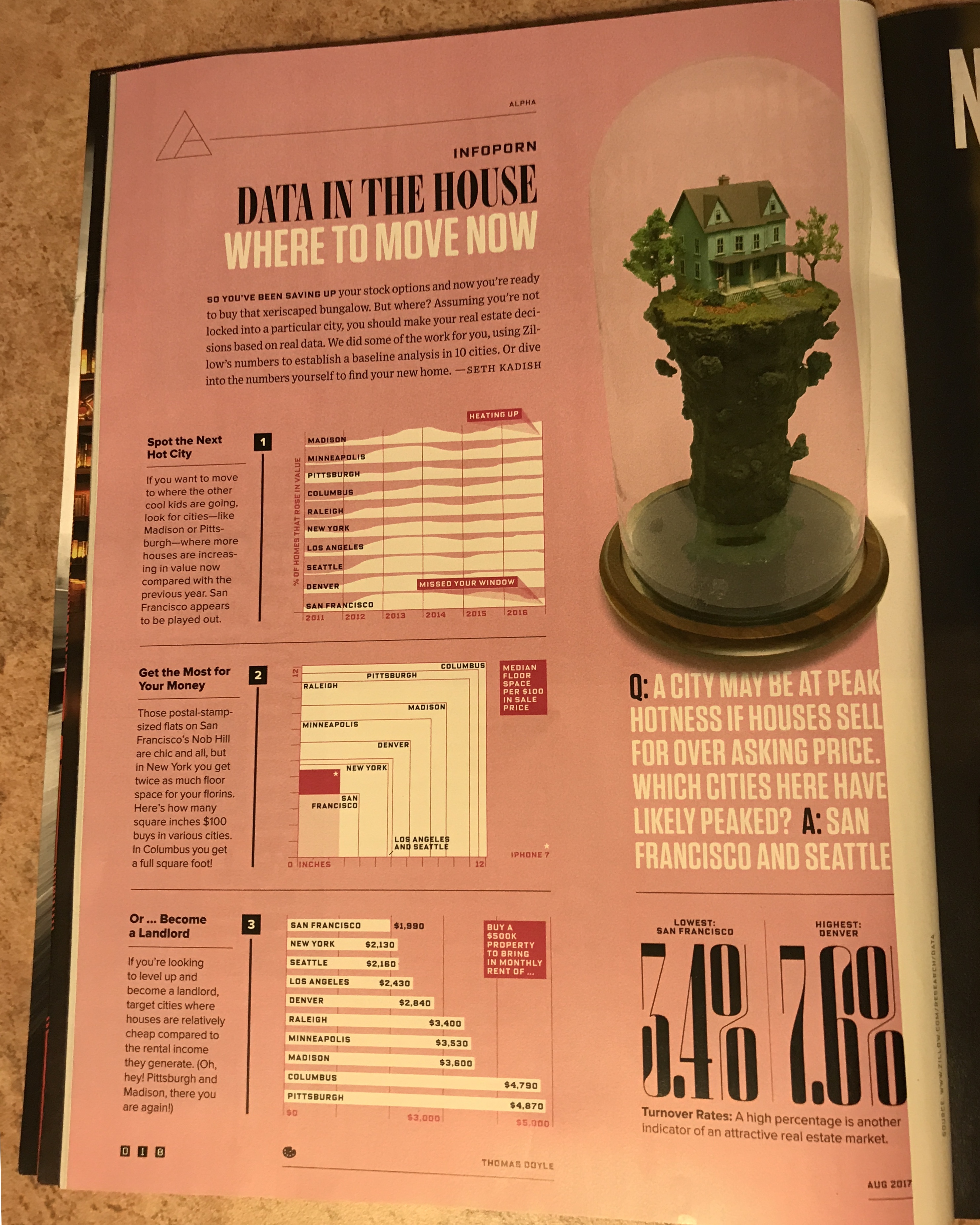 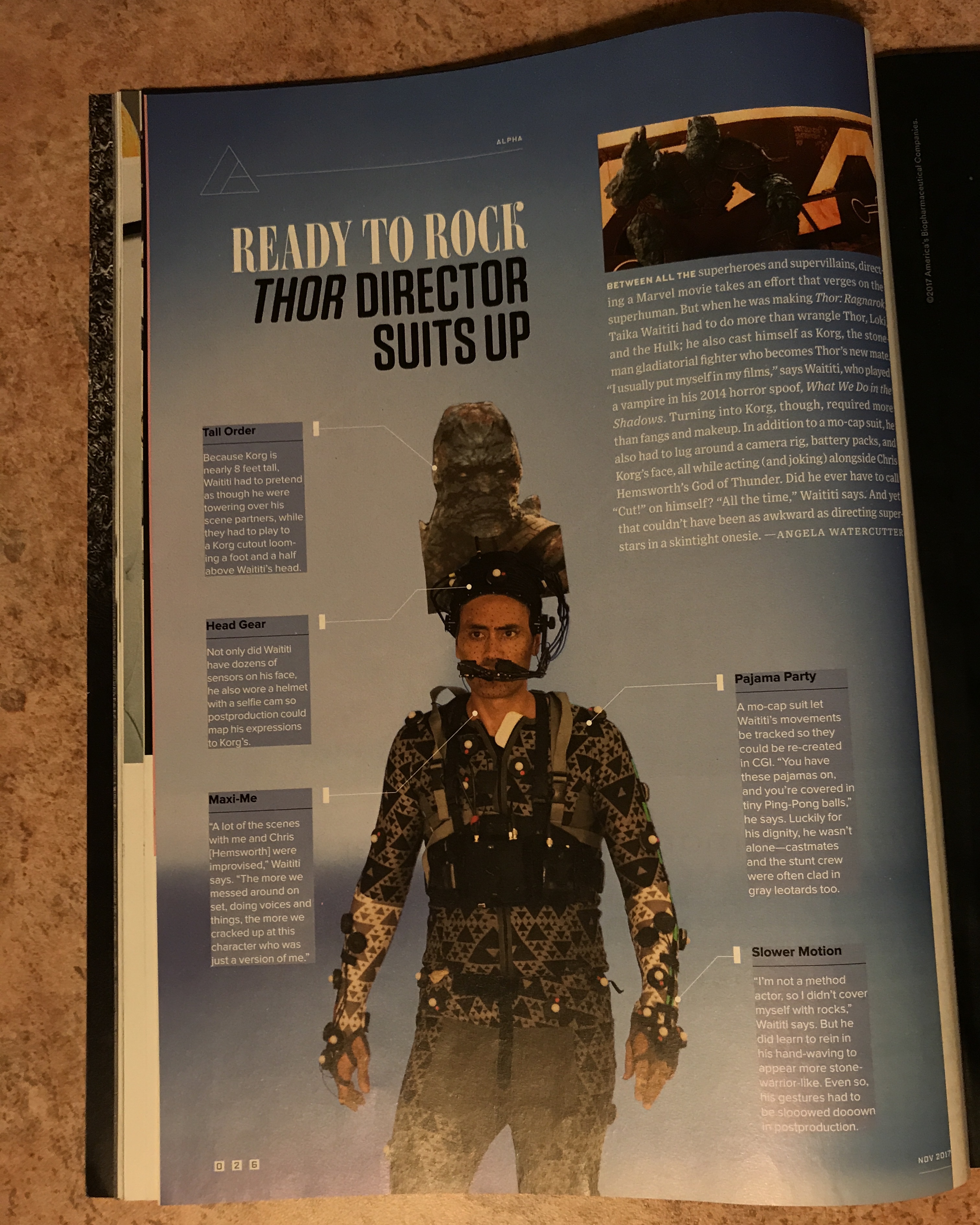 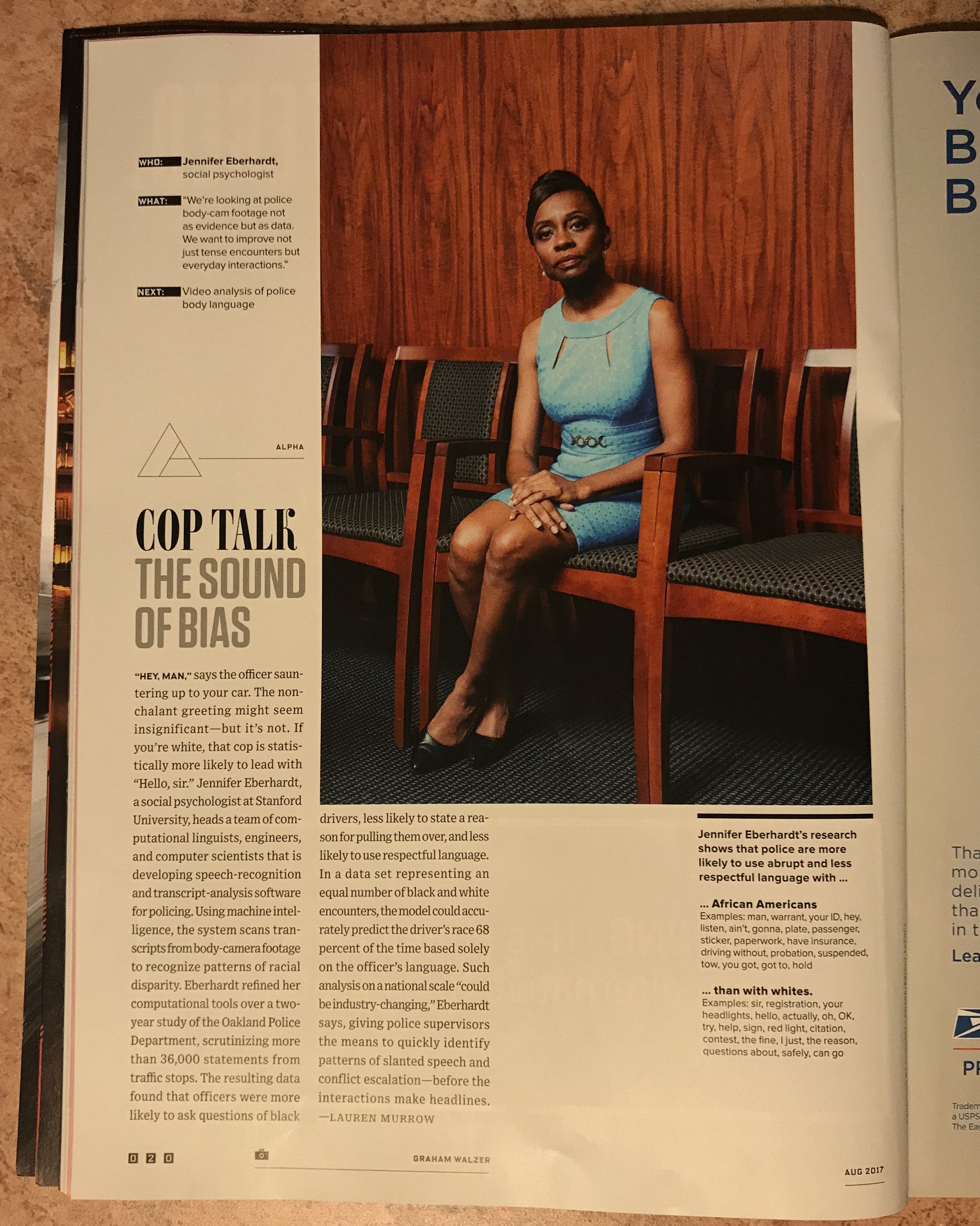 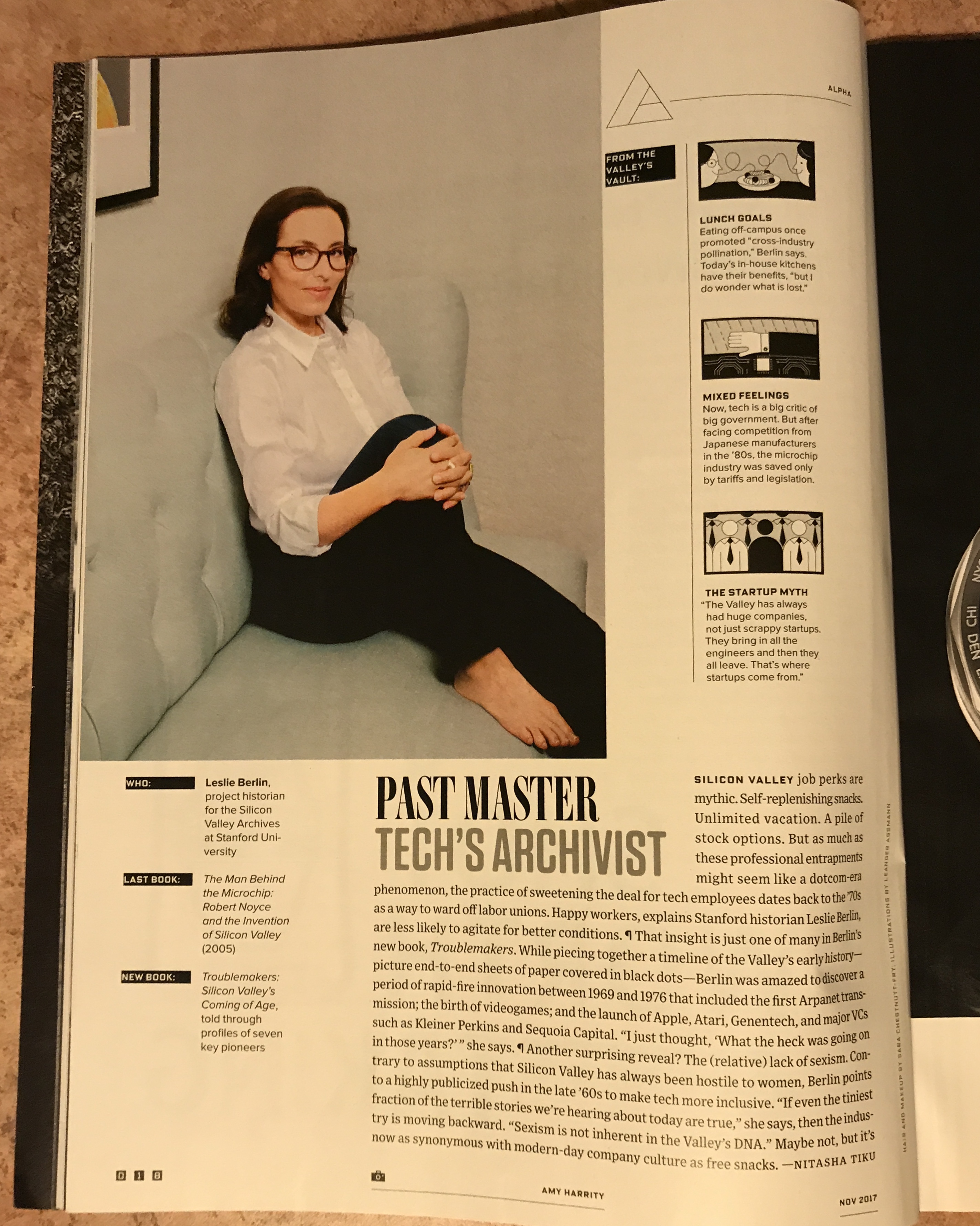 Cut-outs make the people and objects in question feel like they are floating off the page. Relaxed images of STEM’s movers and shakers make you feel as if you are sitting across from them, listening to them speak their piece. 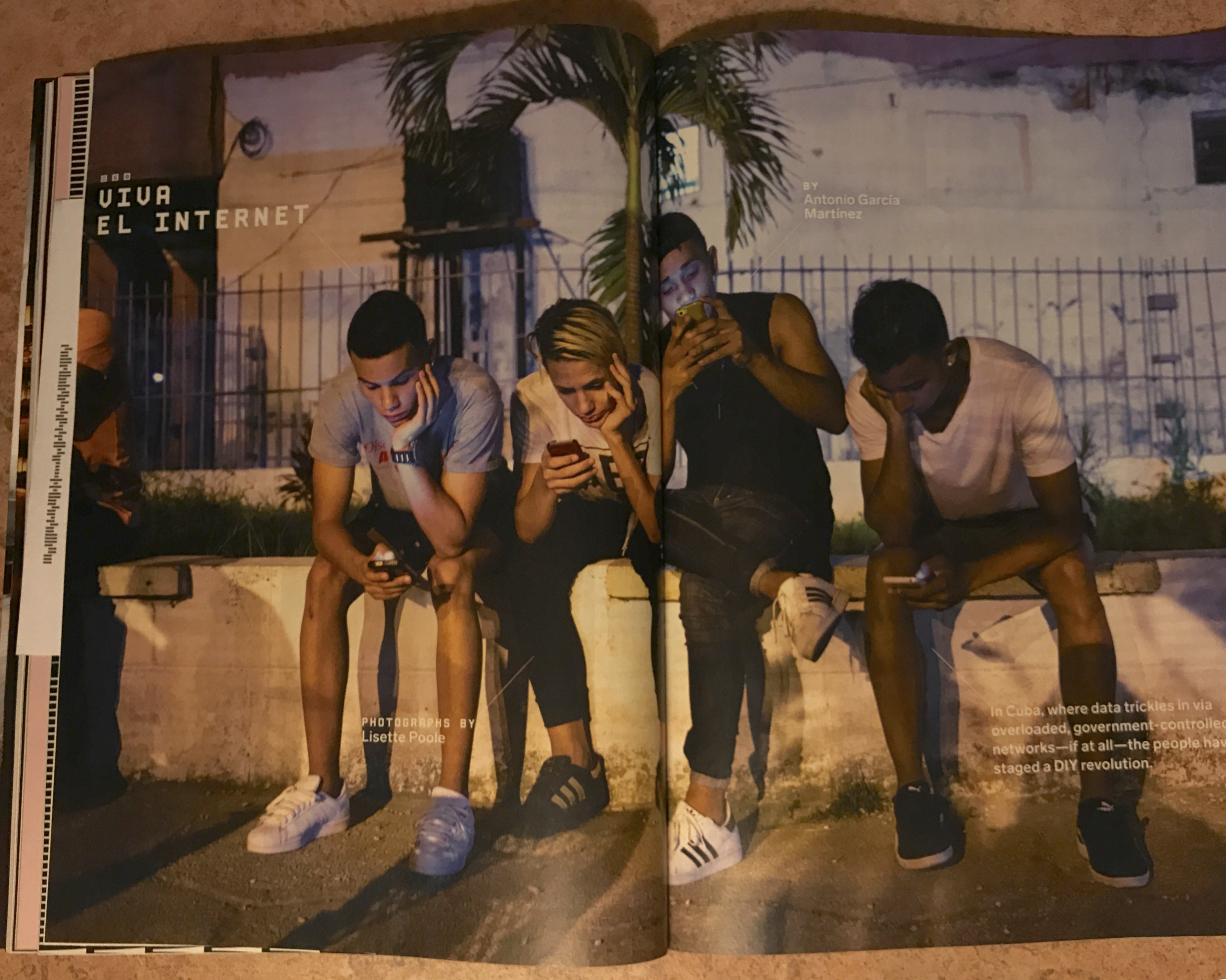 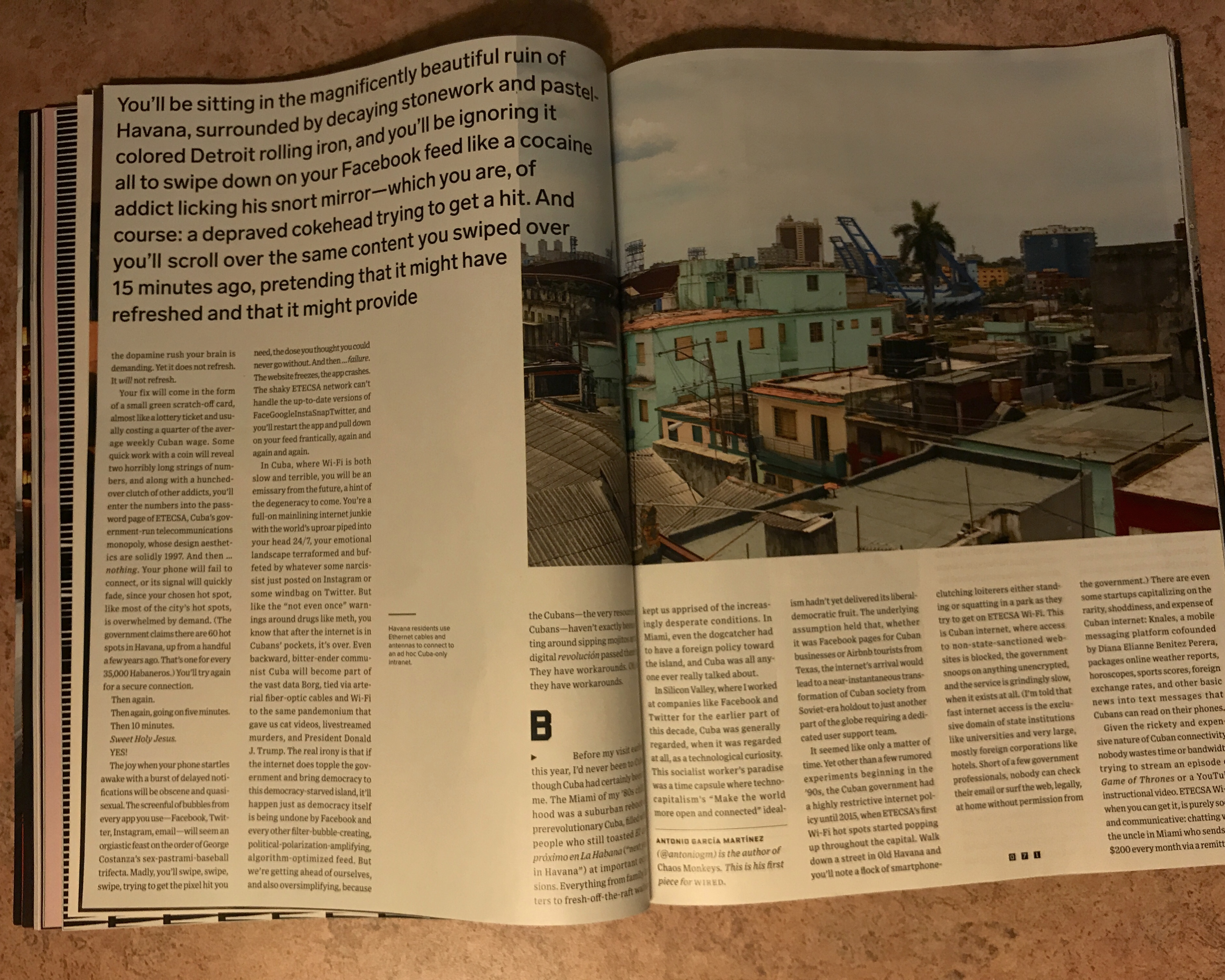 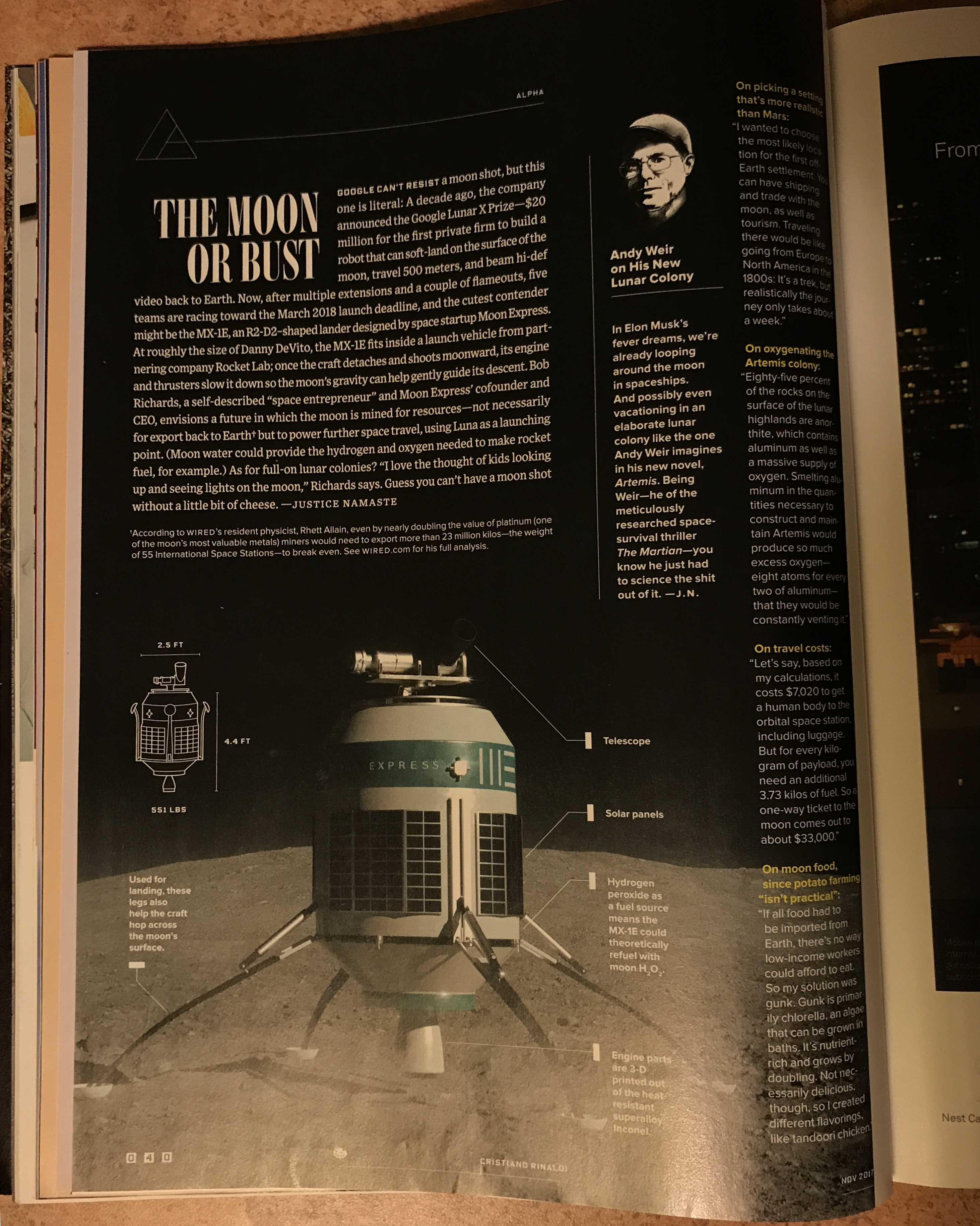 The landscapes interacting with heds and body texts appear seamlessly. If the text was always so separate from the images of far-away studios and street corners, you would never have that front-row feeling WIRED’s visuals give their stories. And it’s thrilling — especially since these technological experiences can be very specific, very obscure and very illusive.

Through WIRED’s images, you get a sneak-peek into a little sliver of the world you could not have fathomed to exist.

Again, the January 2017 issue is an outlier. 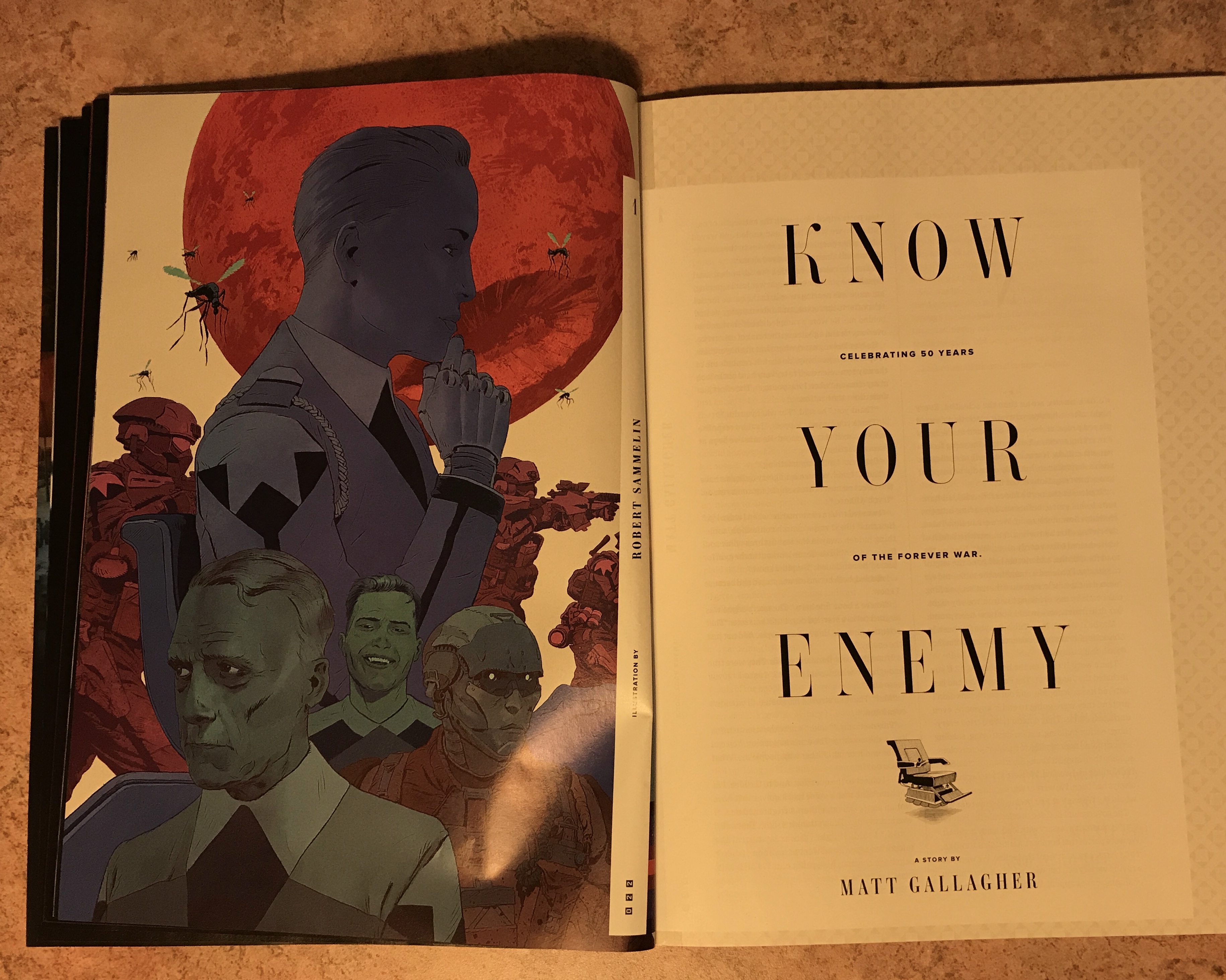 January 2017: Illustrations in WIRED, Exhibit A 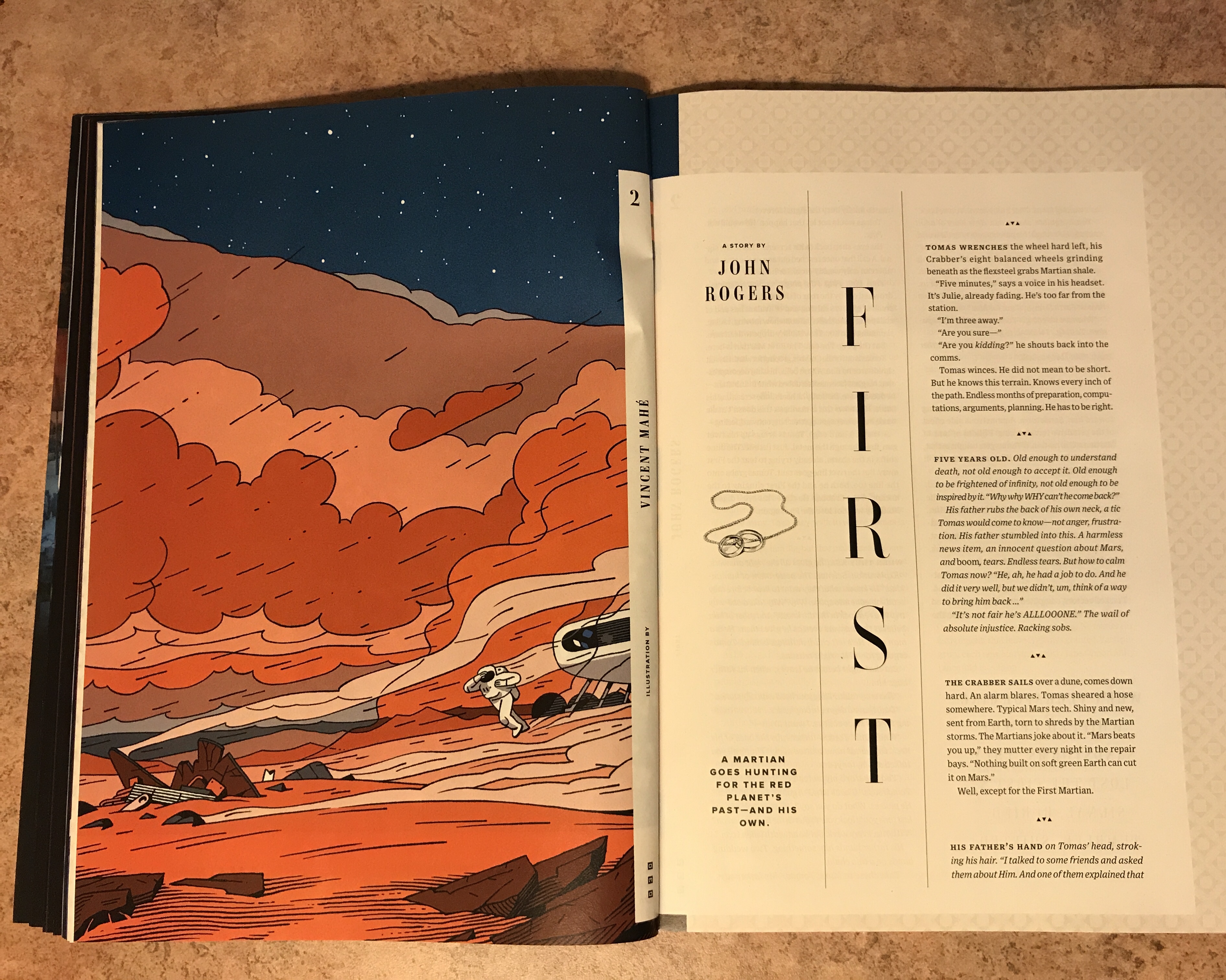 January 2017: Illustrations in WIRED, Exhibit B

Its heavy use of illustrations — replacing all photos that are not advertisements with sketched images — gives the magazine a more storybook feeling. 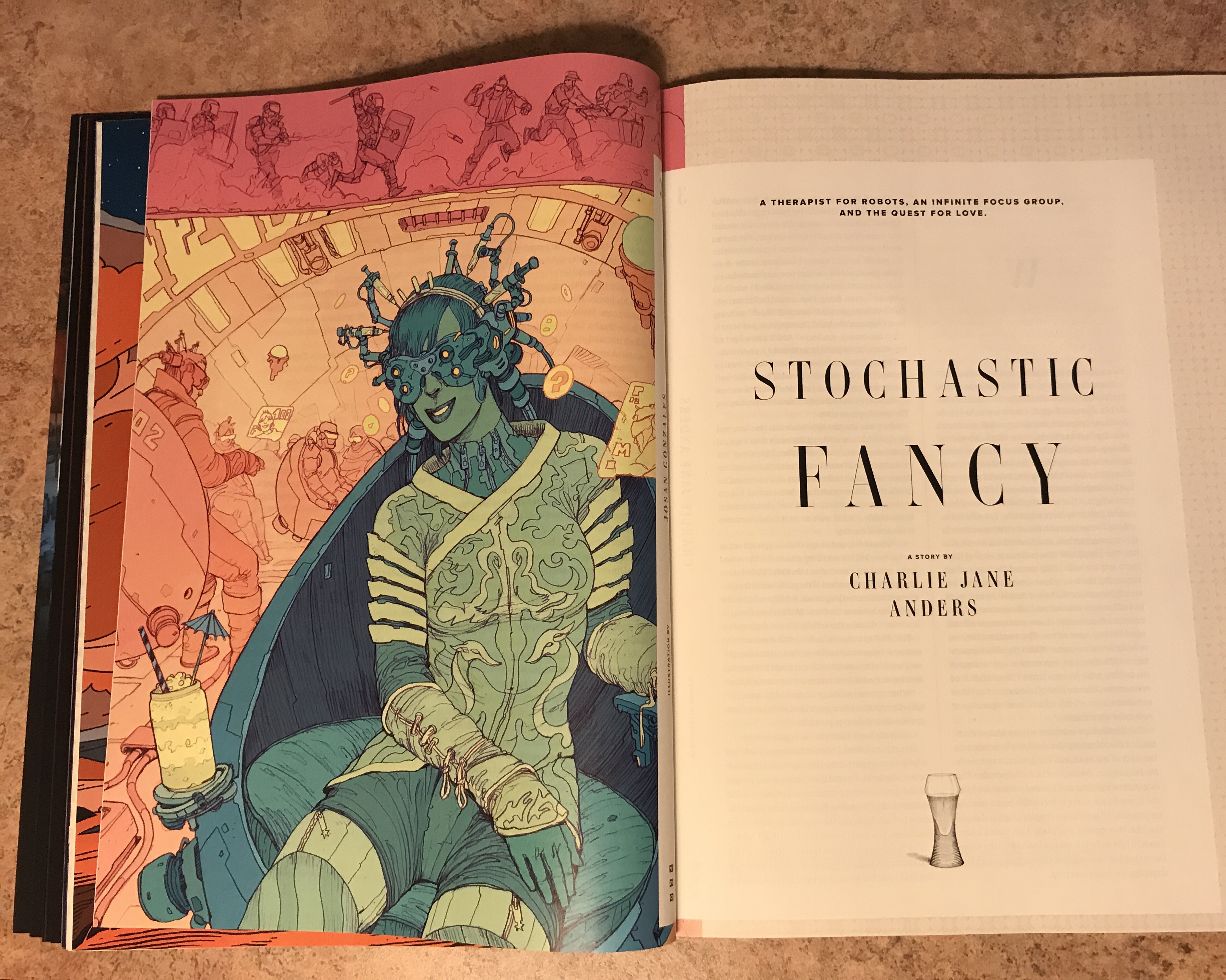 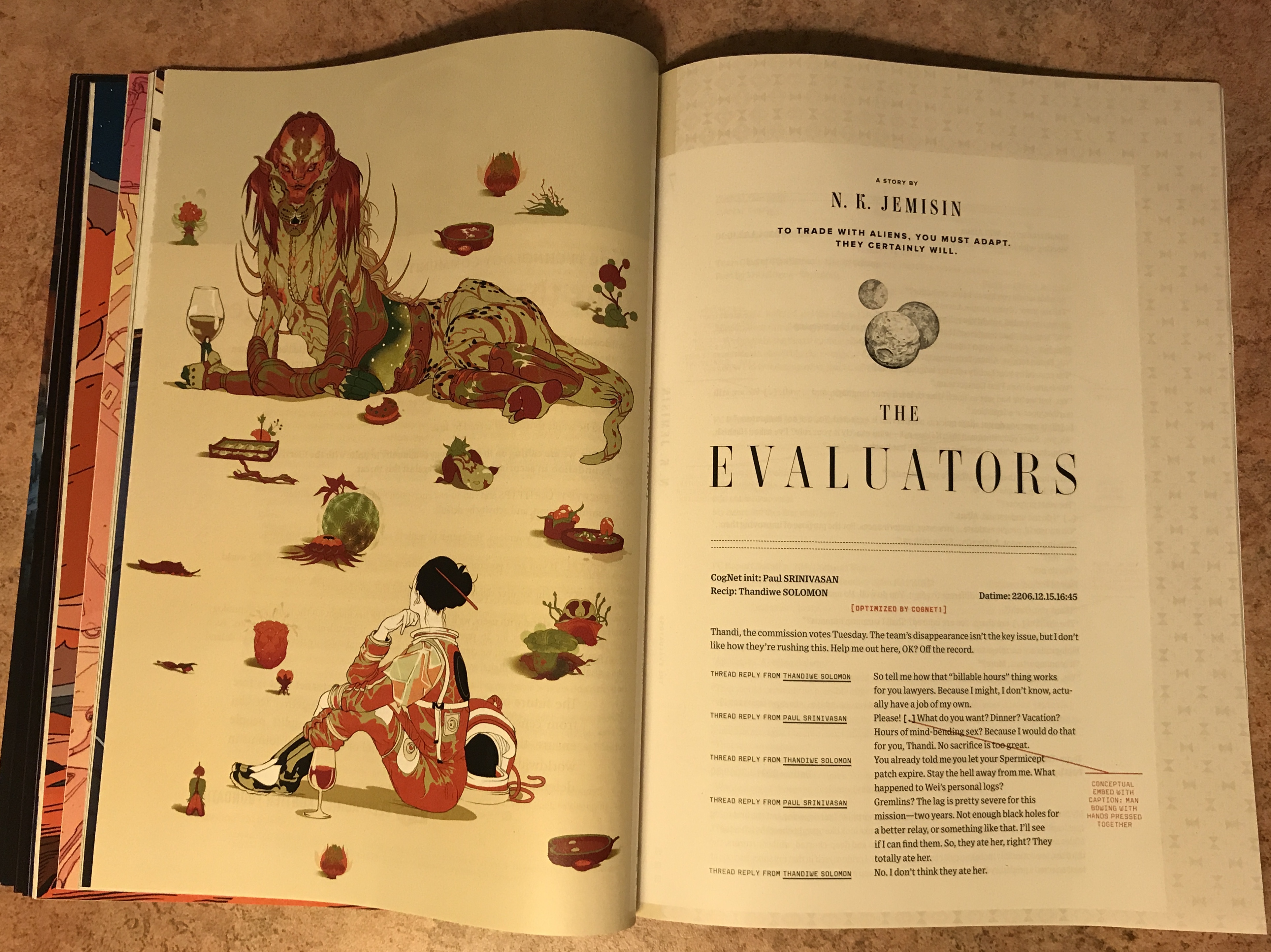 Since these tales are science fiction ones, illustrators are given free reign to convey just how outlandish and fantastical the content is through drawings.

What are the particulars of WIRED’s folio? WIRED’s nameplate?
WIRED’s folio consists of little numbers in its signature, funky typeface. 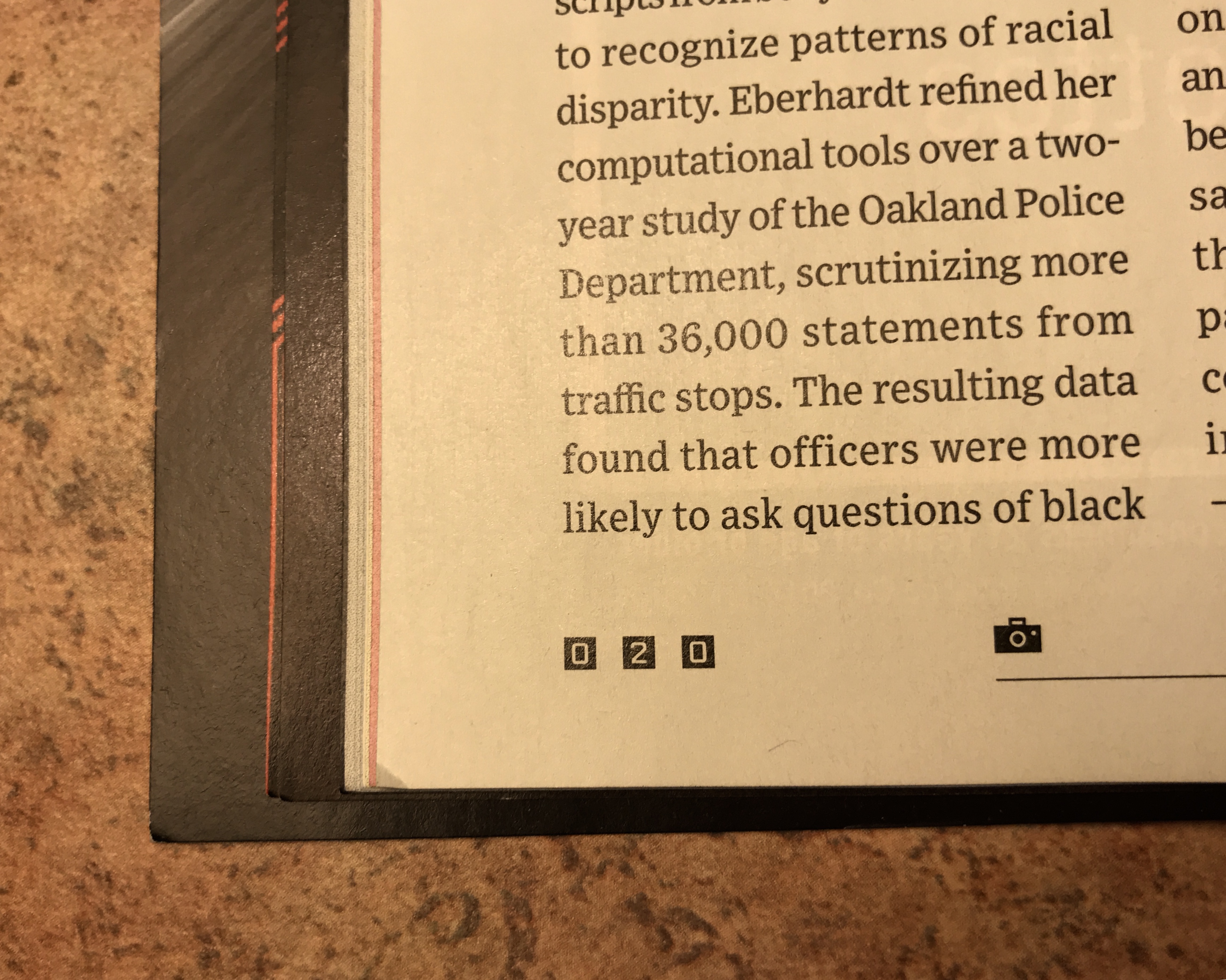 They are framed by tiny black rectangles. The style reflects some of letters in WIRED’s nameplate.

Of course, note that the name-plate of the January 2017 issue disappears into a black-hole, a portal, the literal unknown. 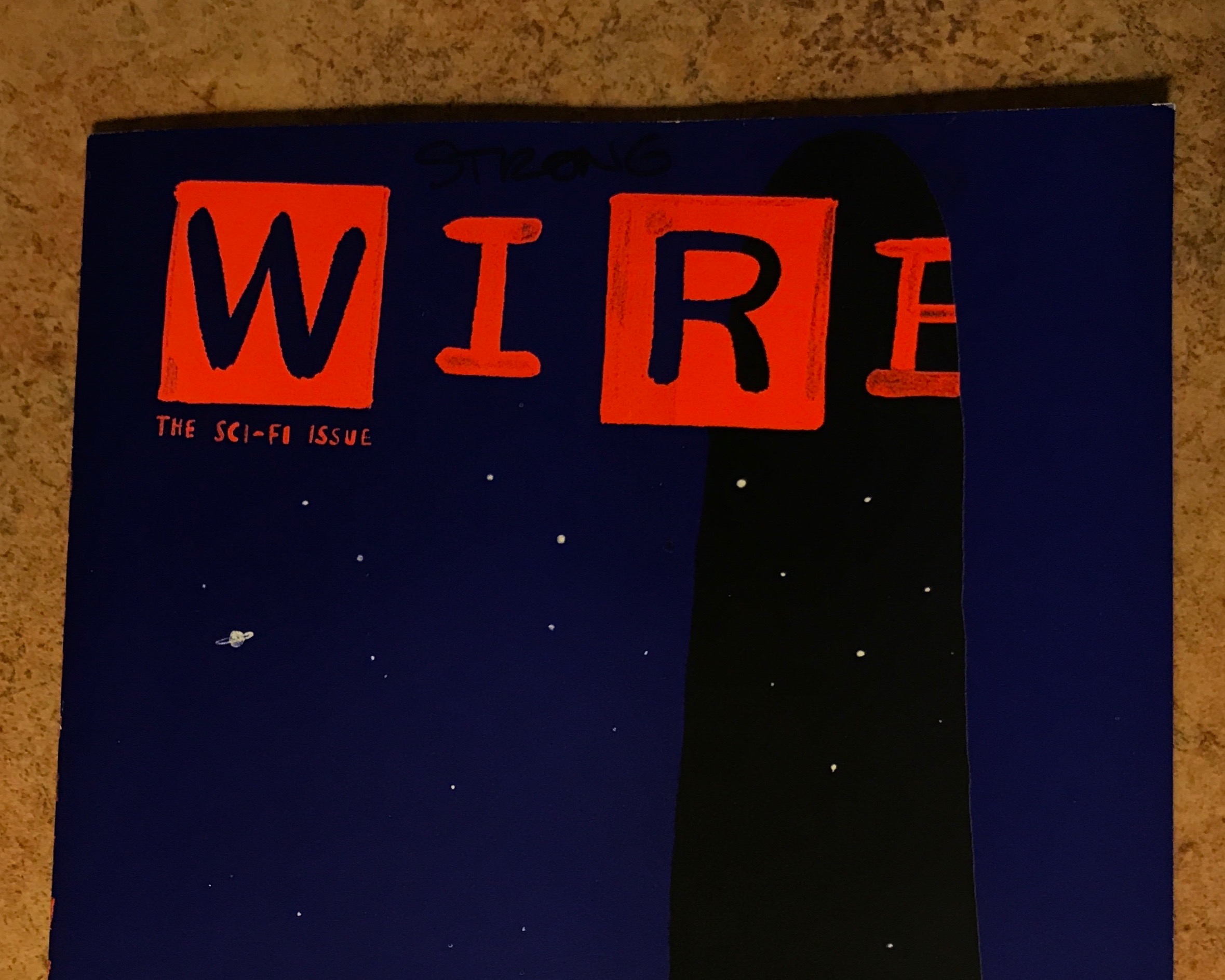 How are WIRED’s inside stories represented by the cover lines?
WIRED’s stories are barely represented by cover lines. It will be one story mentioned at maximum — if that. While cover lines are sparse across these three issues of WIRED, the January 2017 issue doesn’t have much of anything on its cover. “Tales from an uncertain future” is a quiet for all things science fiction.

How is information organized and prioritized? What is the hierarchy of elements?
Almost always, WIRED’s table of contents is organized in boxes, within columns. At the head of these columns, a grand, regal serif typeface announces the section. In a bold sans serif font beneath it, quippy macs.

The sections are 25.08 (a play on 24/7), Alpha, Gadget Lab, File:// and Ask a Flowchart. 25.08 takes care of business, such as editor’s notes and a preface for the issue. Alpha is WIRED’s front-of-book section. Gadget Lab boasts regular pages such as Fetish for luxurious tech tastes, Top 3 for editor’s picks and Gearhead for coveted but attainable devices. File:// contains topical reporting and precedes the big feature. Ask a Flowchart is WIRED’s back of book content. 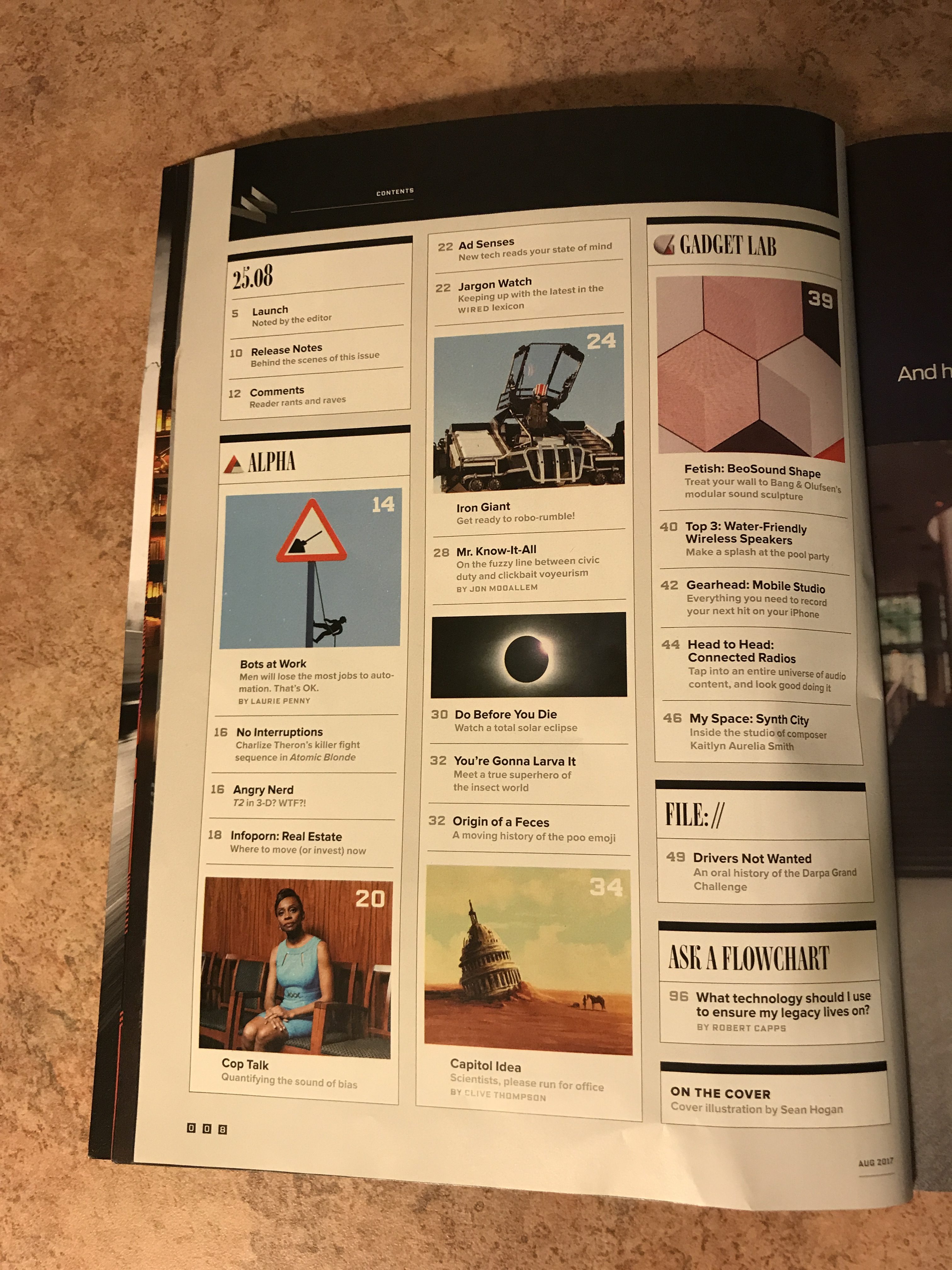 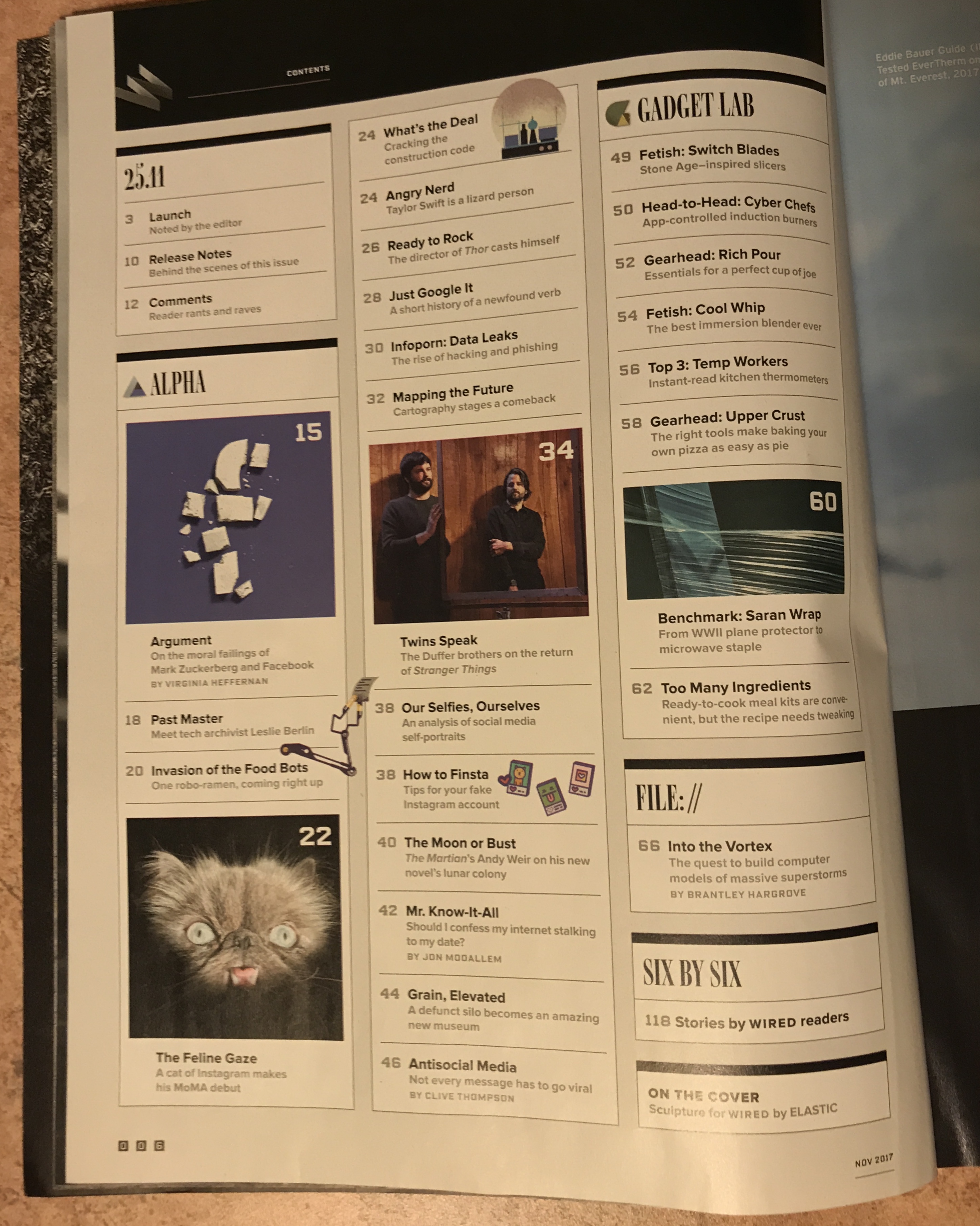 WIRED’s January 2017 issue has an unusual table of contents. It’s all minimalist illustrations and literary-looking text, in pale, muted colors, against a solid black background. It gives off the illusion of WIRED’s stories hanging out right there, with the stars and heavenly bodies, in space. 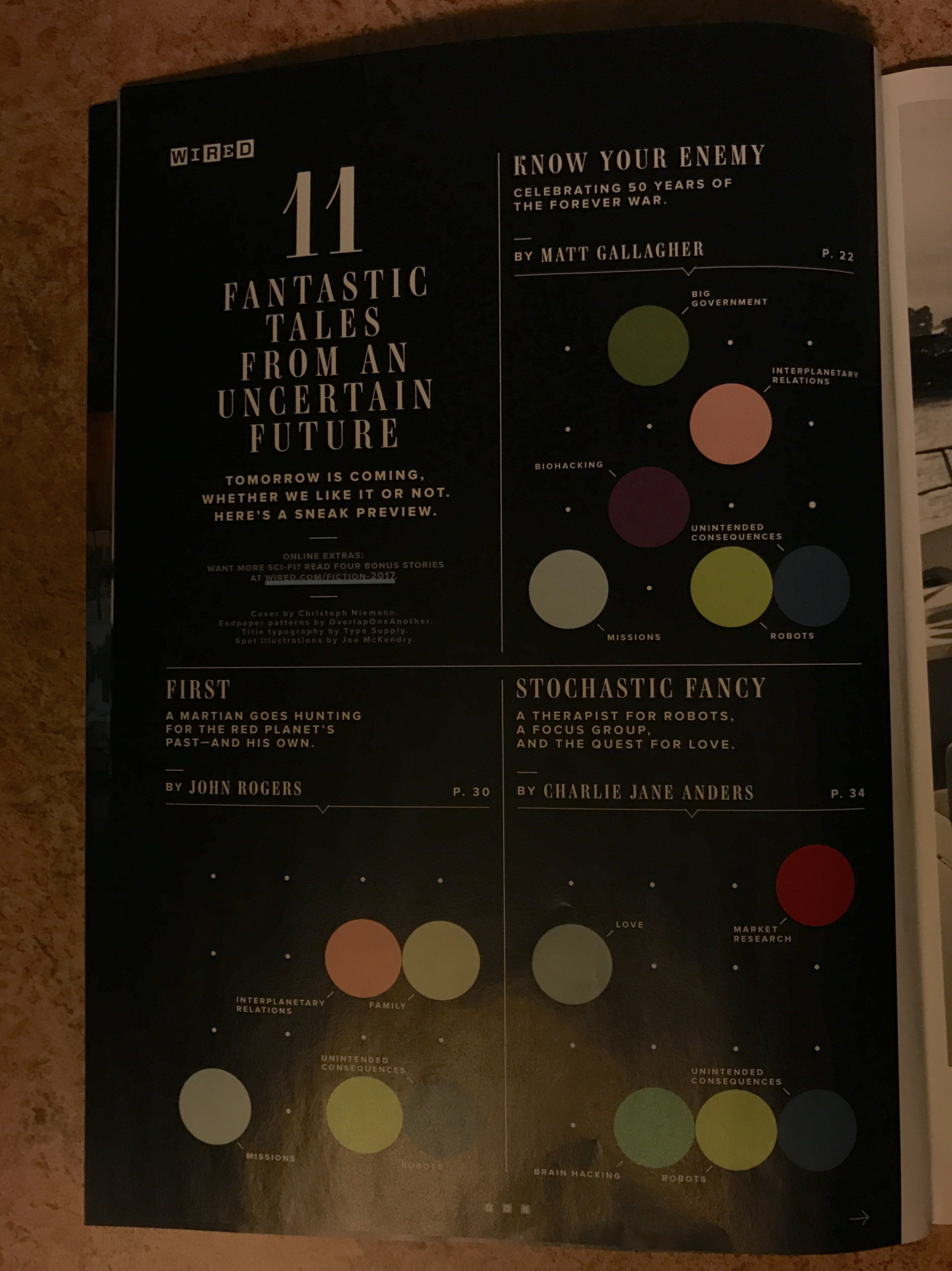 January 2017: Table of Contents, Exhibit A 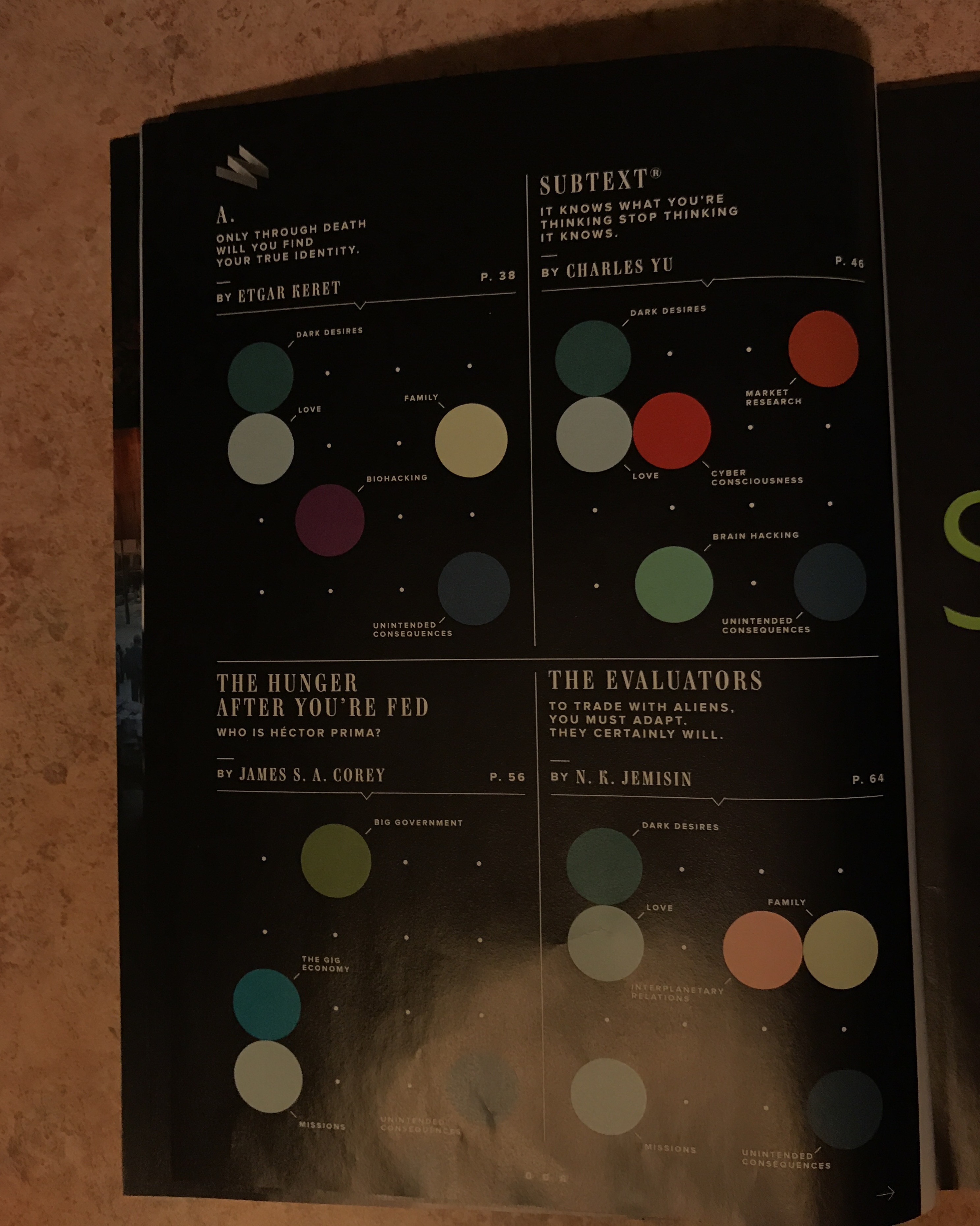 January 2017: Table of Contents, Exhibit B

The Sci-Fi Issue is also unusual because it contains 11 stories, whereas the August 2017 issue consisted of 24 articles.

How is consistency maintained from issue-to-issue in WIRED?
For the most part, regular sections, and the strong photographic element maintain the WIRED look and feel. It’s for that reason issues like the January 2017 one come off as so incredibly different — it breaks all the rules.

A change I noticed throughout the years of WIRED issues is the addition of “Create. Connect. Condé Nast.” at the bottom of WIRED’s spine. 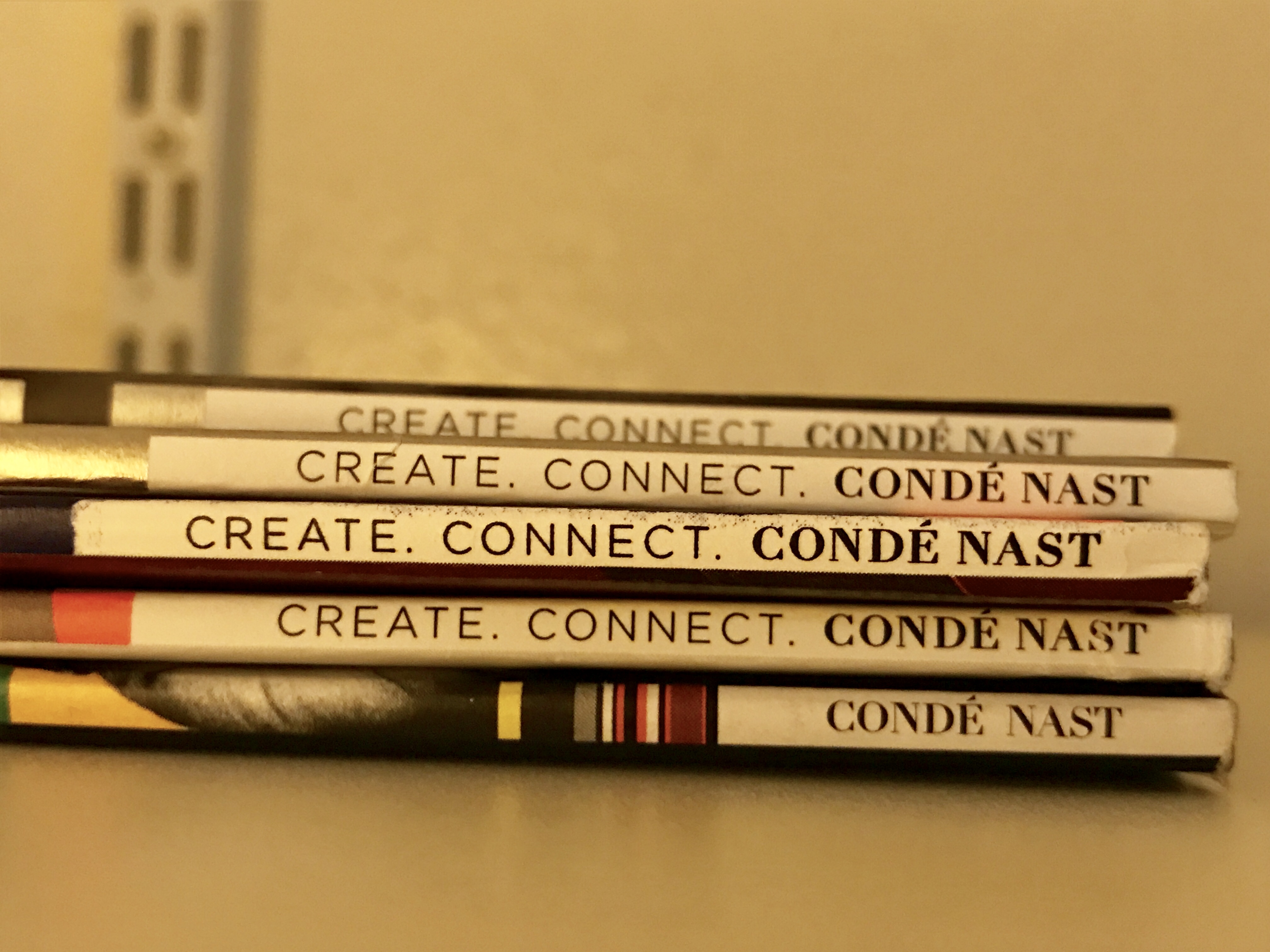 What is the tone + attitude of WIRED’s cover? What kind of message does it send about the content?
WIRED’s covers are provocative. They aren’t quite so in the way a Cosmopolitan or Glamour would be, although I’d argue WIRED’s covers are just as stimulating. WIRED really catches a reader’s attention by wedging itself into the philosophical part of their brain.

It sends the message that, in an industry where we have GQ to help your personality sparkle and Teen Vogue to nurture your heart and closet, WIRED will address your curiosity and feed your inquiring mind.

Bottom line: I would say WIRED organizational design appears to be collected and functional, with just a dash of strange to keep you on your toes.