The words of The National Post play a large role in the entire design of the publication.

Headlines for The National Post differ from day to day. During the week That National Post rely’s on a large hammer above the main picture on the front page. It may not be the only story on the page, but it does stay true to form. The hammer is used for the main story for that day. Accompanying the hammer is a deck of about 3 lines. Even the ‘less’ important stories on the page keep standard headlines. Each with about 3 lines of text. The headlines rarely have subheads. The newspaper does a really great job of keeping the headlines straight to the point. The tone is clear and concise. 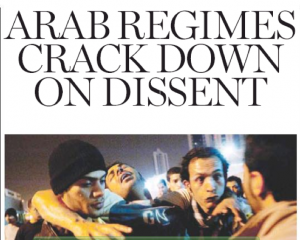 Bylines and Credit lines are also very standard. If the reporter is just the report, then they will have a normal byline with their name. But if the reporter has a specific title, the title will be displayed underneath their name in italics. I think this is the best approach for bylines. They should be simple.

If it’s one thing that The national Post keeps different is the fact that their promo’s and refers are actually very conversational and a lot less straightforward than a lot of other things. I think this is due to the fact that they have to make people WANT to go to that story. If things were too stiff then it would not make people want to read them.

Section and Department names of The National Post are neither creative nor something special. The newspaper is divided into 4 major sections: News, Post Sports, Arts and Life and Financial Post. They are straightforward, just like the rest of the paper. It’s one thing The National Post does well.