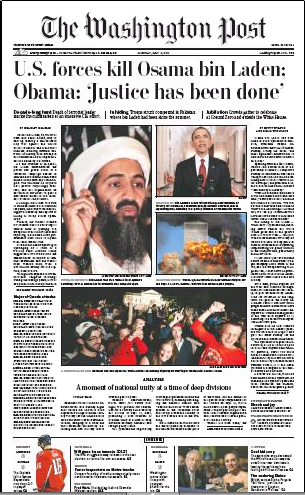 Before taking this class, I must admit I never really analyzed the design of newspapers. Thankfully now I can happily say I’ll never look at them the same. Because The Washington Post was my paper of focus, I’ve definitely been influenced and inspired by its design choices. I never actually expected design to factor into the message, philosophy, and tone of newspapers as much as it does for magazines and advertising. But after interpreting and drawing conclusions about the Post, I realize how wrong I am. Yes, the paper’s controlled, active, and catchy words shape it’s identity. But the design supports and enhances its personality, and it draws readers in at a simple glance. Because I’ve always considered newspapers to be an authoritative and reliable resource, I’ve been very impressed while studying the Post. Not only has it satisfied my understanding of newspapers, but because the newspaper strives to innovate and individualize itself, I have set higher expectations for all other papers—including my own prototype.

A list of everything this newspaper does well would be exhausting. A few choices that stand out in my mind, however, include being innovative, creating catchy headlines, selecting identifiable and powerful photography, and effectively using hierarchy to guide the readers. After studying the website, I’ve come to recognize the transition that many newspapers are undertaking at this moment—that is, the adoption of the web is becoming more and more important for graphics and news. By isolating an entire section for multimedia, which includes infographics, videos, and slideshows, it’s very clear the Post knows where newspapers are heading—and they’re not only keeping up with it, they’re ahead. When it comes down to it, the paper has identified itself as a writer’s newspaper. For this reason, I appreciate how the headlines are clearly prioritized. They read easily and actively to complement and tell the story quickly. As for design, while studying the newspaper I’ve come to realize how strongly the Post utilizes photography—but not only in the selection process. It also creates photos that feel like the Post, not just like the event it represents. This seems like a huge challenge and one that I admire the Post for overcoming. Other design choices such as layout, typeface selection and sizing, along with placement of furniture has also made the paper’s hierarchy very clear, easy to follow, and it allows the paper to continue feeling authoritative—much like The New York Times. Also, another strong point of the publication includes the different sections. Even though sections like style and health have very different attitudes and stories, the design effectively and interestingly depicts these tones while surprisingly maintaining the feeling of the overall newspaper. One thing I’ve discovered in my own prototype is the importance of a color palette in continuing newspaper identity. And while I’ve mentioned that the color could be boosted a bit throughout the printed version, I think the classy black and white with a few touches of bright colors like red have helped unify the different sections.

Keeping with this discussion on the color scheme, I think it could be an area worth reconsidering for this newspaper in the future. While I completely understand and respect this newspaper, I’m not sure if the movement to the internet my put more demand on the look of the printed version. It catches my eye now that I’ve studied it, but it’s possible that minor color variations could uphold the identity while still appealing to younger readers. But it’s also possible that because the Post is generally ahead of the movement and is focusing on its web presence, that maybe the color of the printed version is not so much a priority.

Whatever the Post’s reasoning is for its design choices, I’ve been overall quite impressed and inspired. And I intend to continue looking at it and at other newspaper fronts to become more well-versed in newspaper design.