In You Only Live Once book has 3 type faces which are serif, sans serif and decorative. In each part, the use of each typeface differs, while each story title’s typeface is sans serif and the passage is serif, smaller lists of passages are in vice versa – serif titles and sans serif passage. The color used are mainly black for most texts, but there are other colors used for some titles which are blue and orange. The overall theme gives a sense of travel in sophistication. Details are shown below. 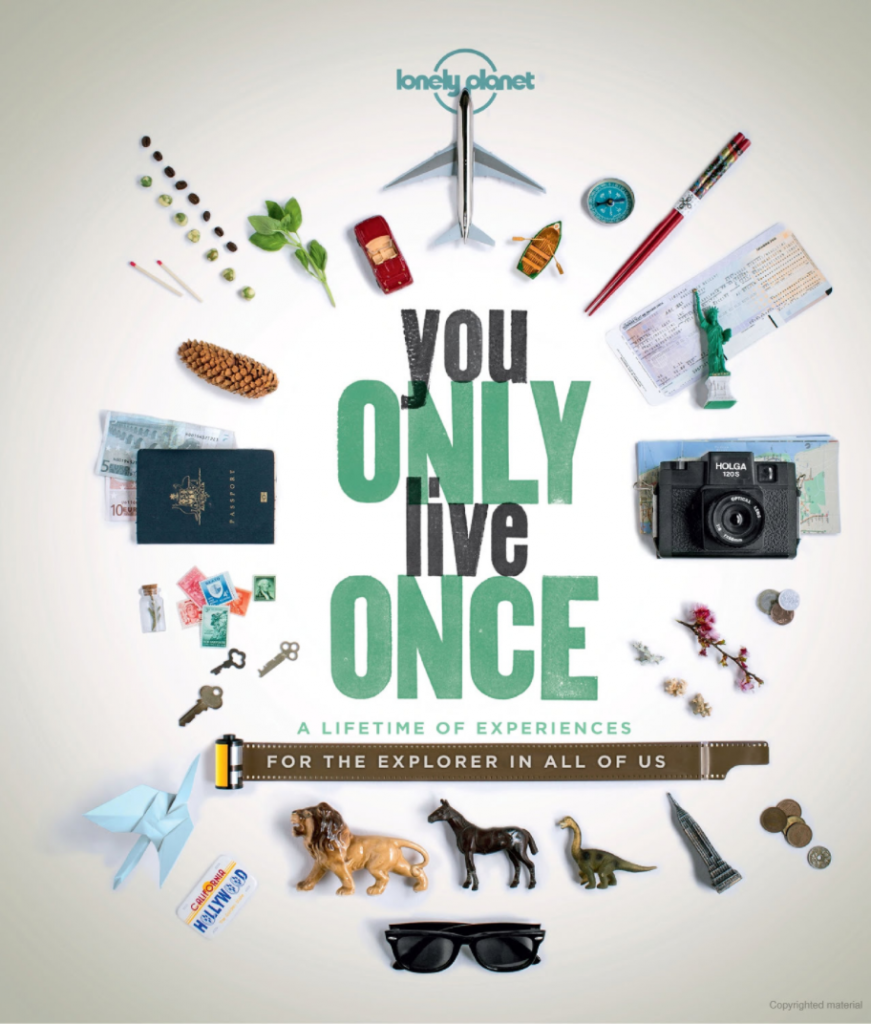 The typeface used for the book title on the cover is sans serif in bold and large size. The sans serif font makes the mood strong, clean and determined. This book is about traveling and experiencing different phenomenons around the world, by emphasizing the word ‘only’ and ‘once’ in capital letters reflect the tone of the book. Yet, having the words in green not only does it create a contrast from the word ‘you’ and ‘live’ but it also gives a sense of life and nature which is what this book is about.

In addition, the tagline uses smaller size font but all in capital to make a bold statement on what the book is about, but also to separate it from the book title. The first part of the tagline is in green to emphasize the message that this is a book about ‘a lifetime of experiences.’ The second part of the tagline is in white to create contrast from it’s background being the filmstrip to able the reader to read the text easily but it also highlights that this book is for the explorer in us. 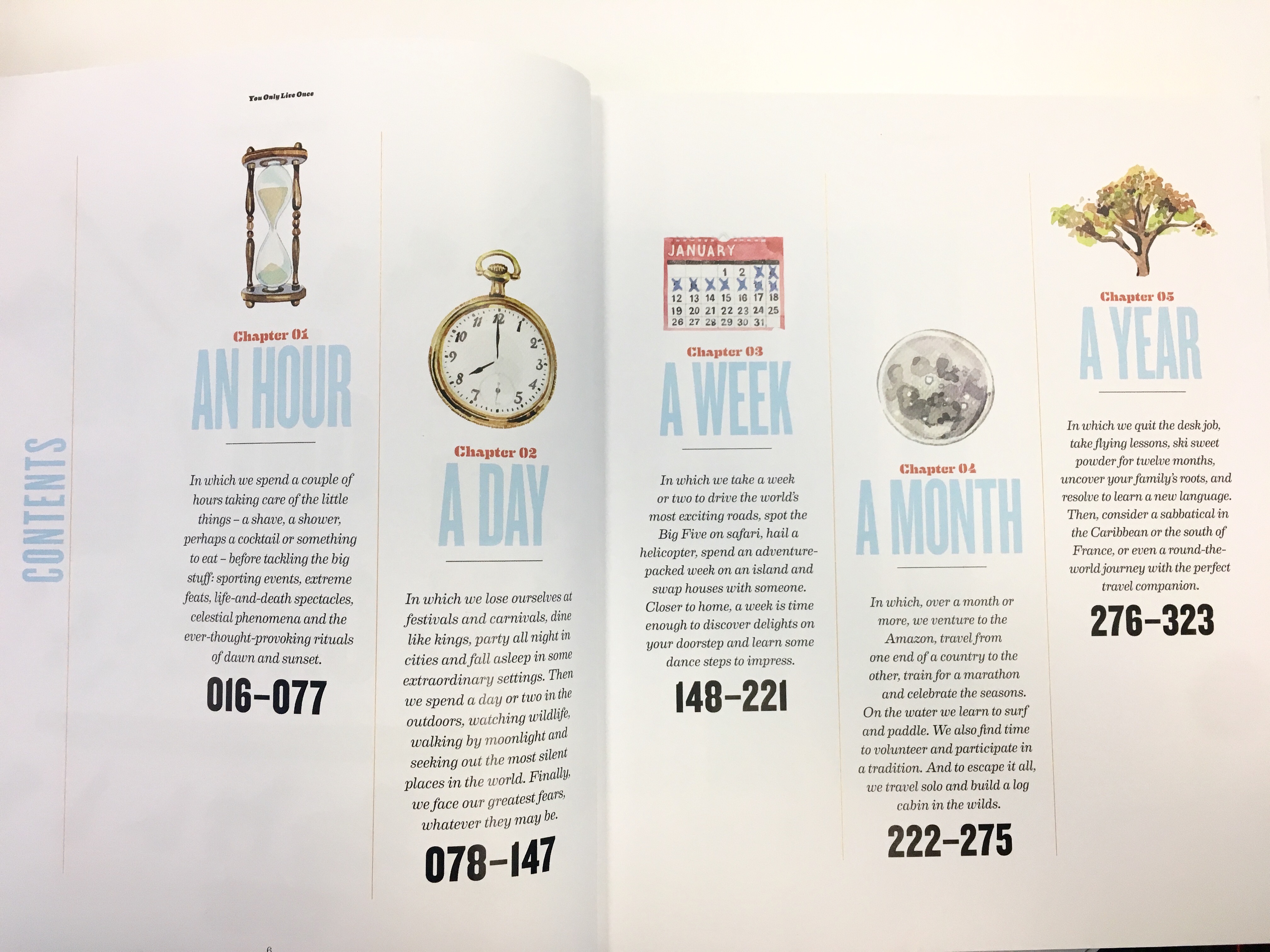 The color for the typeface is a very effective way to determine the differences between the title and the passage, but also the font size as well. On the content page, the blue color is used for the main subjects of the page which are the chapter titles and the title ‘contents’ itself. The type face is sans serif to send a direct, bold message with blue color to give a sense calm, peacefulness of nature, which again associate with travel.  The chapter titles have the biggest font to show its highest ranking of importance on the pages. Above the chapter titles is the chapter number, however, the type face is decorative, in smaller font and orange. This gives a sense of playful, but it does not override the main concept of travel in sophistication.

The typeface for the details about the chapter on the content page is serif which differs from the rest of the book, as the longer texts are treated with sans serifs font for the rest of the book. However, with this concept, it creates excitement and introduces us what the readers are about to see. The long texts are still black for the whole book.

The page numbers are in bold, black, sans serif type face, but the size is bigger than the long texts to help readers quickly see which page to look for. 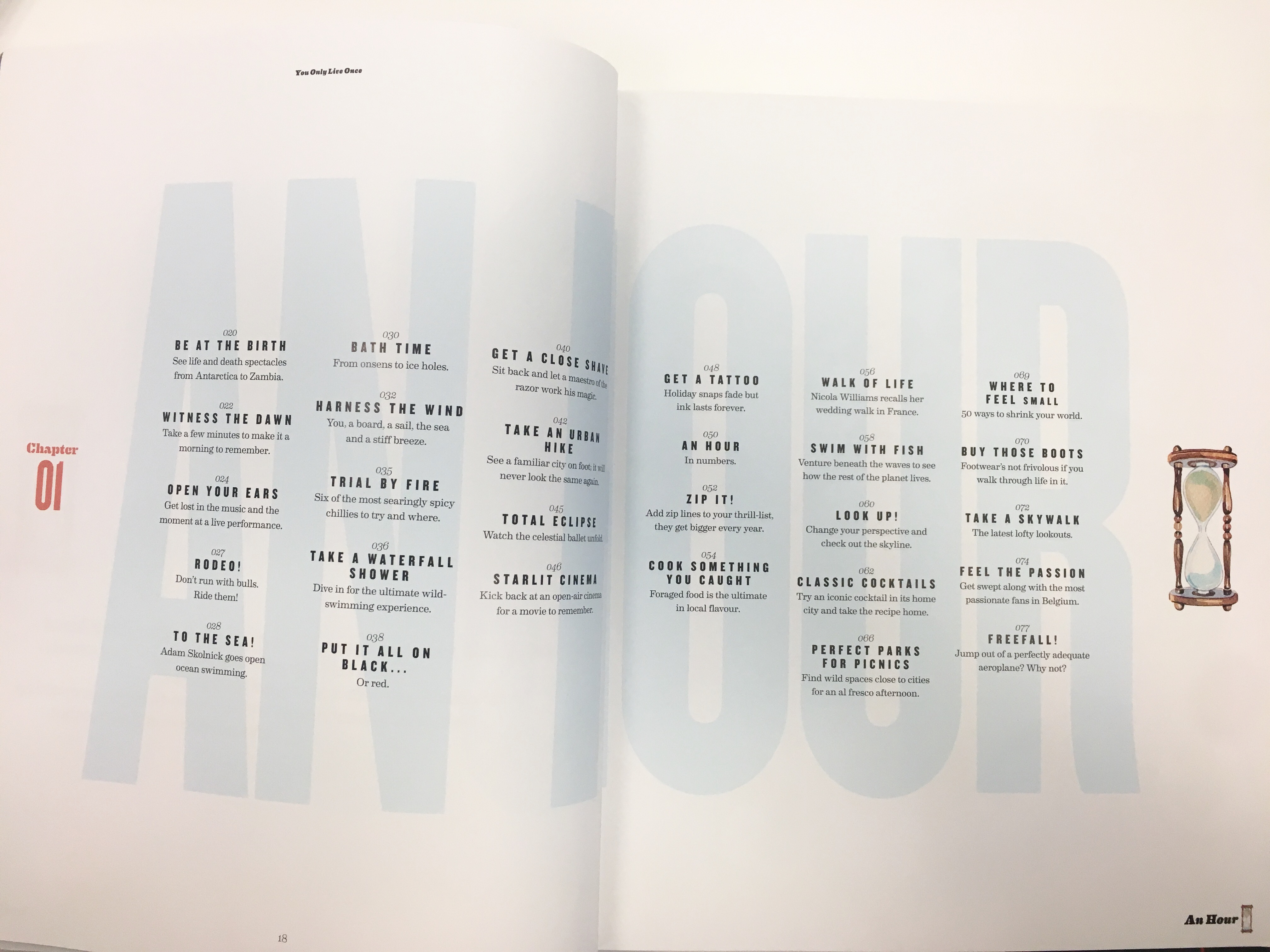 The typeface theme for the content page and the section page are very similar to each other. The typeface for the Chapter number is the same as the content page, and is the same throughout the book which is decorative, orange font. The chapter title is sans serif, big and pale blue color in large size to cover the page spread. The pale blue color allows the texts on top to still be readable. The story titles are in bold, sans serif font to keep it clean, neat and give a sense of sophistication. While the tagline below the story gives more flavors by having a serif font and in smaller size. 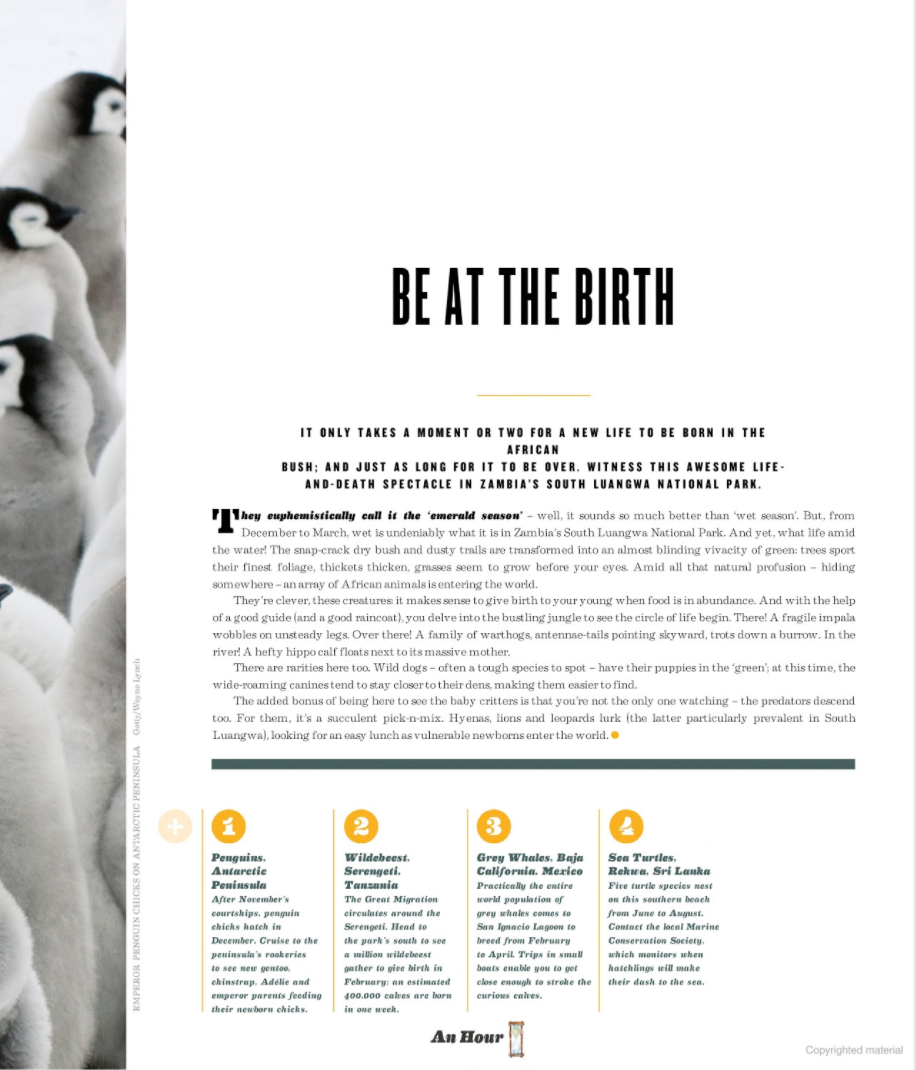 The typeface used for the title and tagline is sans serif, to keep the main message looks nice and clean. The rest of the passage is serifs. However, the first sentence of the passage is often in bold to introduce the story and catch the readers’ attention. The boldness and size are also used to determine the hierarchy. The thicker and bigger typefaces (also in capital letters) are the titles or taglines, while the smaller typefaces are the story. 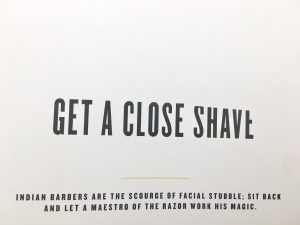 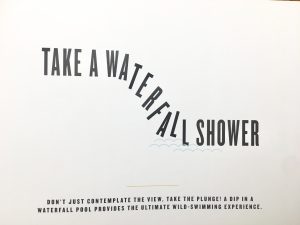 This book cleverly use the arrangement or play around with typography to make the the typeface reflects what the story of this story will be about. For example as shown in the picture, the word shave has been ‘shaved’ or cut a part out to reflect that the story is about shaving, as for the waterfall, the letters are arrange to create a waterfall shape.