People that pick up a copy of The Economist are looking for intelligent articles that will not only expand their own understanding of the world, but to also appear as if they are the smartest person in the world. The name itself alludes an occupation that only those with a certain skillset can achieve. The Economist is worldly and someone that you want to engage in conversation with.

The language used in headlines in The Economist align perfectly with the brand’s image: intelligent, a little cheeky, and British. Since The Economist is a world news magazine, the headlines don’t stray far from the point. For example, in an article about youths getting caught up in gang violence in Brazil, the headline is “Dying Young”. Though morbid as it is, it captures the reader’s attention without being too boring, or on the other hand too funny. There are sub headers that separate the shorter articles, and they follow the same style as well.

When it comes to pull quotes, The Economist does not use them. I believe the design team made this decision because they would distract the reader from the text. Or, perhaps they believe that all the copy is so important that they can’t pick what to highlight! However, when it comes to captions, the language and the image go hand in hand, and this is where the publication has some fun. For example, in an article about bike sharing in China, the caption to the image is a pun. Though it is a pun, it’s not one that makes you roll your eyes. It elevates the story in a way that the reader wasn’t expecting. 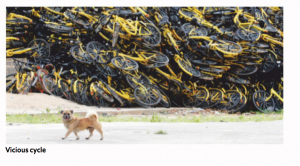 Finally, when it comes to department heads, The Economist reads like any other news magazine. They are simple and straightforward without much personality. The Economist makes up for this with use of clever language in other aspects of the page.