National Geographic is known for its images, as a highly photograph-driven magazine with some of the best photographers in the world as contributors. The images are typically of nature, though some capture cultures described in features. 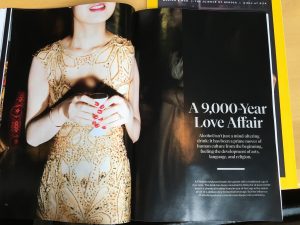 Images often run full-bleed, taking up an entire spread, with minimal text. The images are always serious and sophisticated, never goofy or overly casual. They’re typically wide shots with a wide depth of field, meaning that the entire image is in focus. 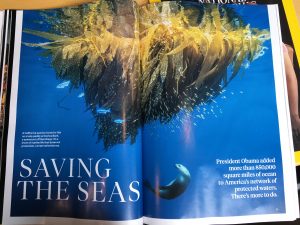 Images are almost always rectangles, with very minimal cropping. Type is only placed directly on images if it’s placed in “white space” of the photo—captions are placed in dark corners where the type doesn’t actually cover any details of the photo. 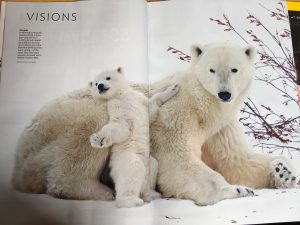 Subjects are often active, but Nat Geo does a great job at making active subjects seem calm and steady, seemingly urging the reader to take it slow through the magazine. Photos are used on almost every page, and they tell much of the stories. Multiple photos are used for feature stories, and each typically gets its own page or spread.