The National Geographic nameplate is made up of a serif font, which was recently rebranded to be smaller on the cover. In November 2016, NatGeo released its first rebranded issue with the smaller nameplate — previously, the nameplate had stretched across the cover, spanning the entire width of the image inside the yellow margins. The smaller nameplate makes the cover more sophisticated and contemporary.

After searching many different platforms for the name of the nameplate’s typeface, I think the serif typeface used is a custom typeface used only for the NatGeo brand, called NatGeo SemiBold. The same typeface is used inside the magazine for feature headlines, body copy, folios and pull quotes. 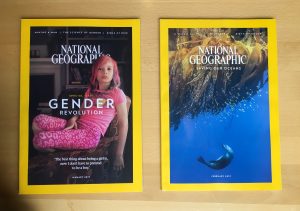 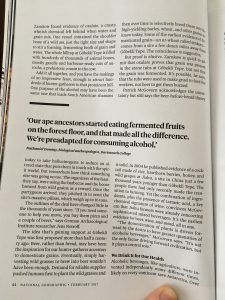 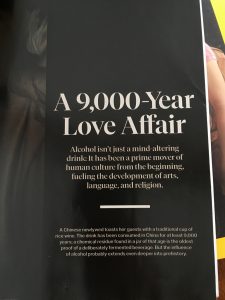 National Geographic uses two san serif typefaces in addition to its serif typeface. On the cover, everything other than the nameplate is in one san serif typeface: another custom NatGeo typeface, but closely resembling ITC Stone Sans SemiBold. This typeface is also used inside the magazine for the Department fronts, the headlines of stories on the Contents page, as well as headlines for shorter articles.

The third typeface — the other sans serif — looks similar to Arial or Helvetica. This is used for captions inside the magazine, as well as story descriptions/photo credit on the Contents page. 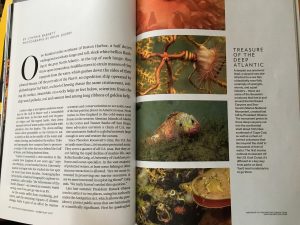 The simple typefaces used in National Geographic establish the brand as sophisticated and professional, and allow the photos to speak for themselves without overpowering the photography with type.