When The California Sunday launched its debut issue in 2014, Creative Director Leo Jung said in a 2015 interview with Typeroom that he had four requirements for the “workhorse” typeface that would be used in the magazine: It wouldn’t be popular among designers, it would fit California’s tone, it could be used for serious and more lighthearted stories and did not compete or look similar to the logo. Jung chose Foro, a sans serif typeface by Dieter Hofrichter. 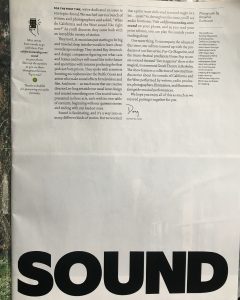 “SOUND” in Foro as seen in the October 2016 issue of The California Sunday.

Jung selected Sina Nova, a serif typeface, for the body text and Equip, a sans serif, as a display type — both of which are designed by Hofrichter. 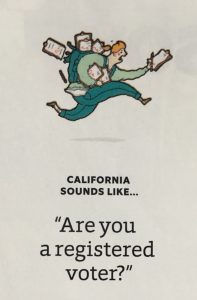 “Are you a registered voter?” in Sina Nova as seen in the October 2016 issue of The California Sunday. 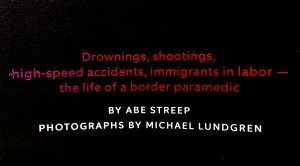 “Drownings, shootings, high-speed accidents, immigrants in labor — the life of a border paramedic” dek in Equip as seen in the August 2016 issue of The California Sunday.

The three fonts tie the magazine together in a way that is clean, refreshing and just bold enough to leave a significant impression that isn’t jarring in the slightest. In addition to having been all been created by the same designer, the fonts work well together through the shared traits of a modern look that guide readers’ eyes through the pages of the publication. Foro demands your attention as the bold start of a section, story or shorter feature; Equip works are the simplified cousin of Foro and will lead you to a sleek subhead; Sina Nova will then contrasts Foro and Equip with a serif body for a text that has personality, but doesn’t take away from the information it is presenting.

The California Sunday consistently uses similar weights and sizes of Foro, Sina Nova and Equip to perform similar functions, which builds on the publication’s branding as a young magazine and ensures the type isn’t calling more attention to itself that it needs to.

The magazine also tends to avoid incorporating drop caps into text but instead opts for a bold first few words or a subhead of heavier weight. 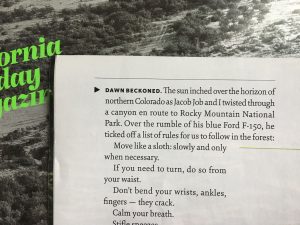 A bolded piece of text in place of a drop cap as seen in the October 2016 issue of The California Sunday.

This small, but pointed decision characterizes what the primary design goal of The California Sunday: It wants to frame its stories in a serious way that mirrors the standards of classic national magazine presentation. But it’s not at all traditional and it wants you to remember that.