Harpers Bazaar uses HTF Didot, which is a serif typeface that has become synonymous with the magazine because of how heavily they incorporate it into the magazine. HTF Didot was created in 1991 specifically for Harper’s Bazaar’s redesign and this typeface has won magazine awards because of how it has been presented. It is used for the typeface and for virtually all display copy including the font used for department sections and headlines. The nameplate is more kerned then the HTF Didot used in other sections of the magazine. 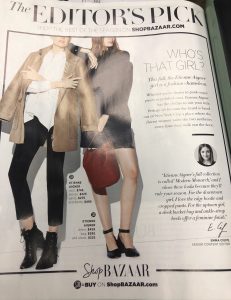 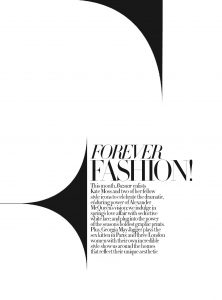 For body copy, they continue using a delicate serif typeface but Didot serifs are much too delicate to read well for body copy. For cutlines, they use a sans serif typeface with a bold weight. The typeface clearly exudes elegance and high fashion because of the stark contrast between the use of both thin and thick strokes in the letters. Harpers Bazaar will use HTF Didot in any instance that it is legible because it has now become a part of the brand identity. Harpers Bazaar uses it in varying font sizes. 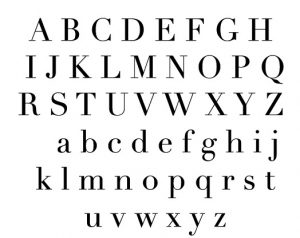 This typeface looks timeless which says a lot considering it has been used by the magazine for almost 30 years. Just by looking at the typography, the reader can tell that Harpers Bazaar is a refined, posh magazine. This can be felt because of how the thin ascenders and serifs play with the boldness of the stem of the letters.

The name “Harpers” from Harpers Bazaar comes from the Harper & Brothers company that has founded Harper’s magazine as well as Harper Collins book publishing. A bazaar is a market or shopping quarter that sells goods, so the name roughly translates to Harpers market. For someone who isn’t familiar with the magazine, they would have no idea that is a fashion magazine just by looking at the name. I think they are able to not confuse people with the name because it is a historic magazine and because the Harpers is very small in relation to Bazaar. I would say that without the strong typography, the essence of the magazine would get lost because the name is not related to fashion in any way. I don’t think that the name alone is successful in conveying the meaning and identity of the magazine. I think that since it is a legacy magazine, people are aware of what Harpers Bazaar is as a brand, but none of that is due to the name. 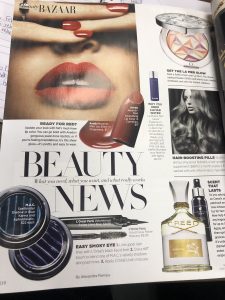 Harpers Bazaar stick to quirky, up-beat puns and alliteration in its headlines and cutlines, which makes the clothing featured and overall content feel more lighthearted—although the prices on the aforementioned clothing remains exorbitant. Words are used outside of body copy to annotate, describe, and categorize the photos that are being featured on the spreads. They make the photos complete so that the reader knows what they are looking and more importantly, why they should be looking at it. The language of HB is not too formal but it is also not too casual where it seems like a blog or a diary. The word choice is playful but also mature enough so that their older readership isn’t turned of by language they deem as immature. This is effective because I think that the typeface that HB uses can come across as authoritative and rigid, and the language used throughout the magazine counteracts that but in a positive way. The headlines are virtually never more than five words. They like to have succinct headlines and go into what the article is about in the deck. They don’t use subheads either, likely because they also want to keep as much of the whitespace on the page as they can. 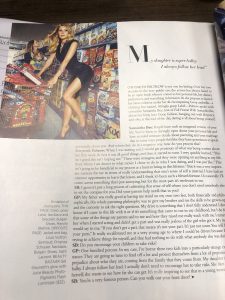 Pull quotes are used sparingly in feature articles and if they are used, they are not put in the middle of the text, but rather along the edges in white space. They are also never attributed because they are usually used in one-on-one interviews, where it can be assumed that the quote is from the subject getting interviewed. They usually are self-explanatory, but the editors try to choose the most tantalizing or unexpected thing that the person would say to pull quote. HB doesn’t use cutlines or caption on every photo on any a given spread, they keep it short and sweet most of the time because they like to incorporate as much white space on the gutters and margins as possible. They don’t stray away from what is in the written story, and try to provide additional context to what photo they are showing you. 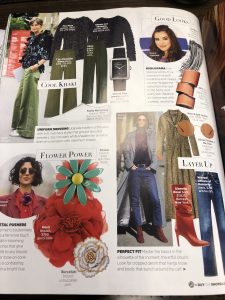 The labels that are used in the magazine are usually to clarify or create groups so that nothing seems out of place and that everything has a home. They are especially used in the fashion and beauty departments because they can act as explainers for what the reader should do with the product they are featuring. They are straightforward, but have sass because that is the language that HB wants to portray to its audience. The bylines are right under the headline or in the left hand corner of the page after the first paragraph. They usually just say “by” and the name of the writer or they may say the name of the writer and “investigates” for some of the feature stories. The promos and ads that they have vary in length, but are typically long, and seem very scripted and commercialized and don’t fit in with the voice of the rest of the magazine. The department names are very straightforward for the most part. Some of them are creative but many of them are not for example: the news, the style, the watches, the extras etc. 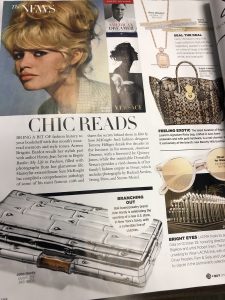