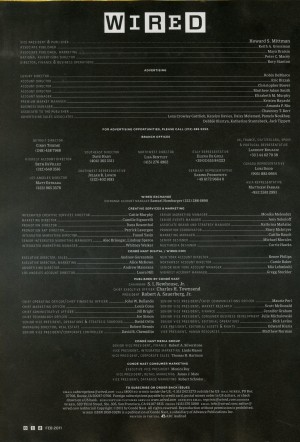 Reverses – Wired uses this technique of printing white type on a dark background
very well for their masthead, where staff is listed. Going against the usual white
masthead with black writing. It not only sticks out, but makes the reader look at it,
read pieces of it, all because it’s unexpected. It also flows with their unique design
style of the magazine. 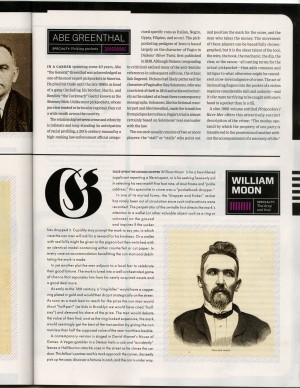 Boxes – This publication uses boxes in very interesting ways. In the photo shown,
for the article Grifters, Buncoartists, and Flimflam Men boxes were used in order
to separate different pieces to the story. I thought this was a great way of doing it,
instead of using subheads. Boxes are tools used for organization within an article or
story and this was definitely what this design did.

Nameplate – This is the magazine’s logo that should be timeless and at the same
time say something about the publication. Wired has a nameplate like no other
publication. Although it changes color from month to month, the bold boxed letters
do not. It is easily picked off of newsstand shelves and easy to read. It also stands
for what the publication stands for. Solid information presented in a unique and
interesting way. 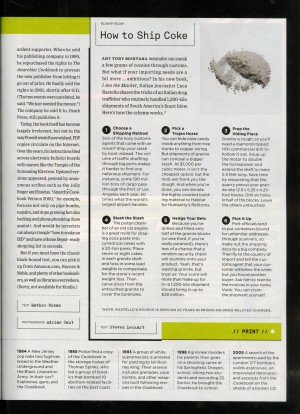 Sidebar – Sidebars, small stories to accompany a main story or can serve as a point
of entry into the main story, are used sparingly in the February issue. The sidebar
pictured compliments the story well, uses a different design that separates it cleanly
from the story. 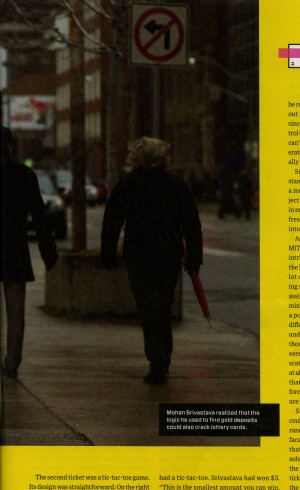 Cutlines – Wired does not do a great job using cutlines, the captions and credit
information for photos. This example is one of few used throughout the entire
publication. Other photos and illustrations were left without any caption. Many of
the photo credits weren’t anywhere near the picture, but rather at the end of the
article. I didn’t like this and thought it was a poor design.

Bylines – Just as the photo credits, bylines, which lists the writer of the piece,
weren’t easily found in some articles. In the picture from Wired above, this byline
is messy and hidden within the folio. It is not clear and does not stick out to the
reader. I don’t think this is fair to the writer either.

Pull Quotes – These are sentences pulled from the story that can be used as an entry
point into the story and are in high contrast with the body copy. Pull quotes should
also be pieces of text that are meaningful to the story. Wired does not use these
regularly or very often. I found this pull quote in the last story of the issue. I like how
they break the grid in the third column, it adds a bit more to the design then if they
were to just follow it. 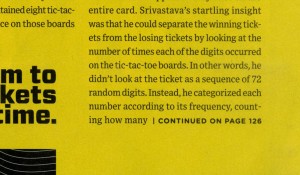 Continuation Line – Wired uses continuation lines very minimally. One story in
the entire magazine had a continuation line, or a line that line of text that tells the
reader on what page the story continues. I like how they used bold text for it, which
differentiated it from the copy text. 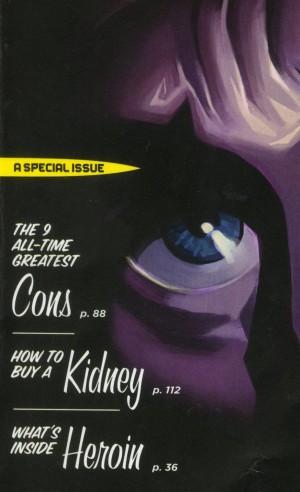 Teasers – The magazine used great teasers, or blurbs that promote and item on
the inside of the magazine, on the cover of the publication. The clips where short,
punchy, and made me want to read more of the articles. Above is a picture of the
three teasers that caught my attention. 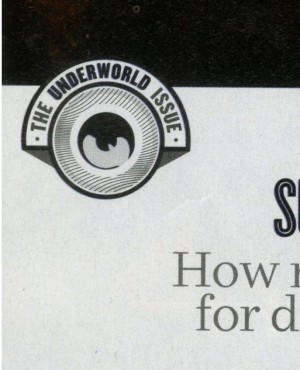 Bug – This is a graphic component with a personality. Throughout this issue, which
was deemed the Underworld issue, has the Underworld bug throughout the pages
of the magazine. This bug is specific to this issue alone and has personality to match
the theme. It’s picture of an eye with words on it makes it look evil…