Cover: One of my favorite parts about our visit to Fast Company during the Glavin Trip was talking to their EIC about how they pick cover stars and how they shoot the covers. As I mentioned in my previous field notes, they feel strongly about picking cover stars who uphold their morals as a magazine and are influentials leaders that are trying to ameliorate the world. When speaking with their creative and photo directors they were very candid about how they approach cover shoots. They both felt strongly about wanting their cover stars to feel comfortable with the shoot. For example, in the November 2019 issue “Capitalism Is Dead” which is the main issue I’ll be using for these two field note entries, their cover star was Patagonia founder Yvon Chouinard. Chouinard is 81 years old and they photographed him in Jackson, Wyoming. My friend Claire Miller who interned for Fast Company last summer spoke to me about the shoot. She said he wasn’t the type to put on makeup or pose in some flashy outfit. So they didn’t try to force him to do any of that. I think this cover is extremely powerful, first of all because there are hardly ever elderly folks on the cover of major magazines, so it definitely stands out. Also, one of their messages is that “Capitalism Is Dead” and this is a great example of not trying to conform to the status quo just to sell issues. 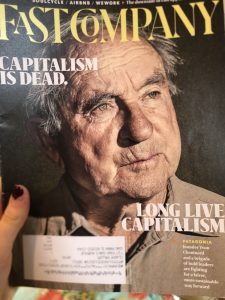 The Norm (photographs): In terms of Photographs in Fast Company, they tend to go with rectangular photos, with a medium shot (not too tight, not too wide) and the subjects almost always have a fairly laid back or semi-serious air about them. They don’t look overly posed or styled, they’re often just standing or sitting with a calm expression on their faces. I think the images are at a medium shot because it holds the subject at an arm’s length. Their goal isn’t to dig into the social lives of these celebrities or business people, they’re not giving an exclusive “tell all” they’re focusing on one aspect of them; their company or business strategy. 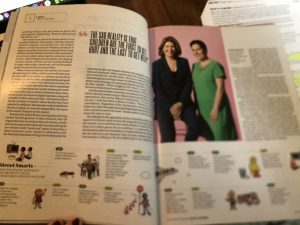 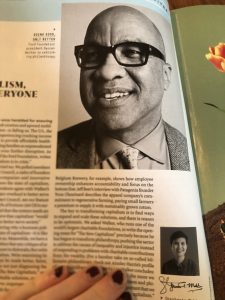 Faces: Fast Company does a lot of profiles or mini profiles of thought leaders, progressive CEO’s or generally people who are making some sort of positive impact int he world of business and technology. The first page in the opening spreads of the profiles are usually a full-page photograph of the subject, sometimes you see their body, or part of it. But the focus is always on their face. I think this is the case because the subject’s are always wearing pretty bland clothing, usually black. I think the absence of garment flair draws the readers eyes to the face of the subject, and thus to who they are as a person and what they stand for. 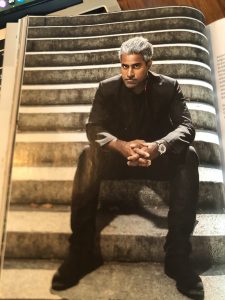 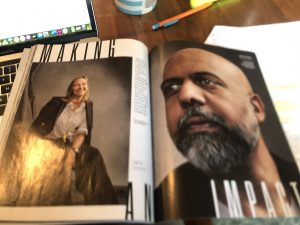 Graphic elements + infographics: Fast Company doesn’t just employ photographs to aid in telling compelling stories. Fast Company actually uses many different kinds of visual imagery, and as I look at it more and more each week, it’s a wonder they all work together so well. I think one of the ways they create consistency is by using the same format of graphic elements and a similar color palette. Sometimes they use a bright blue as the accent color for their graphic elements and sometimes red. In the November 2019 issue, it’s the latter. Fast Company draws on a lot of infographics and lists to create new entry points for readers on most of their pages; especially the ones that are text heavy. I think this is an incredible effective tool that they’ve trademarked as a crucial part of the Fast Company brand. It makes their content more easily digestible for readers who may not be business or tech professionals and definitely for those of us who are visual learners and greatly appreciate little stick figure men telling a story. This can range from the “Recommender” section to a graphic series entitled “The Billionaire Circuit” (second image) as an alternate story form on one of their bigger features. 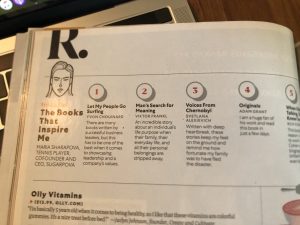 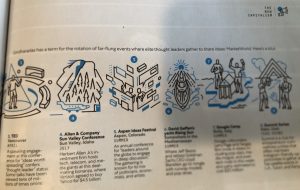 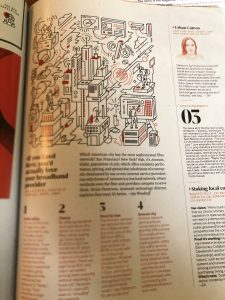 Illustrations & more!: Photography, graphics (especially infographics), AND illustrations—that’s right, Fast Company does it all. I hadn’t noticed illustrations during the first few field note entries, but once I started looking for them, bam! There they were. They’re used sparingly, and aren’t overly stylized. I’ve only seen them used to depict subject’s of stories, and well-known subjects at that. I’ve noticed they have to be recognizable in an illo, and it has to add something that the regular photograph wouldn’t. Below are examples of illos in the Nov. 2019 issue, first of director/producer Janet Mock and then of Elizabeth Banks, two well-known women in Hollywood. 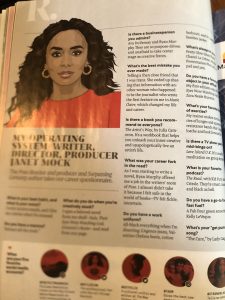 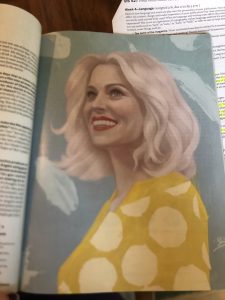 In my opinion, this illustration of Elizabeth Banks makes me pause for a second. she looks almost like an idealized version of herself, but what sticks out to me the most is how her skin has a rosy complexion. Almost as if she’s being seen through rose-colored glasses. And that’s what makes me stop on that page and read the q&a. Which is all about how she’s always portrayed women who are easy to underestimate; and how she’s reclaiming her power.

The oddities: There is some imagery in Fast Company that doesn’t seem to fit a specific niche, but I think that’s precisely what makes it so powerful. The fact that it sticks out, and it’s not afraid to make a statement. Like this soda can covered in a slime-like fluid which paints a clear picture of disgust and a visceral feeling of “yuck.” The opening spread to the “Next” section is a two page graphic spread of robots working in a factory, they have no faces and the color palette they’ve chosen, of cool blue and purple gives an off-putting futuristic element to this spread. The “Saving Capitalism From Itself” spread portrays gears and gizmos and is as paradoxical as the subhead of the cover that reads “Capitalism Is Dead.” and then underneath “Long Live Capitalism.” But I think all of these graphics are to put the reader in a little bit of an uncomfortable position. Because you have to get out of your comfort zone in order to learn, grow and eventually make change. Fast Company’s audience is full of wealthy, middle aged, thought leaders and their encouraging them to be progressive and to absorb how things like climate change and capitalism(some parts of it) are ultimately hurting humanity. 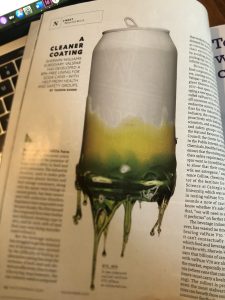 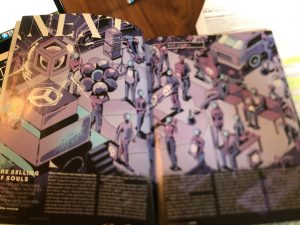 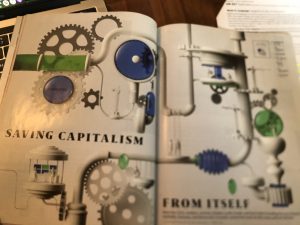