The name of the magazine “bon appétit” and its position on the cover page is the most consistent aspect through all the issues. The same typeface and position on the cover. “What’s in a name?” they say, but I think the entire purpose of the magazine is outlined in the title. I could agree to a certain extent that the title is a bit of a cliché, but then realizing the variety offered by the magazine, I think it is most appropriate. It is almost rhythmic when you call out the name “bon appétit.” Another thing that caught my eye is how the colour used for the title is always in contrast with the cover image and is rarely repeated on some other text on the cover page. The title is also given the heaviest and the densest typographic weight on the cover page which depicts the fact that the title is the most important typographic element.

With the title being given the most priority, another consistent aspect is the subtitle when they describe theme/topic being covered by this issue. They have a very classic sentence for it, and it goes like: “The Holiday Issue” “The Healthy Issue” “The Simple Issue” I think the magazine could get creative in presenting the topic of the issue in a more smart and witty manner but then I think going classic and simple helps them to communicate with a larger section of the society (and it would also avoid misunderstandings & misinterpretations.) They do try adding an extra caption in some issues, but it is not a mandatory text that they keep consistent in all the cover pages. Talking about the text, the issue month and the year is mentioned is given the least importance and typographic weight. It is also located in the least noticeable area on the cover page. 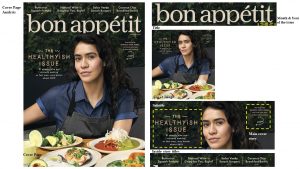 Hierarchy of the elements of the cover page 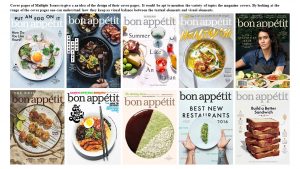 Moving on to the most important visual element of the cover page the cover image. The cover image is either a food-dish/meals or a chef or both or even drinks. The image takes up the majority of space on the cover page, it is large enough to be viewed at a minimum of a foot or less. The cover image is mostly an image of one of the main cover stories of the magazine which becomes 1 of the 4-5 inside stories that are mentioned on the cover page. The inside stories are generally one story from each section. They keep it simple and direct by mentioning the name of the recipe which is the title of the stories covered inside the magazines. They also mention the page number on which the recipe is being showcased.

The overall look of the cover page is very inviting, it persuades you to pick up the magazine from stands. It’s truly a visual treat since its food & drinks. The diversity of cuisines and the pure joy of cooking is celebrated through all their issues. The cover page plays a critical role in depicting their objective through all elements right from the title to the topic & cover image.

Flipping the cover page over, the readers then witness promos of the sponsors of the magazine and they are varied, not necessarily related to food, wine, and entertainment. Usually, they follow for over two spreads after the cover page and they are also present at the last two spreads of the magazine. The way they showcase their promos is that some are over a spread acting as a break page between sections of the magazine. And another way they do it is to use it along with a recipe or story they cover on one half of the spread while the other half is a promo of a food product or food-related apparatus/equipment (not necessary it needs to be an edible food-related item). The 100-page magazine showcases an average of 10-15 promos and advertisements. 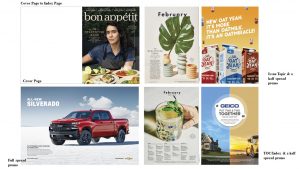 The first 4 pages of the magazine.

As mentioned in the previous field notes on Space, the magazine goes with the classic minimalistic compositions when it comes to layout. Since the content is recipes the magazine maintains the 3-column layout for the text giving images priority on the page. There are times when a small promo of another magazine by the same publication is covered in a 1-1.5 column. The promos are placed strategically so that they do not seem very repetitive and serve as placeholders throughout the magazine. They are spread across all the sections, 3-5 per section in the magazine. The magazine uses these promos as breakpoints between the stories featured. The promos are placed next to pages that have a few images or illustrations allowing the readers to have a look at the promos as well.

The month of the issue is essentially the title on the TOC/Index page. The 100-page magazine is divided into 4 sections: Home, Basically, Away and Etiquette each have a range of 3-6 stories/recipes that are presented. Along with these sections, the mandatory topics the magazine covers are Editor’s Letter, Recipe Index and Sourcebook. Depending on the recipes being featured under each section, they run for about 12-15 pages.  Over the sections, a great diversity of recipes is presented. Each section page primarily begins with having the section title and a small recipe covered on the page or it begins with a front cover story to the inside story which is on the following page. The page numbers are located on the bottom corners of the pages along with the month & year of issue. The name of the section with the name of the story being covered in mentioned on each page except the promo pages, and the pages where they cover a recipe or story on the full spread which is not a part of any section, it is more of generic content. 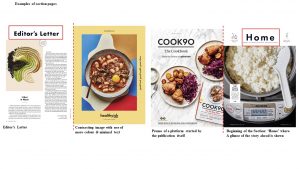 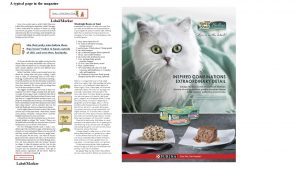 Overall,  there is a pattern or connection in the recipes showcased. A good number of recipes are showcased which are not just for food but drinks too. The thing that works for me is the way the sections progress throughout the magazine beginning with ‘Home’ and ending at ‘Etiquettes’. The entire minimalistic approach works well.  I also think a lot of the organization is driven by the way the images & illustrations of the food & drinks are placed, even their chronological order matters, I believe. In this manner with each story, they build on to the main cover story of the issue. This articulation of the images, recipes & promos is essential. The magazine can obtain a clear and thorough organization of its elements & content within each issue.