A Condé Nast publication, bon appétit is a monthly magazine of food, wine, and entertainment. The frequency is 10 issues a year and the magazines are 100-105 pages, including the cover and back cover. The publication has its headquarters in New York City. Each issue of this magazine communicates concurrent themes and topics related to food, wine, and entertainment from a global perspective. Their primary focus area remains to be the USA but they also have some issues where they have covered stories from other places around the world.

bon appétit is a heavily visual magazine. Along with showcasing good photography of food and drinks it also showcases innovative food recipes that are quick and easy to prepare. The magazine is very clearly categorized into four sections: Home, Away, Basically & Etiquette.

I think the magazine does a decent job of showcasing a variety of food and drink recipes in 100 pages. The aspect that I appreciate the most is that it does not look like a cookbook (even though it describes some recipes very elaborately) The magazine is very engaging in terms of the visuals displayed and the advertisements it promotes. The magazine also creatively integrates the food and drink information with lifestyle and current trends of the society.

The magazine is typically following the 3-column layout, sometimes that deviates to accommodate the images. 50% of the magazine contains full-size images covering half of the spreadsheet and relevant words to the image are written either in a different font keeping it very minimal and direct in its visual appearance. I believe the margins between each column is 0.5” and the size of the magazine is  8″x11”. (I shall reconfirm once I receive the physical copy.)

Since most of the text is recipes, the narrative is bulleted/numbered and is very easy to follow through. The only descriptive narrative is when there is an essay at the beginning of every section and in the Editor’s Letter.

The magazine gives a lot of importance to the visuals and images of the food; thus the 3-column composition is broken and the text is often fitted in 1 or 1.5 column. They also break that pattern by showcasing quick 3-step recipes by writing the steps next to the respective image and design the full-spread just covering the short recipe. Along with this they even have filler pages where they use a combination of a visual and a quote or a sentence, in no specific grid or format, they try to keep it different in every issue. 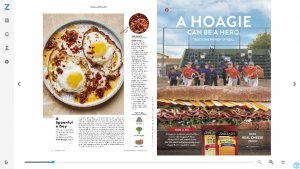 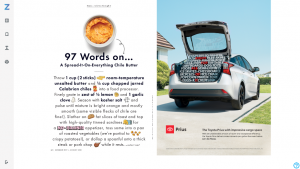 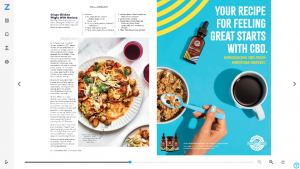 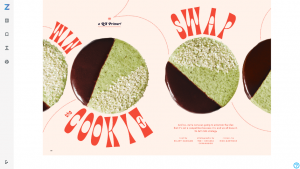 The transition from one section to another is done cleverly, each section visually different. The textual content is well-distributed throughout the magazine. As showcased in the sample images, mostly one side of the magazine is an entire spread so thus the page adjoining it is usually a small 5-7 step recipe and just text with a photo of the recipe covering ¾ of the spread. In this manner, the spread is a fair balance between food-images, food recipes(description) and there is a clean overlap of the text and the image.

The gutter is more than margins, it is 1” I think, the white space forms a frame on pages where the recipes and the food image is there.

However, there are times when the format is not maintained, and the image sizes are not the same that makes the spread composition look weird sometimes. It seems intentional to break the pattern and use the font and images that are different from each other, but sometimes I feel they do not compliment each other, and it seems unnecessary.  There is also a change in the orientation to break the pattern. Here is are some examples showing that: 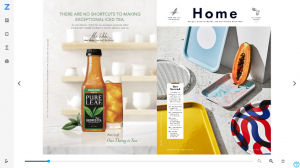 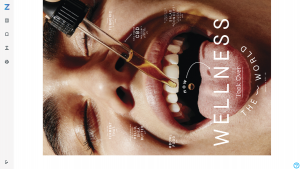 In conclusion, I would like to mention that the overall composition of each layout is kept simple, straightforward and minimal which doesn’t make the magazine too overwhelming for the reader. They make efficient use of the space while composing each spread in the magazine, making each issue so different from one another. The visuals are not just photographs but also comprise of creative and provocative illustrations. I think these visual and their position on each spread is core to the entire layout of the magazine, unifying the entire issue. The visual also are placed carefully, respecting the white space and showcasing refreshing, artful visual composition.