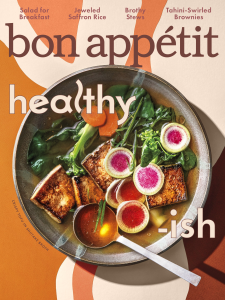 This is the cover for the February 2018 magazine. The covers typically have one large photo and few words.

Condé Nast’s Bon Appétit is a food lifestyle magazine printed monthly, except for their December-January issue. This January, they reprinted January 2017’s popular roast issue. It appears the number of pages varies from roughly 120 to 140. The book is a normal letter page size, 8 ½” x 11”. I think this is a successful design strategy because this size is familiar size feels comfortable in the readers’ hands. Although it is a printed magazine, subscribers can also view a digital version on an iPad, Kindle, or with Google Play. It is a smart decision to at least give readers the choice to view the magazine digitally or in print. Bon Appétit‘s website reflects their brand as well, with the same colors and typography that can be found in the print magazine. 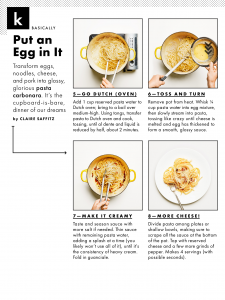 This is an example of a page with three columns.

The number of columns changes with each flip of a page, however, the most common number of columns are three and six. The margins vary page-by-page. Some pages with large images are full bleed. The top margin falls some in between 3/8″ to 5/16″ and the bottom margins tend to be larger at 1/2″.The side margins range from 1/4″ to 1/2″ typically. Since the number of columns vary, this also affects the size of the inner margins, which can vary from 5/16″ to 1/2″. Although each page tends to be different from the one before it in terms of margins, it works because it helps retain the reader’s interest so they don’t get bored of the same repeated setup.

Bon Appétit does not leave much white space, but they do so in a way that is not overwhelming.  Some pages are very text heavy. Typically, there is one story on a page. Some pages are just one full photo and other pages include several photos. They frequently place text around an image’s shape. 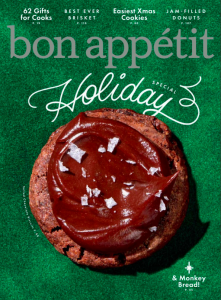 This December-January 2017 cover shows the text following the shape of the cookie. 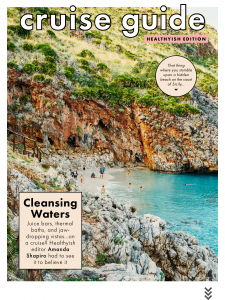 This page shows Bon Appétit’s style of one large, colorful image encompassing the entire page. Although difficult to see because of the white on white backgrounds, the bottom margin is larger than the sides and top.