Fonts In Use examined the September 2017 issue and claimed the magazine used Futura. However, that issue stepped outside of the magazine’s typical typographic style, using Futura in interesting ways like depicting upside down E’s as W’s. 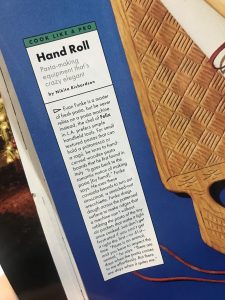 Futura is a font family that Bon App uses frequently. They use it for headlines, body text, and cutlines. Although it appears most of their text is in this font family, it works because they use different weights, styles, colors, and sizes. The body copy is usually thinner whereas headlines, names, and other important words are heavier to show hierarchy and prominence. I found the different styles of decks interesting. Most often decks are larger than the body copy but sometimes, if the body copy is directly underneath the deck, the deck is thinner than the rest. Some sections are consistently in a serif typeface, like the editor’s letter. In the December 2017/January 2018 issue, there is a story that’s body copy is in a serif typeface. I’m unsure why that is. Their name plate is also in a serif typeface, but it is all lowercase so it still feels less intimidating. They also play with the tracking, increasing it more section headers. 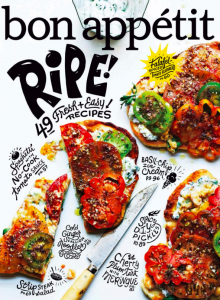 Occasionally, Bon App will feature more “fun” fonts for headlines or important words over photos for emphasis. For example, “holiday” on the December 2017/January 2018 cover or the “all day every day” headline in the February 2018 issue.

It’s hard to pinpoint exactly when but Bon Appétit underwent a slight redesign. The basic layout remained the same but the typography changed somewhere in between 2016 and 2017. In the past, they used a chunky playful serif font for section headers and headlines. I think it was smart decision to move to a cleaner font because the old font was hard to read.

The sans serif Futura typeface feels playful, which is important for the Bon App brand. Their brand is fun and youthful because they don’t want readers to feel like these glamorous, fine-dining meals are too difficult for a beginner cook. It’s impressive that a typeface and overall magazine appearance can do that.

Overall, Bon Appétit uses a mixture of straight forward yet ironic and funny language. They are successful at being conversational.

The exact translation of “bon appétit,” from French to English, is good appetite or if it is said to someone, it means enjoy your meal. This phrase is friendly and inviting, which represents Bon Appétit’s playful yet mature brand.

Headlines are usually two to five words in length, with some occasional longer headlines. They are usually conversational, punny, questions, or statement. Even recipes get a fun headline, like “Awesome Sauce” for a caramel sauce recipe. There is almost always a deck, with no hammer headlines or subheads.

Bon App only uses pull quotes every once in a while. They are attributed.

Bon App utilizes cutlines and captions more so than pull quotes. They are a big fan of using arrows to point at which image specifically they are referring to. They are usually short and fit into the brand by being punny and conversational. For example, “The Grill’s Warren Hode pours a Boulevardier. And, yes, we’ll have another.” 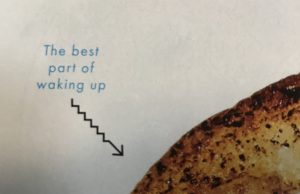 Story promos are only on the TOC and not on department fronts. They are conversational.

Bon App has four recurring departments: Starters, BA Kitchen, Columns, and Features. Starters is fitting for a food magazine because it’s at the front of the book. BA Kitchen is short for Bon Appétit Kitchen, which is unique to this magazine. It’s also a play-off of the word badass, which is probably the edgiest this magazine gets but it’s still funny, which fits their brand. Within the departments are some reoccurring sections, like Dinner Tonight, Basically, Kid Approved, Healthyish, City Guide, Prep School, Last Bite, R.S.V.P., Notes From My Test Kitchen, and more. Each issue will feature at least a few of those sections with some stories that wouldn’t fall into any reoccurring section. While most of these section names are self-explicit, they are still clever.