The typeface Lust is a cursive typeface with serifs. It suggests elegance, but with a modern flair. It’s not a stuffy type of cursive typeface; it’s fresher and more fun. Gotham is a clean, sans serif typeface that’s rounder and a bit wider than your traditional Helvetica or Arial. It says ‘I’m sophisticated and fresh.’ 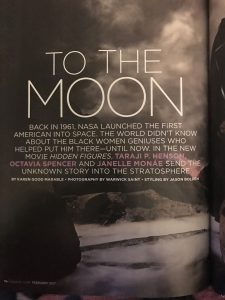 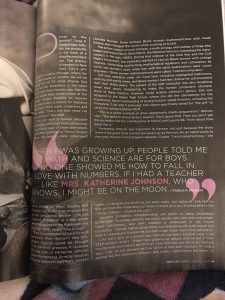 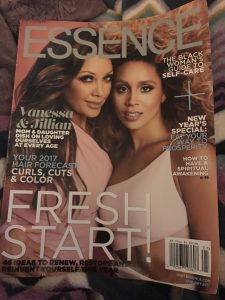 ESSENCE conveys a tone of the intimate, conversational black “girlfriend.” Their slogan is “fierce, fun and fabulous,” which I think translates in to the language. The language is sassy, fun and down-to-earth.

Headlines are usually short and usually play off something that the story is about. For the cover stories, the headlines usually play off something about the cover star, or what they’re doing, such as starring in a new movie. The decks are usually around one to two sentences for shorter stories, and three for long features. Decks are usually more straightforward when summarizing more about the story. The headline is really where the playful language comes in. Pull quotes are never attributed, unless more than one person is being interviewed. They are usually the quotes that stand out from what the interviewee said, and they usually are insightful or attitude driven.

Bylines and credit lines are straightforward and just state who the story is written by, pictures styled by, and who the photos are by. Department names are usually straightforward: beauty, health, etc.