Cover: For this post, I decided to analysis and diagnosis three different Condé Nast Traveler magazines. The December 2016, the January 2017, and the February issues are three that I selected. On the December issues, it features an image of a hidden like relaxation shot with two chairs pointed towards a sea. The reason that I say it’s a secret spot it is because the caption below the chairs says, “Your Greek Island Hideaway. The purpose of this cover is to pull people in making them wish that they were sitting in those chairs in that hidden spot. On the front of the January 2017 issue, there is an image of a place in the tropics. Just like the on the December 2016, it features a place where people can go to and get lost in the beauty of the island. Then on 2017 February issue, it features a picture of a boat in motion. This issue is not like the last two issues because it doesn’t feature a picture of a hideaway. All three magazine, just like other travel magazines, serves the purpose of trying to draw readers in the read about these beautiful places featured on the front cover of the issue. 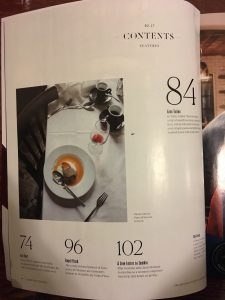 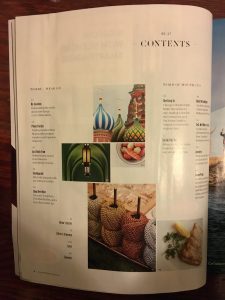 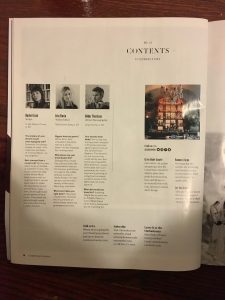 TOC/Index: The table of contents for the February 2017 issue of Condé Nast Traveler goes on for three pages. On the first page is feature the content for the big features stories on the issues. On the second page of the table of contents are the front of the book stories, and then on the last page it features all of the contributors. The use of hierarchy is displayed really well in the first image because the main feature story is at the top left of the contents page. Not only is it higher up, but the page number is bigger than the rest of the other feature story’s page number. 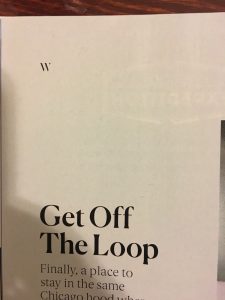 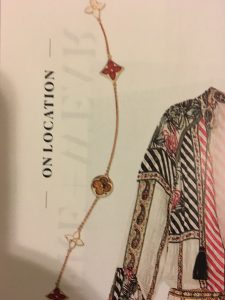 Departments/Sections: The February 2017 issue has two different sections separated by images that feature in the top left corner. In the top left of corner of the WHERE + WEAR section, it features text rather than words as a way to show us the section we’re in. When it comes to the WORD OF MOUTH, there is a W that helps us to understand what section we are in. I really like the layout of the image, which is within the WHERE + WEAR section of the book. The layout of the page is well-balanced on both sides of the page. 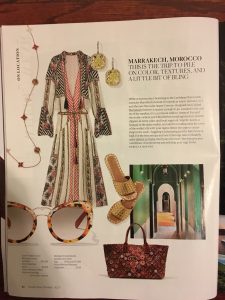 My real name is Alan Taylor Jr., but I go by the name Alan Junior. I was born in raised in the City of Rochester. I am currently in enrolled in graduate school at S.I. Newhouse School of Public Communications at Syracuse University. My major is Magazine, Newspaper and Online Journalism. I have a strong passion for graphic design, photography, videography, traveling, filming, and storytelling. One question that's asked by everyone is, is there a story behind the number 10? The story behind the number 10 is... When most people see my name for the first time, they don't realize that the "X" represents the number 10.