CN Traveler is a very interesting space in which to discuss the use of imagery, because it is very heavy on high-level photography. Images range from highly curated and saturated to being naturally poised for print. Each magazine has a different brand, and the photographs inside seem to match that branding for the most part. However, there exist many similarities as well.

Almost no images have people in them, and are long shots rather than close-ups. Most pictures are long shots of buildings in which the focal point is centered. Sometimes, the pictures are of tropical locations. I notice that here, they are all taken as aerial shots. Either way, all photos are taken from a distance. Surprisingly enough for a travel magazine, not a lot of shots are taken indoors. Perhaps they know they are catering to an adventurous audience that likes to get out and be active outside their hotel room. When shots are taken of hotels, they are taken of the exterior. This may be a balcony or an outdoor bar, for example. I did find one picture taken inside a hotel room, but it is clear that it is a large tent of sorts. Instead of a door, there is an opening that goes directly to a patio outside. The picture is attached to show exactly what I am talking about here. Another photo shows a hotel room in Park City. Here, the majority of the photo space here is taken up by the large window that overlooks the view of mountains and trees.

Photos are highly saturated in their colors, but stick to a pretty neutral color palette. I do not mean by this that all colors used in photographs are neutral, but that if one photo has a lot of color in it, they will not add much more color to that page. For example, the photo taken inside of the large tent has a lot of bright red hues, but they focus on that red in a way that makes it look natural and clean rather than too busy. Other than that, there is a lot of empty space in photos. The focal point of a picture will be centered and right in the middle of the picture, but there will be a lot of empty space around it. For example, there is a photo of a suitcase. The suitcase is white, the surface it is on is white, and so is a bottle of perfume next to it. There is a pale pink dress laid atop the suitcase that acts as the focal point of the photograph. Another photograph hosts a woman in an all-white bedroom. I notice that whenever there is someone photographed, it is almost always a woman, and you almost never see her face. This is very interesting to me. Perhaps they are trying to give off a feeling of being distant, far away, and luxurious rather than friendly and personable. All photos are are actual live photographs rather than graphics or illustrations. Again, I feel this is more upscale and luxurious, as that is the audience CN Traveler is looking to target. Photographs are extremely frequent, and almost all of the time take up more room than words on each page. This is either because one single picture takes up almost an entire page, or three photos will be collaged symmetrically together in order to create a clean look to the page.

All images are either vertical or horizontal rectangles. The only time I see images that are square-shaped are when a guest writer or photographer is hosted for an article. Sometimes an issue of the magazine will be a guest contributor. In this case, they will have a square photograph of them in black and white. They seem to place a lot of emphasis on the people behind the stories to make them want to stand out so much stylistically. No photos are cropped into circles or silhouetted. Again, I feel this is a purposeful move as a part of their branding. They want to keep things clean and rectangular. 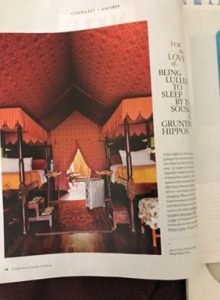 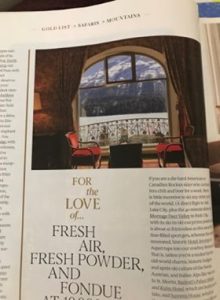