Much like other magazines, Cooking Light uses their cover as a space to not only highlight the theme of the entire issue, as well as to bring attention to the feature articles, but also as a space to display their spectacular food photography. Our experience with food relies very heavily on our senses, and with smell and taste removed due to the nature of print, sight become 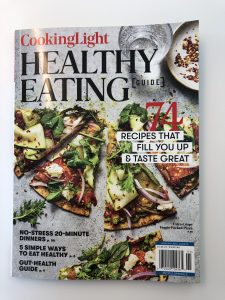 s extremely important in enticing readers. While the cover image is always from one of the featured recipes, the styling of each photo varies to cater to the theme of the issue. It is important to note that the creative director is very thoughtful about her photo direction, making sure to selectively place the food items within the photo in a way that still leaves space for the image and text to interact. The nameplate typically appears half of an inch in from either side and three-fourths of an inch from the top, most often in a coral red color, but occasionally in gold. With that said, Cooking Light also puts out special edition issues, which utilizes the nameplate in various locations and sizes in relation to the issue’s theme and cover contents (as shown to the right). The folio was removed during the rebrand, but most regular issues have the tagline “What Healthy Means Now” directly above the nameplate. Regular issues display their coverlines in one of two main predesigned formats. They either display four inside stories, equal in the type hierarchy, directly below the nameplate, or a varying number of articles left aligned located beneath the issue’s theme. Special editions still include cover line, but they tend to be fewer in number and smaller in size in comparison to the typical issues. The overall type hierarchy is very clear due to the simplicity of Cooking Light’s covers. On their average cover, the nameplate is the largest text on the page, but not the highest text. That position is actually filled by the tagline, but since it is also the smallest text on the page, it easily gets over looked and becomes the least important text on the page. The coverlines are always beneath the nameplate, falling third in importance and size in relation to the remaining text. Lastly, the issue’s theme, the second most important type on the page, is either centered or located in the top left corner under the nameplate. Each regular issue consistently uses one of the two predesigned formats regarding type hierarchy, location, and color, but the order and number in which they are used does not suggest any specific pattern as to why. Overall, Cooking Light’s cover suggests a modern and clean approach to home cooking, which goes hand in hand with their revitalized mission to redefine healthy eating patterns. 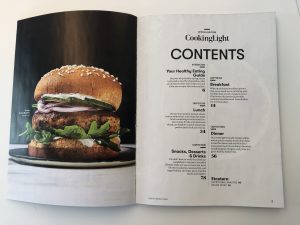 Cooking Light’s contents section takes up a full spread, with an image highlighting one of the issue’s recipes on one page and the full contents section on the other. The type is hierarchically placed, with everything centered on the page and separated by a central dividing line. Each section sits below the one above it, but on alternating sides of the center dividing line. The alternating chapters allow for a clean use of white space while still making the written content easy to follow and understand. There are no promos in this section of the magazine. 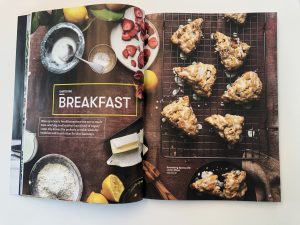 With over a 100 original recipes in each issue, the sections are divided by kind of meal, consisting of an introduction into the issue’s theme, Breakfast, Lunch, Dinner, Snacks, Deserts & Drinks, and Etcetera, which covers the nutritional analysis and recipe index. The sections always appear in the same order, as listed above, with the introduction always only taking up a couple spreads, and the rest of the magazine being split between the remaining sections. Each section has an opening spread devoted to introducing the topic to the reader. Aside from the introduction spread, Cooking Light uses headers to help each reader establish where they are in the magazine.