An American food and lifestyle magazine, Cooking Light has been a staple in American kitchens since its establishment in 1987. Owned by Meredith Corporation, the magazine has recently undertaken a complete redesign, receiving a gold medal for Best in Genre in Women’s Interest from the Society of Publication Design. 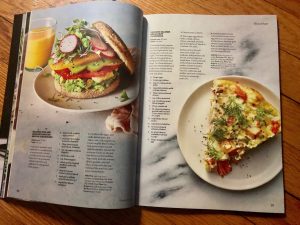 Cooking Light is a monthly, 8 x 11.75 in. magazine averaging 96 pages per issue. Aimed at the middle-class foodie looking to expand their cooking repertoire, the magazine effectively uses its size to display the gorgeous, drool-worthy photography it produces for each recipe. Composed of almost entirely recipes, the choice to print monthly leaves enough time for authors to effectively reflect the changing trends of the food industry as well as for readers to actually try the recipes in each issue. Additionally, Cooking Light’s size and page count makes it perfect for transporting from place to place 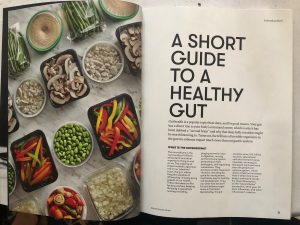 After the rebrand, Cooking Light established a revitalized grid system that not only allows them to use the page space in a more effective manner, but also creates a more consistent visual style throughout the entire magazine. Its margins measure .625 of an inch from the bottom, an inch from the top, and .5 of an inch on either side. Their use of columns is interesting because it varies throughout the magazine. Sometimes there are three distinct text columns measuring 2.5 inches, with a .25 inch gutter. Other times there are three columns horizontally centered measuring out to be 1.5 inches with a .125 inch gutter. More often than not though, there are four columns (or less) measuring out to be 1.5 inches with a .125 inch gutter. It is apparent Cooking Light uses at least a four-column grid, but I would assume based on their flexibility in text and image positioning that it is actually an 8 or even 12 column grid. 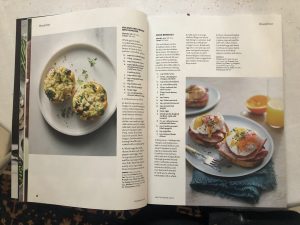 Broken down into 6 main categories, Cooking Light averages 1 recipe per page. This remains extremely consistent throughout their issues except for stories that lend themselves to additional information. In those special cases, the story would typically take up an entire spread. Overall, the categories are broken down into the introduction, which highlights the theme of the issue; breakfast; lunch; dinner; snacks, desserts & drinks; and etcetera, which goes through the nutritional analysis and recipe index. Photo count averages one per page rather consistently, with very few circumstances in which it deviates. Overall, Cooking Light’s grid allows for a beautiful amount of white space that catches readers attention while simultaneously not producing an overwhelming amount of content. The result is an extremely clean and crisp design that allows the focus to be placed on the food itself, which is truly the calling card of the magazine.