Dagens Nyheter uses serif and sans serif typefaces (it looks like one of each). I couldn’t find the name of the typeface they use for their nameplate and section titles, but it reminds me of something like Bodoni or Didot. It’s bold and has lots of contrast between thin and think lines. It’s in all caps, and I think it does a great job of making a strong, bold statement and catching the eye of potential readers.

For their headlines and display type, they alternate between a serif (I can’t tell if it’s the same one as the nameplate – I’m thinking it’s not) and a sans serif typeface. The sans serif typeface is called FF Dagny. It is a custom typeface created specifically for Dagens Nyheter, and evolved from their original custom typeface, DN Grotesk (also custom) when they redesigned the newspaper several years ago.

Use of FF Dagny

The serif typeface is used for most larger headlines, and FF Dagny is used for captions, deks, statistics, and sometimes the first few words of a story (I’m not sure if there’s a technical term for that). They play a lot with variations in weight to create contrast and keep the reader interested. I think this practice is pretty daring, and is proof that typeface choice can say a lot about the publication’s message. I think it has a young, bold and fresh feeling. Their use of sans serif drop caps – sometimes very narrow, and other times very thick – even gives it a magazine-like feel. 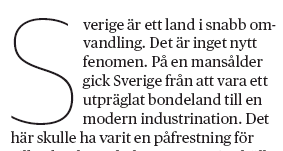 Using variations in typefaces for headlines facilitates organization and lets readers know where different stories begin. I’ve noticed that the NY Times takes a similar approach, alternating typefaces to create contrast and organization between all of the stories on their front pages.

Lots of Variety, but still cohesive

I couldn’t find any information about what they use for the body copy, but it’s a serif typeface. It’s easy to read, and I think it works really well in contrast with the serif typeface.

I really love Dagens Nyheter’s typeface choices. I think they maintain a sense of classic professionalism that every newspaper should have, but they also have a “fresh” feel that could appeal to all audiences, including younger readers. While I was writing this, I kept thinking of the contrast between Dagens Nyheter and The New York Times, which is where I typically go for my news. If I could read Swedish, I would definitely read Dagens Nyheter instead. To put it simply, it’s just more fun. Design/visual appeal is what readers see first, even before their brains register what the headline says. While the NY Times has lots of good information and does vary their typefaces, I think it looks a bit old fashioned. Maybe this is the look they’re going for. But I think they could learn something from Dagens Nyheter. 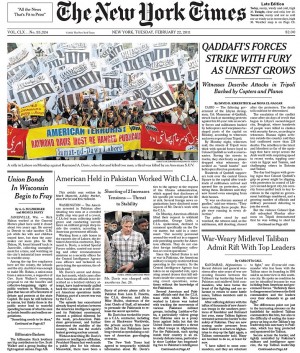 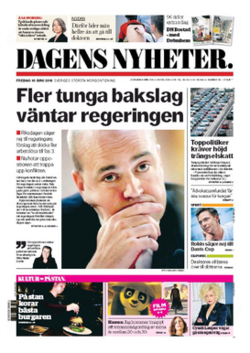