Analyzing Dagens Nyheter’s website (http://www.dn.se) was a bit daunting at first, considering it’s not in English, and I had no idea what any of it meant. But that meant that I had to rely on the design of the page to guide me (which I guess is a good thing for this assignment!). Certain aspects of the paper’s online version reminds me of the printed version – which makes me happy, because I think the print design is beautiful. It’s clear that they have a strong identity for themselves, and they know how to stick to it. It looks like they use the same typefaces as the printed version does for the display type. But they use a different one – a sans serif (looks like it could be Arial) – for the body copy, and it’s pretty large. The colors used on the website are very similar to the printed version, as well – lots of black offset by bright red, used to divide stories and differentiate between sections. 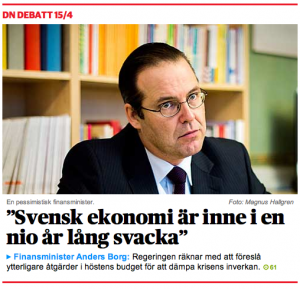 The images used on the website are somewhat similar to the actual paper, but with less space available to run photos, they’re not quite as interesting. I love how Dagens Nyheter will often use up about ¾ of the space on their front page for a really nice photo – an effect that can’t really be replicated on a website. But there are still some nice photos, just a lot smaller, and a lot more square headshots. 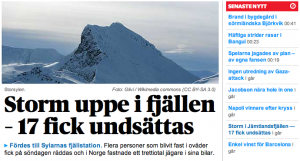 The site also has some videos. I watched a few of them, even though I didn’t understand everything that was going on. From what I was able to interpret, I think one was about a female pilot describing her life, and the other was about kids solving Rubik’s cubes (this second one only had music and video, no voiceover or interview.) The video about the pilot was mixture of images and pictures with voiceover of subject talking; relatively basic, but well done. I’m not sure how either was relevant to current events, but they were a nice addition, even if it was only a fun little feature.

There are two navigation bars at the top of the page. I have to admit that I’m still a little confused by this, but it seems like the lower navigation bar has links that got to outside sources, like weather, stock information, job search info, etc. So I guess this is sort of like the digital version of our classified ads section, or something of the sort. Maybe I’m just naïve. The top navigation bar is pretty self-explanatory, though, with the typical links to different sections (Economy, Sports, World News, etc.)

It’s a little hard for me to say whether or not the types of content on the website is different from that of the printed paper, but I’m going to guess that it’s pretty similar…? At least judging by the pictures, and the fact that the visuals are pretty consistent across both platforms. I took a look at print version on Press Display, and I did find some stories that looked like they were the same thing. If I were to infer any sort of difference, though, I might guess that the website has a little more “fluff” than the paper. I wouldn’t expect to see a story about a Rubik’s cube competition in print, for example. But I probably can’t say for sure.

All that being said, however, one thing I REALLY dislike about Dagens Nyheter’s website is their grid/layout. I know that newspapers’ websites aren’t always the most attractive sites out there, just because they have so much content to manage. But I really don’t think that Dagens Nyheter’s layout makes sense. There seem to be three columns going on – a wide on the left, narrow one in the center, and medium one on the right. Everything seems very squished and crowded to me, and I’m not sure why they decided to arrange it like this. There are also a lot of ads interspersed all over the place, but I guess they might not have total control over this. And furthermore, the site is SO long! You scroll and scroll forever, and it just feels so unnatural and monotonous. Maybe this is the way they do it in Sweden…I don’t know. 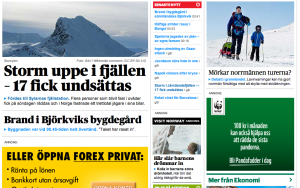