For the most part, word use in El Universal affects the overall page design in a very strong way. That said, the news section (again, as I seem to continue to say) is the least innovative when using words. Almost all of the headlines are summary headlines with an even more explanatory dek. 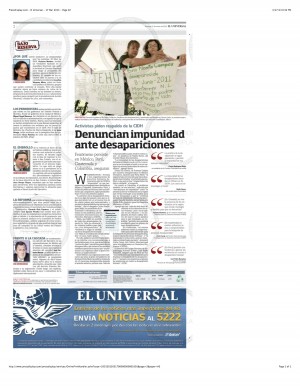 Cutlines are about two lines long and explain the photo they accompany when the photo is used in or next to the main story. When the photo is treated like a feature photo and teases to the story on a different page, the cutline is much longer, and also takes a mini headline. Look at the uppermost photo of chefs on the page below for an example of a longer cutline, and the photo below and to the left of that one for a more standard cutline. 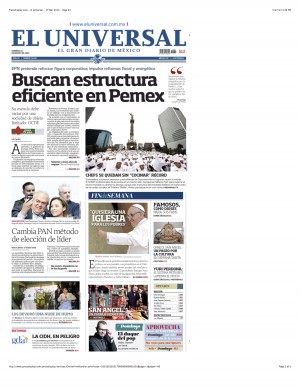 Bylines are the name of the writer and the email address, which is appropriate because it’s very easy for a reader to know how to get in touch with the writer if he or she has any questions about the article. I find it a little strange that a position is missing from the byline. I like to know what editor position the writer holds if he or she holds an editor position, or I like to know whether he or she is a staff writer or a contributing writer. Maybe it’s not necessary for the story itself, but it’s something I look for when I read papers. Promos and teases are also pretty newsy, and less conversational.

Other sections of the paper do almost everything mentioned above very similarly: Headlines are either summary in nature or are hammer headlines with a dek; pullquotes are summary-like in a way, but also more flirtatious than they are in news, because they are meant to draw the reader in more so than explain the story; cutlines are the same, and bylines are the same too — full name and email address.

Something else that other sections seem to do more than news is use stronger words, especially those that are culturally significant. Whereas the news section sticks mostly to summary headlines and word choices, the tone in other sections is more punchy. For example, “Casi como Dios” is a pretty strong headline for a story that has nothing to do with God and religion. The story is about music idols, but in Mexico and many Spanish-speaking countries, God and religion are held in high regard. Also, “La actriz más odiada” is very strong — it translates to “The most hated actress.” That’s pretty straightforward and shameless, if you ask me! It almost has a tabloid-like gossipy ring to it, even though the story is formatted like a standard newspaper article. 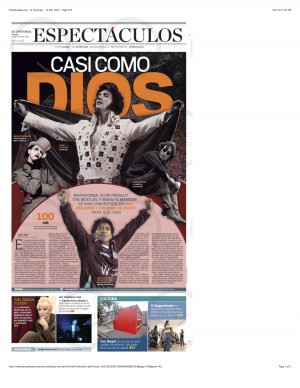 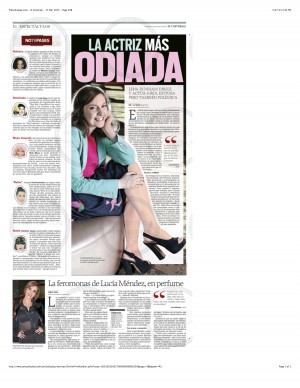