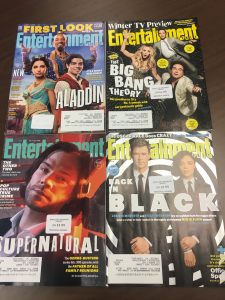 The purpose of the front cover is to catch the eye of the reader. Entertainment Weekly uses bright colors and after looking at the last four issues I noticed that there is always a shade of yellow on the cover. That yellow is only used for specific key words for the issue. For the Supernatural issue the numbers 2 and 4 were yellow signifying that it was the second issue in a collection of 4. For the Back in Black issue the words Men in Black were in yellow. Meanwhile the Big Bang Theory issue had bubbles with words significant to the show.

The covers also had backgrounds that coincided with their movie or tv show. For the Big Bang Theory the background was space, Back in Black there was a hypnosis circle, and for Supernatural there was a dark cover with the light of a fire coming through the pillars of wood.

The nameplate of the magazine stays consistent, but I noticed that for the Aladdin and Big Bang Theory issues that they added symbols in the “e” of the title, to go with the rest of theme. For Aladdin they added Genie’s lamp, and for the Big Bang theory they had the symbol of an atom. 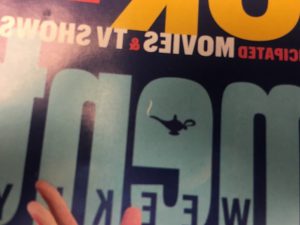 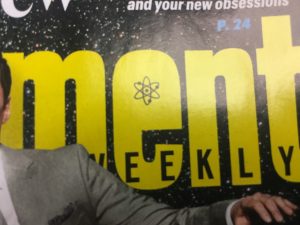 The number of inside stories on the cover usually averaged to three. With the consistency of the cover being the bright color of the nameplate and located in the bottom left corner were the names of the celebrities pictured. Overall the magazine has a bright fun and star-studded tone. 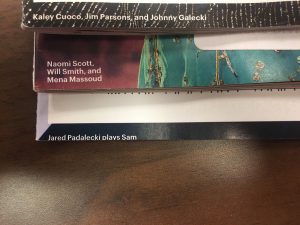 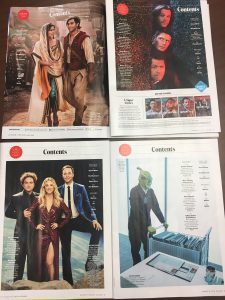 The Table of Contents continues to match the theme of the cover. It is either with the cast from the cover, or it includes other individuals that are apart of the the series or film.The promotions on the page would vary between a television show promo, a Skittles ad or StraightTalk wireless.