TYPOGRAPHY: For Entertainment Weekly it is what makes it stand out, with its bright, and bold font. They use the Scout font for their nameplate. For their Headlines they are usually a mix between Bureau Grot and Century Expanded, fluctuating between both depending on the overall feel of the cover. For the cover lines they do the same staying consistent with these two fonts.

The titles of their articles is where they transition between Ricochet, Chippo and Boxout. Usually in a large font size to attract the reader to the article, while the in their body copy they continue to use Scout. But the body in copy is in different weights for each article; varying from light, and bold, depending on the articles. For Q&A articles the questions are usually in a bold weight, while the answers are in a light weight, to differentiate between the interviewer and celebrity.

The style of the typefaces remains the same throughout the magazine. It uses different varieties of the Scout Font, but for the pull-quotes I saw that they usually stand out alone on the page and it is not nestled into the rest of the text of the article. The pull-quote I saw in an issue is usually right next to a photo of a celebrity. 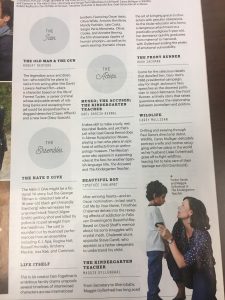 For the guidelines that Entertainment Weekly uses I notices that they follow a pattern for their articles throughout out each article. They bold out the titles of either the show or celebrity they are mentioning before switching to a light-weight font to the actual text inside the magazine.

Entertainment Weekly’s typeface’s suggests that they are a fun, bright, bold magazine. Their typeface reflects their overall tone throughout their issues. Their choice of a sans-serif, gives a definite feel, conveying their enthusiasm for “Entertainment.” For their reader it brings a sort of expectation on what to expect from the magazine, information on what is to come, and a good time reading it. 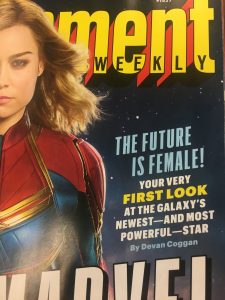 The language of a magazine is the tone, the voice of the issue. It is just as identifiable as the typeface. Just like a everyone is their own person, every magazine is its own. Entertainment Weekly is the fun-loving, up to date, keeps you in touch with pop culture personality in people’s lives. And its content, and design does just that.

The name of the magazine is “Entrainment,” and its tone is exactly that. With bright colors, celebrity photos, and large typography. The headlines are catchy, and few words are uses, and usually relate to the celebrity that is featured. 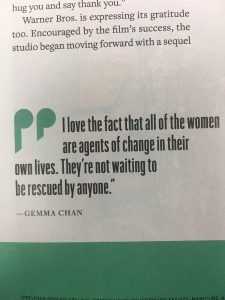 Entertainment uses a lot of pull quotes, and the style mirrors the celebrity being interviewed, and conveys their ideals, and the topic of that issue. For one of the issues the pull quotes are used to inspire women in the industry.

For cutlines of the magazine, they included the name of the celebrity photographed and the movie they were recently in. And for the labels in the magazine they were straightforward, focusing on Movies, TV, Music, and Books. The bylines included the name of the author, and usually their social media handle, but not all authors included it. There are promos throughout the Front of the Book, The       Well and Back of the Book.  I noticed that they usually took up one page. 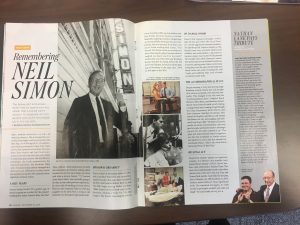 In the sections of the magazine the tone was very straightforward. It focused specifically on being freshness and life to the pages. But I noticed in one issue that sometimes the tone of the magazine changed when addressing an event or remembering a significant figure the Entertainment community. They changed their language to a sentimental and somewhat serious. Somewhat because it was not something that left their readers feeling somber or melancholy, but appreciative of what that particular person or event represents.

Entertainment Weekly’s use of language adds to the overall experience. It’s nameplate reflects its language perfectly, and brings all aspects of the word to its articles. It brings out emotions from the reader, from joy, excitement, appreciation, and anticipation of what is to come.