Function | Purpose
Esquire continues to stand out in newsstands and the like, with the way they feature their cover story. George Lois was the art director for the publication in the 1960s and is known for creating the visual tone that is still influential today. 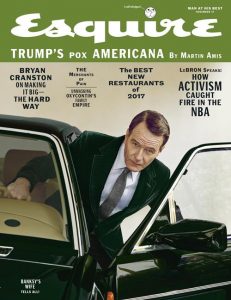 Name Plate | Folio
Their nameplate is approximately 1/7 of the page and extends to .4 inches from the left and right margins of the cover in some issues. Sometimes, the nameplate extends off the cover on both sides. The font looks like Esquivel, having a retro, smooth look that compliments their pages and content. The color of the nameplate varies but has more often been a shade of red, or filled in black. On occasion, the name will be outlined or even appear to be painted to play with the look slightly. 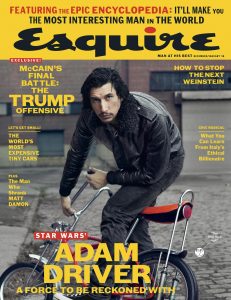 I have noticed that the nameplate varies between being behind the person featured or covers their forehead other times. The layout of the covers does not stick with a certain positioning of the individual and he or she is either photographed full body, waist up, or close-up portrait. Most covers have male celebrities as their main feature but at least once a year, the magazine features a woman. Also, having two individuals featured isn’t as common but has been done and the issues below were all designed for 2016 issues. 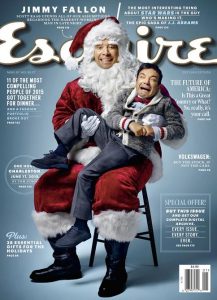 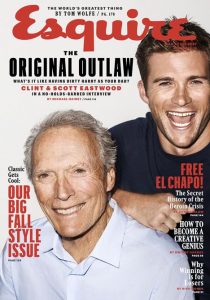 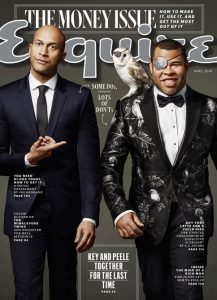 Consistency
On some covers, the inside stories are listed on the left and ride side of the subject. The fonts vary and often the designers use all-caps with some stories and use lower and upper case letters for one or two stories. In some issues, the author is listed in smaller font below each story and in others, only the page number is listed.

Hierarchy
The stories listed vary in size with changes in some being in all-caps or slightly larger than others, but there is not a drastic difference overall. Each promo catches the reader’s eye whether because all are bold or with the colors varying. On the Winter issue cover, the story titles are either in black or white. In others, there will be mostly black with highlights being in red, and another color used as the subtitle or additional story above the nameplate.

Above the nameplate, there has been a subtitle such as “The Fun Issue” or “The Next Big Thing” with additional subtitles written much smaller beside it in a list, including “in cars, in politics, in music…” or another in the December 2016 issue had “Buy this magazine or we’ll crush your damn phone!” written in all-caps (Figure 1). 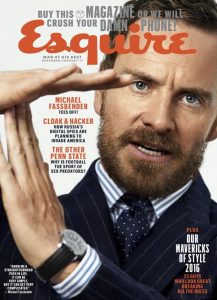 On most covers I researched, there are five to six teasers. A few issues have more teasers that are less descriptive than other stories featured but are witty and direct the reader to that piece even if the page number is not included. Some issues have a more descriptive cover with run on sentences, multiple captions, and with the story titles and teasers creating a type of collage (Figure 2). Each issue stands out from past covers and between font, layout of stories, and even the placement of the nameplate, prevents duplicate looks as well as, keeping with the personality and creative features in each issue. 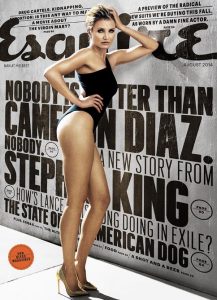 Tone | Attitude
The designers do not stick with one framework for the covers. Although most covers have some humor included or vary with the mood the person portrays, the font of the stories listed and the designs around them also keep in step with Esquire’s stylish, professional, yet playful and innovative look and personality. 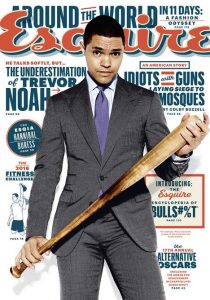 *In the March 2016 issue, the stories are supported and highlighted by graphics, from being boxed in with a bold frame, to encircled and colored in blue, to an illustration and other designs that make the titles pop (Figure 3).

In the Big Bite section, there is usually a review of a television show or movie, travel, a designer or music. December/January issue, there is a review of the film, The Master, featuring Daniel Day-Lewis, then a short piece on traveling to Dubai and it’s hip dining scene. Following that, the next page features a design firm lead by husband and wife, then the next piece is about music, and a cartoon fills the page after. The average number of pieces in this section are four. 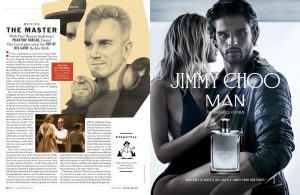 Then there is a label, politics, in the Big Bite about the history of the bomb. I thought this section would end here but there is another piece about a movie, where the writer discusses Spielberg’s newest release, The Post. I found it interesting that they had two films mentioned and that they were first and last but it prevents them from being blocked together. 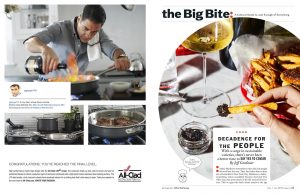 The Code follows, which covers style to office space and then some more style, even discussing the style pieces found in the film, Deer Hunter, to consider, informing readers of what to wear in the outdoors and even stand out in the big city. This section also includes a page on watches but not just stylish items. I have found there are more style features here due to the pieces being slightly shorter than in the Big Bite or ESQ-IQ sections. In the Winter issue, there are eight stories in The Code. 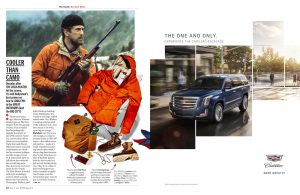 They are a dozen watches that have history tied to them. Then the section “How I Got My Style” follows, which features a designer or business owner who shares their inspiration and tips. More style about being fitted for a suit and where to shop now grace the pages. 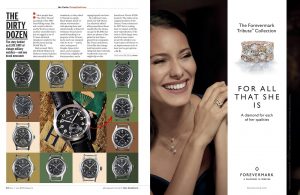 FEATURES
ESQ-IQ is considered a feature section and offers unconventional wisdom to a piece called, “Money Talks” and “Original Thinkers” that follows. These titles change in the issues but offer advice and tips. These mini-features follow The Code and usually lead into a larger features, such as “The Best New Restaurants in America.” With these stories being longer and leading into the features of the magazine, they are longer than pieces in the FOB and there are usually three stories found here. 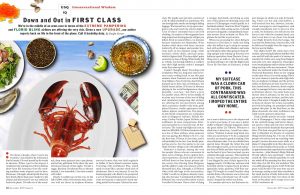 The index is part of the section called, “In This Way,” and sets up the reader for what lies ahead. There are special write-ups and a summary of a topic that is highlighted and broken down. There are illustrations, photos, and graphics filled within this part to add color and bring examples to the content.

The first page of Contents has the break down of an issue or topic and offers a guide to the smaller features. The next page has Esquipedia which goes deeper on a topic or issue discussed somewhere in that magazine issue. The contents on that page show the main features which average at eight stories. 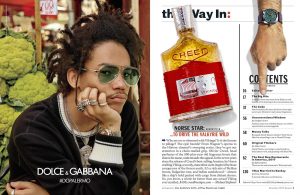 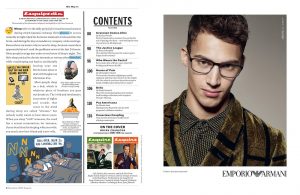 The Letter to the Editor finishes this section and leads into the Big Bite. All transitions are seamless and organized to keep the reader flipping or scanning.