Esquire magazine is a men’s lifestyle publication that runs monthly and measures at 8 3/8 x 10 7/8. This magazine uses the motto, “Man At His Best,” and is for the well-connected man. It not only informs men on culture, current affairs, style, food & spirits, as well as offering features, but it also offers pages of fresh and bold uses of typography and design. The magazine was founded in 1933 and is now led by Jay Fielden who became editor-in-chief in June 2016. The page count is 96 pages, which is lower compared to some high end publications which can range from 128 to 160, with Vogue being even longer. In my opinion, this works since this magazine has focused on being trim and not bulky, but not lacking in content. The cultured man can go to the magazine when he has time, to read a shorter story, glance over the style or food sections, or read the longer features, with no design elements being skipped in organizing the content to fit the sleek publication.

The March 2017 issue featured James Cordon and represented a full redesign, introducing a larger but trim size and a new logo. The magazine is distributed monthly and sometimes has special issues, such as the Winter issue which is the current one on stands now. I will look at past issues to compare in the future but with the last two issues, I have seen a more seen a more retro look with the covers as well as with some of the layouts, including bold typography for titles, captions, and even side bars in special sections. 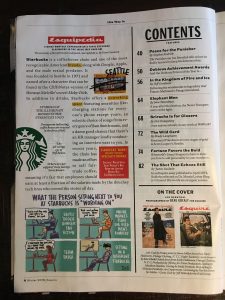 The contents page, includes the Esquipedia (a brief monthly expansion on a topic explored elsewhere in the issue), and has two columns, with captions, a few icons, and a cartoon, which captures the reader’s eye even before you get to the Front of Book. 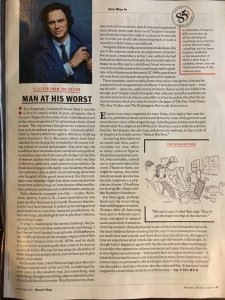 The lines framing the content within each page provides a consistent look and makes the overall look sharp. “A Letter From the Editor” has the Fielden’s photo at the top left corner of the page has the .5 inch margin on the left but the top of the photo bleeds to the top of the page.

There are two columns like the contents page but there is no space wasted. A caption is partially framed with red lines and a cartoon is also partially framed, preventing any cramping between the picture and text, as well as not making too many stark boxes which could make things seem more separate or too blocky.

The FOB has sections, “the Big Bite,” “the Code,” and ESQ IQ which covers 23 pages. The pages in the first two of those sections, average one to two columns with usually one caption, photos ranging in sizes, with one large photo and a smaller one paired with it, and multiple photos on the opposite page, closer to each other in size. For the section on drinks in the Big Bite, there is an up-close photo of drinks that takes up most of the page, besides 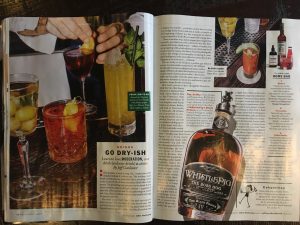 the gutter and the margin on the right. At first this photo seemed to large to me, compared with how they pair photos and captions usually. I understand them using a larger photo but I would scale back some or angle the shot differently. From what I’ve seen, they usually have sharper looking photos and I felt this one was distracting, not appealing with the layout of the two pages.

Side bars are common in this section, as well as photos cut out in various shapes such as the photo of drinks to the left that have a ledge touching the tall bottle in the set to the right of it. Also, they’ll magnify a photo and include shadows such as the bottle of whiskey tipping off the page slightly.

For “the Code” section, one page may vary from a photo covering the entire page bleeding out each margin with two narrow columns in one corner to a fully spread on the next two pages, with three columns and a collage of photos and captions. Esquire often uses arrows or symbols to add to the design of the page. They offer clever captions or humorous advice. Some drawings or the smiley face known for Esquire pops up through out the magazine with a quote. 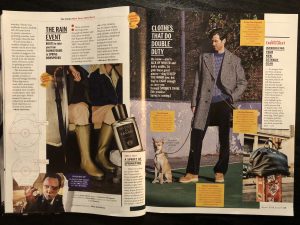 With layouts, there will be one column with larger photos, an outlined box with an additional fact and photo on one page, then more photos and possibly two to three columns on the opposite side. From cut outs of individuals grouped together with the smiley face icon nearby, to a full shot of a man in a suit with a additional photos filling space above and below columns as example of the trend or item demanding attention.

In the section, ESQ IQ, the stories are in three columns, measuring 2.37 inches wide. From what I’ve found, one enlarged photo or cartoon, a pull quote, and another cartoon or illustration fill the space of the spread. Esquire still uses bold or thin lines to frame sections partially, small graphics to outline a pull quote and bright colors or a graphic, such as a circle almost acting as a spotlight on Ashley Judd below, to add dimension to the page. 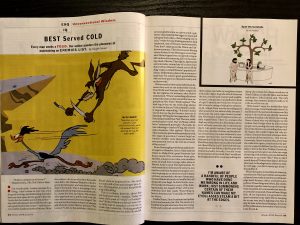 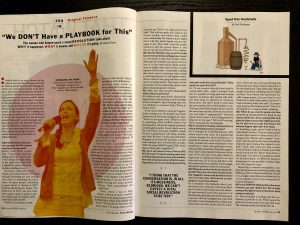 The Watchlist and similar sections in this section, offer lists, photos, varying in placement, some as cut outs, others with varying lighting or edited with a filter. The columns vary and are separated by photos, side bars or simple lines. There are also opinion sections with an illustration of the contributor. 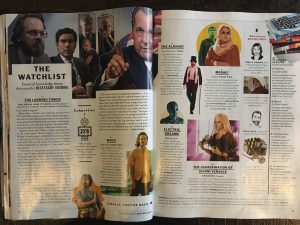 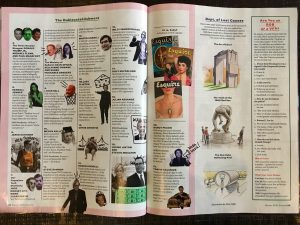 The opening layout has one page with the intro, bold typography, and graphics such as an arrow to lead to the next page or details of the outfit. The opposite page is a photo that bleeds out to every margin. There are five full page photos of actor, Jon Bernthal, and on one, the photo takes up the full two page spread but the three white columns are right above the landscape, which is enough contrast against the pale grey sky behind the structured columns, varying in length, almost looking like stairs as the third column is longer. On the next two pages, the photo again bleeds over to the next page, preventing the right side with the text to look to dull. The designers have also used red circles that look colored in, as well as the red arrows to give a pop of color. It’s a simple addition but I think it adds some variety to the page without being distracting. The photos and graphics on the features seem to be less loaded than the sections in the FOB. The last two pages of this feature, has one smaller photo with a caption in the upper right corner, above the three columns of text. There is another photo of the actor, Bernthal, full size, that bleeds to the edges of the page and a pull quote, with style details below it. 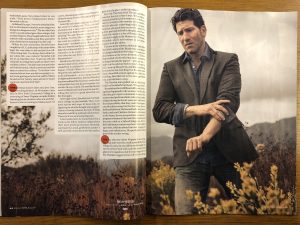 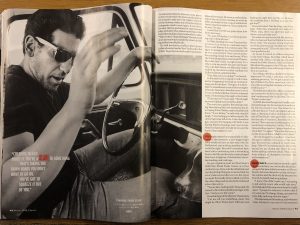 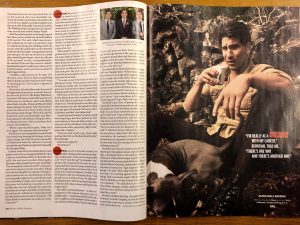 It seems Esquire plays with the design, spacing, and placing photos, illustrations, and witty phrases or pullquotes in the FOB and pages leading up to the  main feature (cover story) then uses the bold colors and illustrations to make the following stories make a statement as well.

In the feature about chef, Francis Mallmann, There is a full page photo on each page of the opening spread, both bleeding to the end of every margin and gutter of the page. There is one photo on the next page, with a two photo spread on the opposite page, bleeding to the edges of the page. In this story, however, there are two columns on the first page of text, on measuring 2.37 inches and the second, 4.31 inches. I understand the varying widths since the spread of the second column compliments the two larger horizontal photos on top of each other on the opposite page. 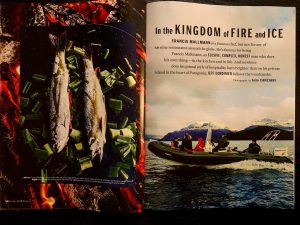 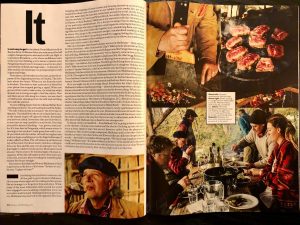 The next page has one column, still 2.37 inches and the rest of the page, extends across to the opposite page, with items featured for how to pack “when it’s a wild, wild life.” The last page of the story has two columns again, same varying widths, with a filler (long box) that gives details about Mallmann’s world. The opposite page has four vertical photos equally balanced with a smaller photo inset in the lower right photo. The layout of this story has variety, with more photos than the feature on the actor but is still not cluttered and with a simple design addition of a small black rectangle acting as an indent for a few of the paragraphs, similar to the drawn red circle in the other feature.

In “Sriracha Is For Closers,” an illustration covers the entire open spread, with the title and  introduction backed by a yellow 3-dimensional box. It compliments the illustration which looks like a virtual scene of the workplace featured. The story is laid out in three columns, measuring 2.37 inches as in the ESQ IQ section. No photos are included on the following pages but yellow fills in part of the margin and in the gutters, and a side bar in yellow, describing WeWork in more detail, with a pull quote in the upper right-hand corner. The bold yellow fillers make the pages pop. The issue and page numbers are highlighted and in a 3-dimensional, slim rectangular box on both pages.

For the last section I want to cover, it’s more a style layout, featuring actor Jimmi Simpson, showing some wardrobes that add “pattern and personality” for a man. There are two fillers (side bars) talking about Simpson’s career and some of his opinions. There are also descriptions of the outfits featured, as well as a two pull quotes which fill in some space in two photos of him photographed, waist up. 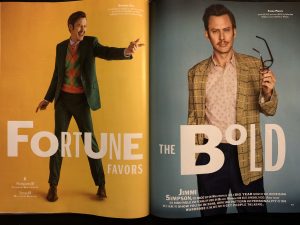 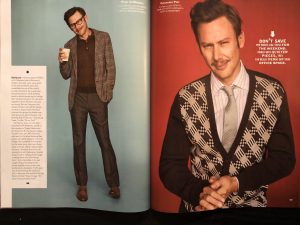 There is a thin, crisp line across the top and bottom of most pages except for the main feature story. The top and bottom lines are approximately .5 inch. (I will use picas in the upcoming weeks to be more precise.) It varies for margin on the first page following the opening spread of “Fortune Favors the Bold,” which is the last layout I talked about. The left margin on the left page is stark white against the tame teal, with the side bar extending out of the margin.

Between the small black and white Esquire smiley face that shows up on the cover and throughout the pages and thoughtful illustrations and humorous or sarcastic advice, to use of lines, boxes, and photo placement, the designers and editorial team create captivating pages whether multiple lists, features, or a cultural guide, not wasting white space but also being cautious to not clutter or distract the reader. There is variety no only by section but from page to page, preventing boredom and keeping the reader engaged.