Fast Company semi-recently went through a slight rebrand in an attempt to make the publication a little more modern and less business-casual.  Think more SF tech company.  They simplified the logo slightly and started to rely a lot more heavily on imagery, going for a more bold persona throughout.  Given that images have such a huge part in character being conveyed, this choice has really elevated the magazine and obtained the status they hoped it would.  When using photos, they have intense color, they’re often shot in a studio, and they’ve very dynamic.  Even the story that uses black and white photos is full of movement and feels fun and light, despite the lack of color.  The “Green Means Go” story is perhaps the opposite and is much more in tune with Fast Company’s general use of color.  The photos use bright green and red with very intentionally shot portraiture and things in general.  It’s extremely stylized and basically makes the character of the story; not to mention it’s beautifully shot and incredibly interesting to look at.  Even looking at the “Just Doing It” story, where they profile Wieden & Kennedy creatives, everything is shot in their office and the lighting is bright and interesting (although it does help that Wieden is already such an interesting place baseline).

Illustrations are also used in smaller stories and infographics, and they’re some of my favorite parts of the publication.  They’re often line drawings that are cute and colorful, matching the theme of the story and move the piece along incredibly well.  They never look hand-drawn, which is good considering the content of the magazine, but they still have so much character and personality that they come of beautifully with the stories they’re a part of.  And while most of the time the illustrations are pretty small pieces, there’s sometimes a story that relies on them, and they dominate the page.  The reason I mention this is simply because it’s done so well that nothing feels disjointed from the stories that rely heavily on photography.  Because the color pallette is still bold and colorful, and everything is very linear and modern, the illustrations flow beautifully with the photographs and the publication feels fluid and connected as a whole.  Fast Company really knew what it was doing with their images.

The images are also full-bleed most of the time.  They draw you in, they catch your eye, and they really make the story that much more engaging in general.  When using photos, they’re most always rectangular and either cozied into the text or full-bleed dominating the page; when using illustrations, they’re either multiples that are used very small in groups as part of an infographic or something, or dominating the page in full bleed.  As far as type goes, it can be placed over images when they’re dominating the page, however when they’re not full bleed or full color the text generally doesn’t directly interact with the images.  It kind of hovers around it in the columns and gives more structure when the illustrations/photos are so bold and chaotic even.

Overall, Fast Company put their weight behind their images and it really did wonders.  They truly make the magazine. 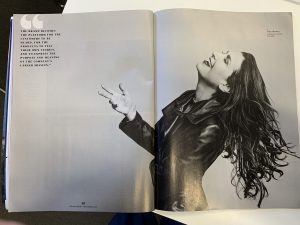 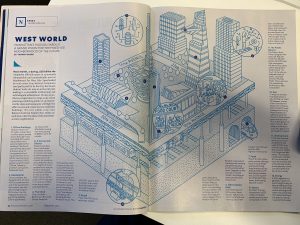 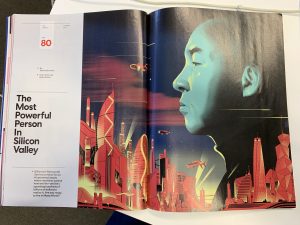 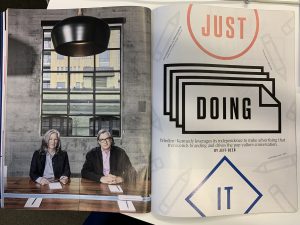 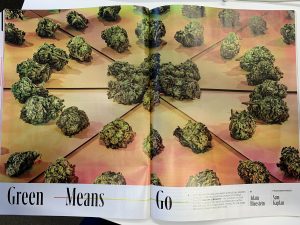 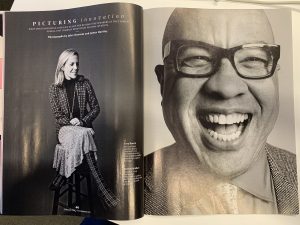 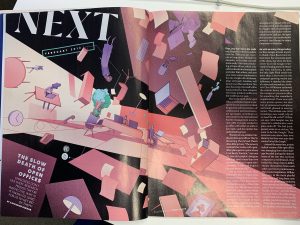