What’s great about The Economist magazine is that it is consistent with its design. With 51 issues printed per year, they pride themselves on their straight to the point stories, so it makes sense that almost every page (besides a few) has three columns of text with a bleed of 10 3/4 x 8 1/4 in (According to their Specifications Page) With roughly 80 pages per issue, stories are crammed onto the page, as each issue has to fit more fifty or more stories into the deck. But that is, in essence, what readers of The Economist want; they pick up this magazine in particular because they want to be educated on as many things as possible, and don’t mind all the pages they have to get through. Images are sparse, and are only added if they elevate the text, rather than distract; upon inspection, it seems that cover stories are allowed one image.

The Economist  layout is a 12-column grid, so that they can easily switch between four, three, or two columns and have it be evenly spaced every time. To me, this is the best grid they could have chosen because the tight columns do not allow the reader’s eye to wander; they read the story, which flows immediately to the next article (which is only separated with a bold header). I wish they applied this method to table of contents; the first page of the table of contents includes information about the cover, making the designers have three columns. However, they visually look strange, because the third column on the right includes photos, making the margins look bigger. The second page of table of contents is only two columns, which causes some dissonance because the two are not consistent with one another. The table of contents also includes lots of negative space, which seems very uncharacteristic. 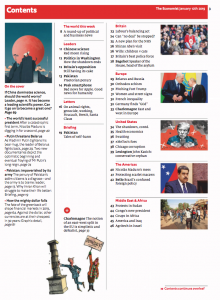 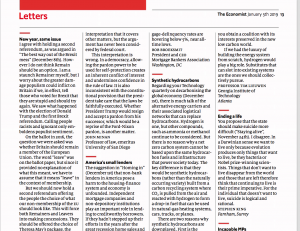 (Table of Contents vs a spread from The Economist)

Overall, I think The Economist utilizes as much space as possible. Upon first glance the pages seem to be bursting at the margin with Milo Serif Bold (Source), but that is because they are catering to their reader. They know their reader wants to read, not look at flashy imagery.