Format: The magazine I will be doing my field note assignments for is Harpers Bazaar. They are owned by Hearst magazines and publish monthly. Publishing monthly has been effective for them because they have such a large circulation and still have many advertisers that work with them. The physical dimensions of the cover is 10.75 by 9 inches and the average number of pages is 300 +/- 20 pages, typically varying on the amount of advertising they include. 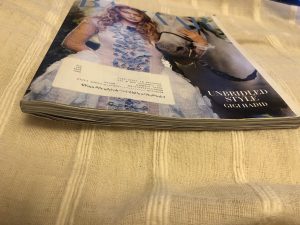 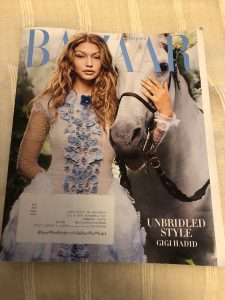 The size of the magazine is thick, which is great in theory because it makes consumers believe they are getting a lot of content for their money, however more than half of the magazine is ads, making it hard to get a reader to see the content that is displayed on the cover.
Grid: The margins on the top and bottom are usually 8 cm except in cases where the designer used a shape to lay out the text. 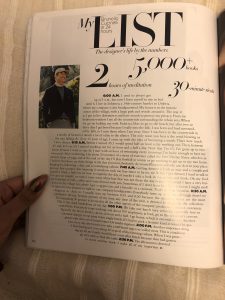 If the right and left margin happens to be the gutter it’s set to 1 inch, if it’s not the gutter then it is set to 8 cm. The width of full-page columns of text varies from 1.5 inches on the smallest end of the spectrum and go large as 3.5 inches, depending on the article. The length typically 8.5 inches, rarely being larger but occasionally shorter than that on pages that don’t display a lot of text. Usually, Harper’s Bazaar sticks to two columns of text and vary of the width of the column, but they sometimes also do 3 columns of text when there is a longer interview. The two column text layout is effective because it paces the reader by not having too much or too little text per page. Also, there are plenty of design choices to make with two columns of text rather than multiple columns or just one. 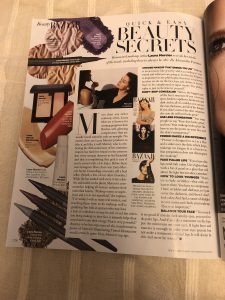 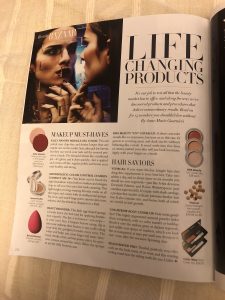 On a typical fashion or beauty article, there are much more photos than there are on a Q&A or feature article. The fashion and beauty spreads are 1-2 pages long, occasionally being interpreted by an advertisement, and usually have a picture for every product mentioned, which are usually at least 5. This may be because people want to have a visual identifier of the product that is being recommended, perhaps to save to memory for a future time. It is more likely to remember what they read about in the article if there is a picture to follow. A feature article on the cover star tends to have more photos 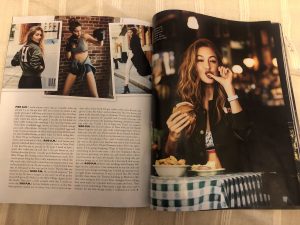 than a feature article about anything or anyone else. This may have to do with just having more access to the cover star because they did a photo shoot with them, rather than a design choice. Feature articles average to be around 4 pages long, this is likely because any longer and the reader may lose interest. 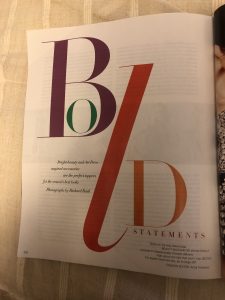 This is a noteworthy use of white space because there is nothing on either side of the “l” in “Bold”, causing the eye to be attracted to it and read the letters surrounding it. It was effective because, in conjunction with the color red, the wordmark becomes effective at capturing the reader’s attention.