The publication that I have decided to analyze is bon appétit, a monthly food and entertaining magazine under the parent company Condé Nast. The magazine which was established in 1956 and has provided its audience a plethora of recipes to try, news about up-and-coming chefs and restaurants, as well as articles ranging from trending ingredients to celebrity food secrets. 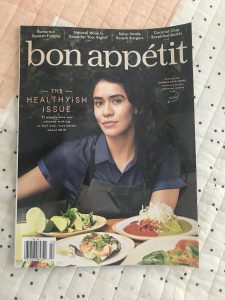 As previously stated, bon appétit is a monthly magazine. Its final trim size is 8” x 10 7/8″ and has an average page count of 100 pages. The February 2019 which will be highlighted here had a total of 96 pages. I think the size and page count of this publication works for what I believe to be the target audience of busy, youthful readers who need quick recipes and short reads. The dimensions also allow the magazine to be tucked into a knapsack or totebag without hassle. Additionally, the newspaper-weight paper makes the magazine light.

The grid of this magazine was a little harder to pin down given that the columns shift between a two-column layout to as much as an eight-column grid. Two spreads, were even aligned vertically instead of the traditional horizonal left to right orientation – an example can be found below. 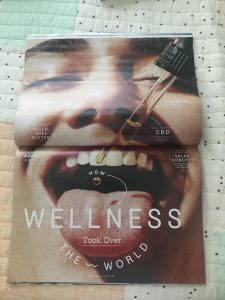 Photo of one of two vertically-aligned page spreads in the February 2019 issue of bon appétit.

On other pages, the grid was broken up into nine equal blocks to place pictures, or as small as what appears to be an eight-column grid to place text. In many instances, the text, though placed on the eight-column grid, would have columns that seemed to be two or even three of the eighths combined. 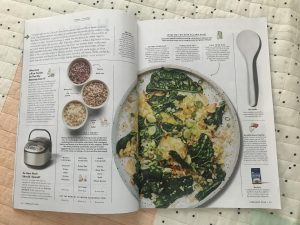 Photo of a page spread from bon appétit’s February 2019 showing the grid layout.

While the varying grids – or hat appears to be varied to a novice like me – seems to be confusing, I think for the average reader, the changing text placement and column widths is probably refreshing and exciting, again in line with the younger, more modern-thinking audience. Also, given that much consideration is given to type treatment, nothing is lost in terms of readibility.

The top and bottom page margins were 1/4″, while the right and left margins were 1/2″. I believe that these margins were appropriate as it allowed just enough room on the left and right sides for adequate thumbspace while the top and bottom margins had more room to play with the placement of folios and headers. The gutters were 1/2″ wide and would sometimes contain a thin rule to allow for sectioning of different text clusters. This also allowed for improved readibility.

On first glance, some of the page spreads can seem a little cluttered given the many elements and type treatments (as can be seen in the example above). However, the designers allow much of the magazine to live on white or light-colored plain backgrounds to give the eye space to rest. 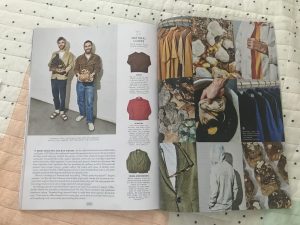 Photo of a bon appétit photostory spread in the February 2019 issue.

Nine images appears to be the maximum amount of photos placed on one page. But, the designers are careful to make the adjacent page mostly white to give the spread breathing room, as in this example.

In other spreads, the images are photoshopped and scaled down to both lend to the hierarchy of the mini stories or recipes, and to keep the magazine from looking too busy.