Unlike a number of magazines which tend to stick to a certain groups of typefaces which they use every issue in different ways, it appears that bon appétit has a tendency to feature a different typeface per issue depending on the mood. However, Futura is a staple.  To illustrate this point, I will focus on the December 2018 and February 2019 issues. The only item that appears to stay the same is the nameplate which was modernized in 2011 and was designed with a custom typeface created by Tal Leming. 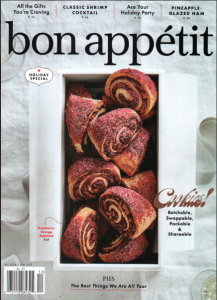 Image is of the December 2018 cover of bon appétit. | Credit: Fonts in Use

In the December 2018 issue, the typefaces Beatle, Grifo, Grifinito and Futura. The bon appétit logo is in its usual position at the top of the page. Above it, highlighted stories are written in Futura – this is also true of most issues including the February 2019 issue.

What’s different in this “Holiday Special” issue is the bold Beatle typeface that draws attention to the main story about cookies. Though the text under it still placed in the signature Futura typeface.

One bit of note is the “PLUS” placed at the bottom of the cover which was written in Grifinito. While noticeably different, it is not very distracting as is meshes well with the Grifo text that is in the same family. 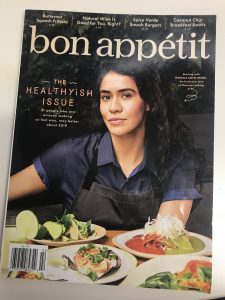 Conversely, on the February 2019 cover, Futura seems to be is the only typeface that was used from the cover lines to the text that reads “The Healthyish Issue.”

At first, it looks like the typeface is entirely different in some areas, but after observing the typeface more closely, I figured out that to get the ‘Y’ to look different than a capital Futura ‘Y’ looks, the designers simply used a lowercase ‘y’ and sized it to fit.

The crossarm in the ‘H’ looks like it was also fiddled with a little it sports a little wave that matches the rules that balance ‘the’ above.

Inside, the issues, the Futura typeface family is used as both display type for headlines and department headings as well as for body copy. The designers simply play with weights, heights and space to give the illusion of variety. 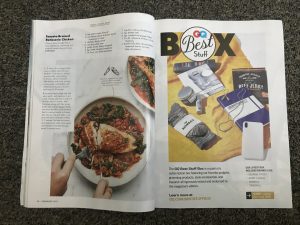 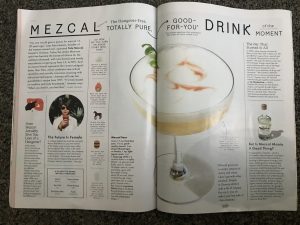 It is only with special issues like the December 2018 issue, that we see the display typefaces used on the cover incorporated inside as headlines and subheads. Though, Futura is still used as the body copy typeface. 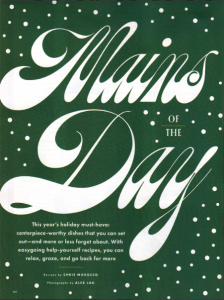