Mother Jones is consistently simple and traditional in its use of color. A notable feature of the publication is its use of color in the nameplate. While it is always in the same place in each issue and uses the same typeface, it changes color depending on the illustration or picture. The color is repeated in some part of the picture or in the text, which gives a good sense of uniformity on the cover.

Colors of text on the cover also coincide with the colors in the illustration. Promos are different from the main headline, as well as bylines (if included). It establishes a hierarchy that directs the importance of each. 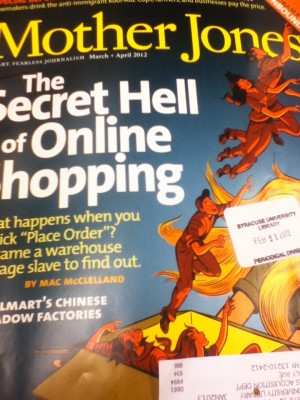 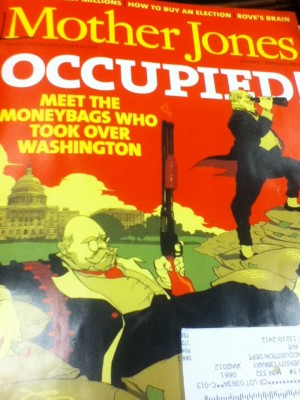 Depending on the illustration or photo, Mother Jones also implements a lot of reverse on its covers. The colors of the headline and nameplate are never the same, which allows the reader’s eye to move from piece to piece and differentiate them. In this sense, the headlines, promos and nameplate don’t compete with each other. Most of the time, the news magazine has a lot of text on the cover and using different colors for each section of text helps the audience move throughout. On occasion there is a promo tab in a bright color in the corner that is successful in attracting attention because of its blatant contrast.

In terms of visual clues, there are consistent ones present from issue to issue. For example in the table of contents, there is always a colored circle with reverse type. “Motherjones.com” is always reversed in the circle to stand out. Moreover, the date, in this instance “March + April 2012” is in a different color than the body copy. The color matches the circle in each issue. Page numbers in the TOC also use the same color, and it is successful in showing that they belong to the same section. I feel that reverse is often used for information that they really want to stand out, and it works. 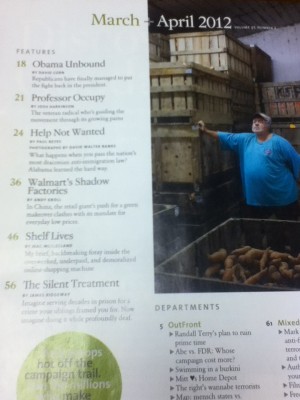 However, Mother Jones could be more innovative in their color use. They mostly draw from their photo and use one or two, specifically in their TOC. Departments throughout the publication are distinguished by different colors, and some are maintained from issue to issue. For example, OutFront always has topics in red and headlines in black. It helps the reader know what section they are in. However, for the department name itself, it again draws from the color of the illustration. 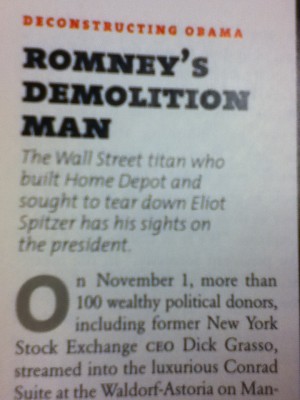 Sidebars and infographics are where the publication gets more creative. They don’t necessarily match with photos, but they do stand out. It does a good job of attracting the reader’s attention and it also reflects the mood of the story. Mother Jones tends to use bright colors because of how text heavy their content is. It succeeds in breaking up the black body copy and draws the eye to important facts, and new information. Additionally, it gives a lighter feel to the more dense topics they tend to focus on. 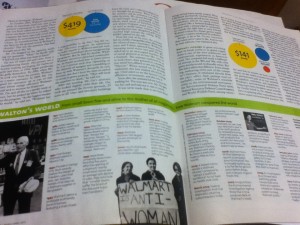 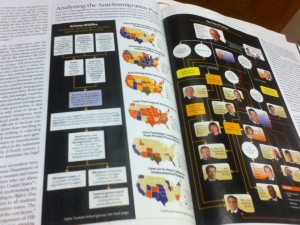