They say that a picture is worth a thousand words, but the images used in Fast Company are worth much more than that. Images are the cornerstone of this publication. They range from bright and bold to muted and monochromatic depending on the story subject. Photos are often large and encompass 3/4 of a two-page spread as illustrated in the examples below. Images are almost always placed in a standard, rectangular frame. Portraits are a recurring theme in Fast Company because the publication is often highlighting business leaders. 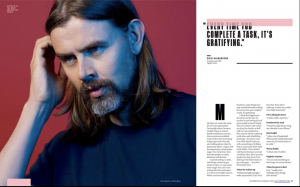 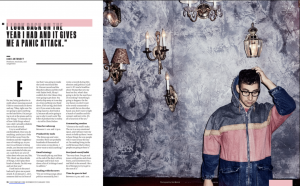 There is a sense of symmetry and every page as a focal point. This is evident in the formatted elements of the publication (the furniture) as well as the image selection.  This sense of symmetry is evidenced by the example from “The Recommender” section of the March/April issue. 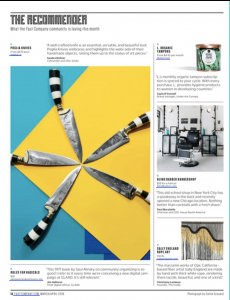 Illustrations are used sparingly but becoming a more popular vehicle for delivering messages. When they are used they are often editorial in nature. In the December/January issue, a story explored the retail world in the age of Amazon. The opening spread of the story depicts ships trying to pass a large monster in the shape of an A. This is meant to represent the sheer power that Amazon has over small businesses.

The illustrations are well done but I think they take away from the rest of Fast Company’s style, which is predominately people and product focused. Other examples of Illustrations are listed below. I do particularly like the illustration for the GoFundMe story because of its take on something that is usually quite sad (disaster relief) and shedding light on the good that a company is doing to make rebuilding lives a little easier. 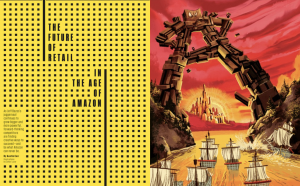 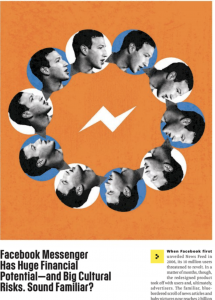 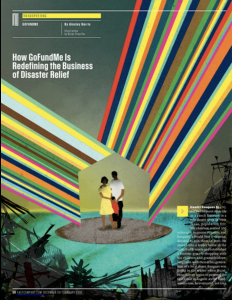 Short captions are often placed within the frame of photos within a story, as shown in the example below. I think this is a good way to minimize the amount of space that the text is taking up as opposed to placing the text underneath the image. Images are curated in away that allows space for text without feeling too “busy.” 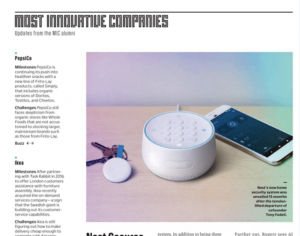 Short captions are often placed inside the frame of the image.

Most stories have just one, large full-bleed image while others have two to three smaller images. Images also almost always follow a certain color/lighting pattern. Images usually have a fluorescent feel, that lends to the publications overall futuristic vibe. The Dec/January issue chronicles the “Most Productive People,” and the images are curated to go with a pink/fluorescent theme. 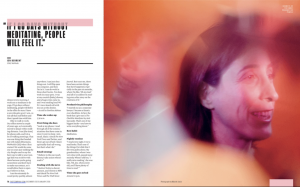