The cover images are always about the cover story being showcased in that issue. Being a food & drinks magazine, the cover image is most of the times, an insanely yummy looking dish or drink, very rarely the cover images are a famous chef or a human being as the person being clicked for the cover image. The images look very fresh and would persuade you to pick up the magazine and read it. The image also sets the theme of the issue which is usually when they are covering trends in food and drinks or when their issue topic is about the season of the year or any other special issue. They very rarely have multiple images on the cover page. Most of the time, the focus is given towards just that one image which is again repeated inside the magazine in the cover story section. In terms of the content of the photo, bon appétit is very diverse and can focus on a variety of meals right from wholesome meals to snacky dishes to desserts and alcoholic/non-alcoholic beverages. The cover image is always complemented with a witty tagline that is placed close to the image or close to the nameplate of the magazine that completes the message the cover image is trying to portray to the readers. Having said all this and the variety showcased all the cover images of bon appétit evoke a sense of temptation and give rise to cravings and hunger for sure! 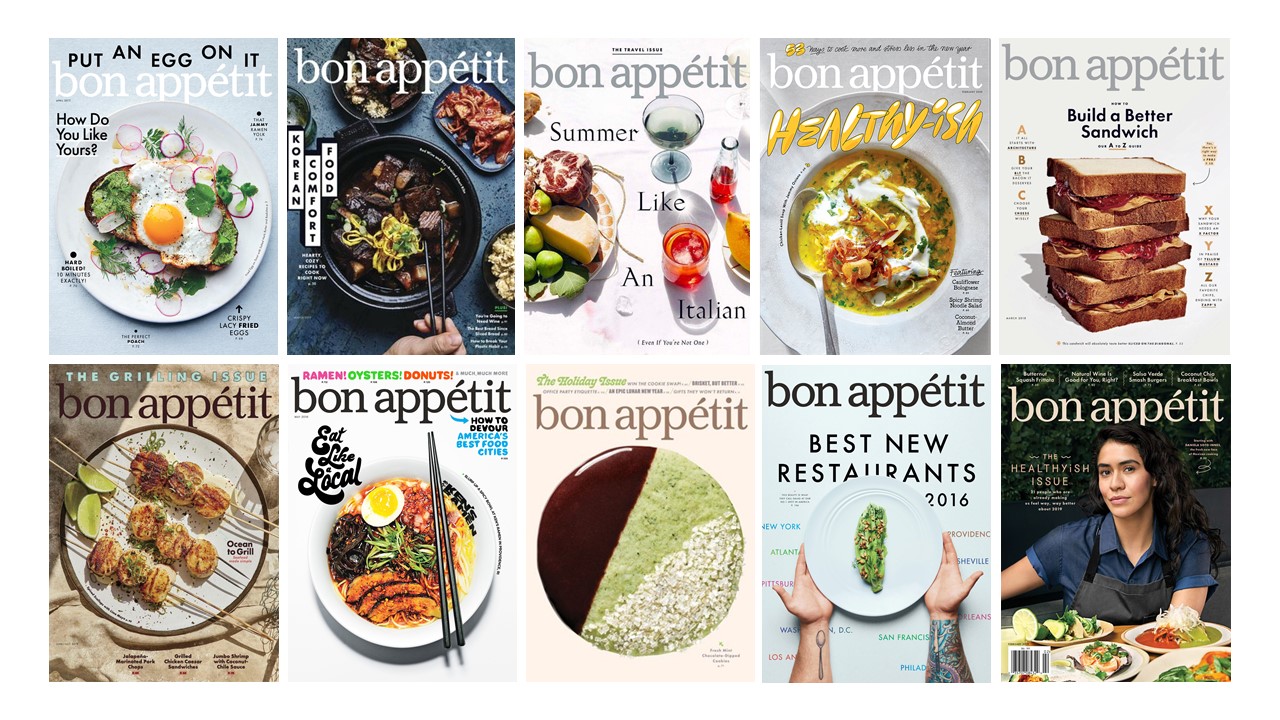 The variety of themes showcased in the cover images of multiple issues.

Images inside the magazine:

On the inside of the magazine, as well all the images on food and drinks are always given primary importance to on the spread. They are showcased on almost every page next to their respective recipe covered. The magazine’s minimal aesthetics idea is continued in the images as well, where the image does not look too busy the subjects are always still since they are either food or drinks. They are mostly close-up shots taken from a top-view angle. The imagery is staged as in the food dish or drinks are styled in a setting and then the photo is taken in a setting as demanded by the art director. In this way, one can agree that photography is nearly choreographed with most of them having a light/pastel background which works well in contrast to the colorful vegetables and meat pieces. 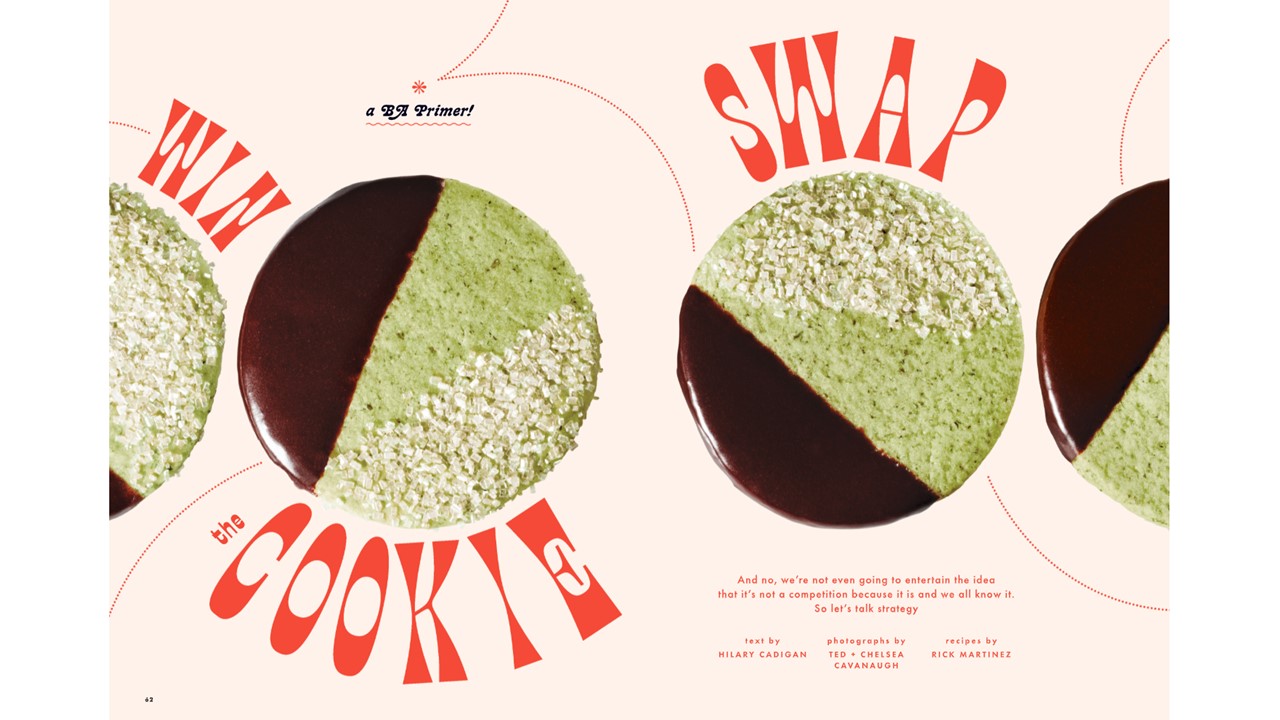 The cover story featuring a full spread. Kindly notice the contrast between the image and the typeface of the textual element and the placement of the text with the image 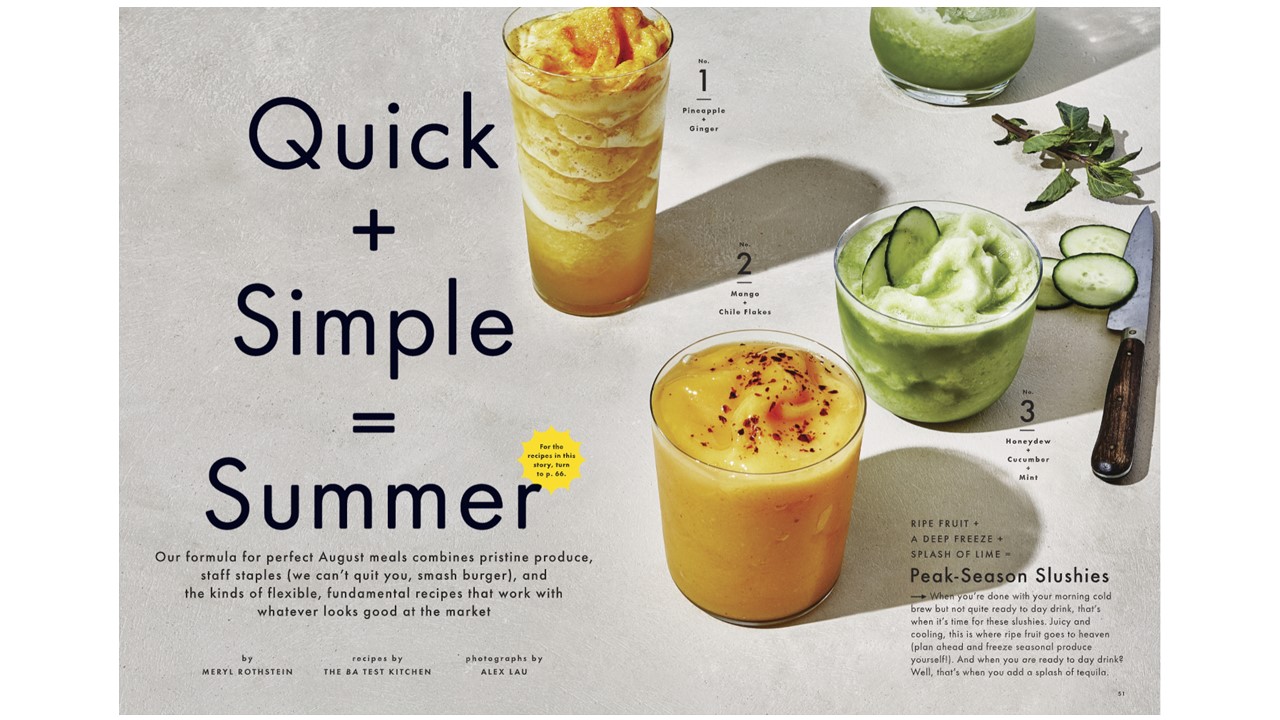 Relation of the textual element with the image

Use of Images on the page:

Since photography is staged for many stories covered in the issue, the designers even predict the size and placement of the image on the page and click the image accordingly. Most of the images are rectangular. Whenever there is a repetitive element in the image, the image is usually cut from there. The images are mostly spread across the entire side of the page and sometimes if a recipe is being showcased the designers use 1 full spread showing images of the different stages of the recipe right from its raw stage to the complete look of the dish along with the garnish and presentation of the dish.

Text is minimum. The headlines and witty taglines are what get noticed since the steps of the preparation are written as body copy. The text is placed in a way that interacts with the image and the typeface of the taglines is a derivation of the image. 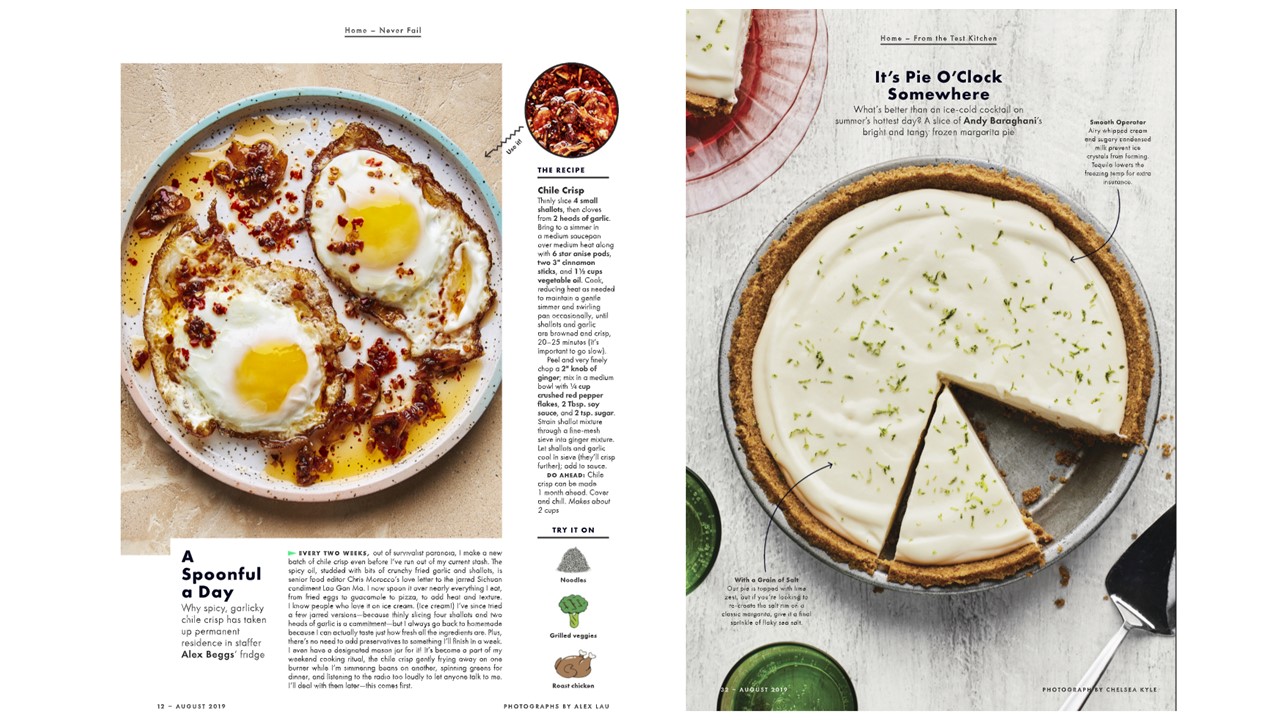 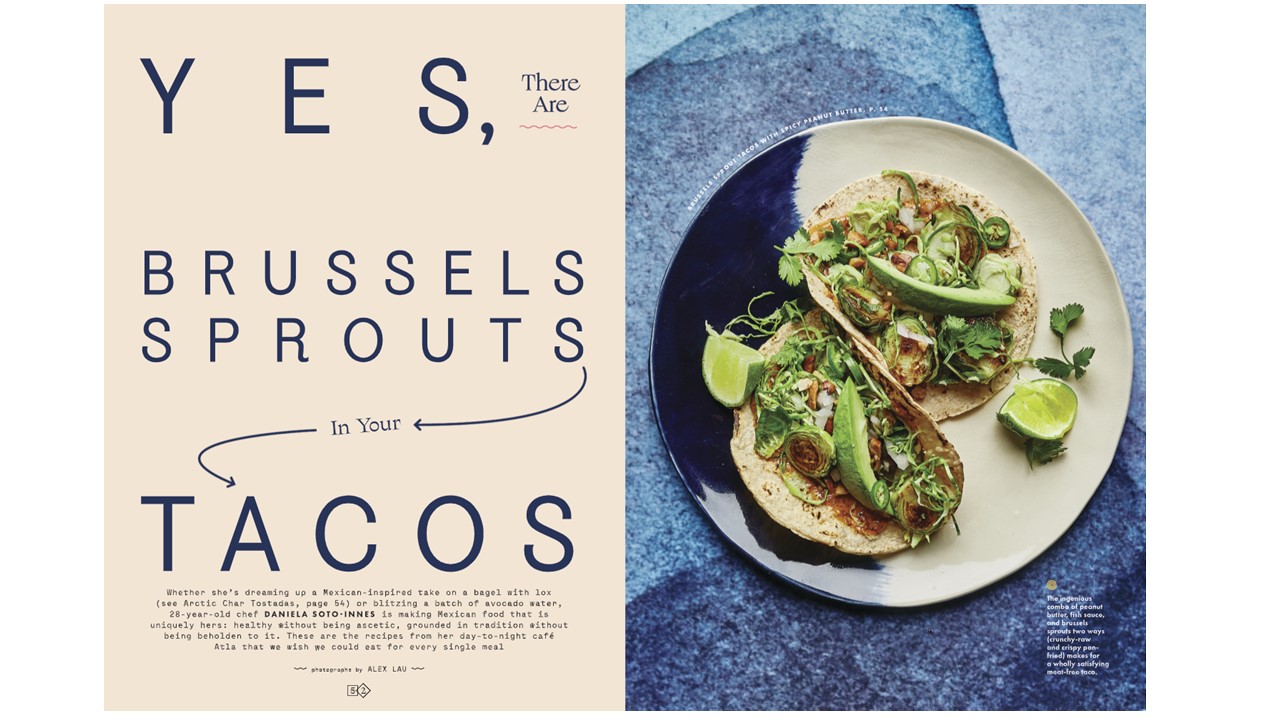 Types of Imagery & Frequency of Use:

Photos: Photos are used often especially when it comes to cover images. The images as staged and when I look at them the concept of still life is what comes to my mind. It’s like the images are captured in that moment of stillness that makes your mouth water and triggers the temptation. All the photos are strictly color and this works for a magazine like bon appétit which is about food, drinks, food trends, lifestyle and entertainment showcasing the glamour and freshness through the dishes showcased.

Illustrations: Illustrations are used less in frequency as compared to images, but they are always used to complement a textual element or the image. They are also used to summarize certain aspects of the recipe. The illustrations are mostly single-line drawings which are in singular line weight and are overlapped with the image.

Graphics: A very minimum use of graphics is done as the magazine covers food recipes thus it is not that heavy on data information and representation. But sometimes when there is an issue focusing on a particular them such as an issue on food & drinks to have in the summer season, they showcase a full spread infographic concerning the food eaten in the summers. 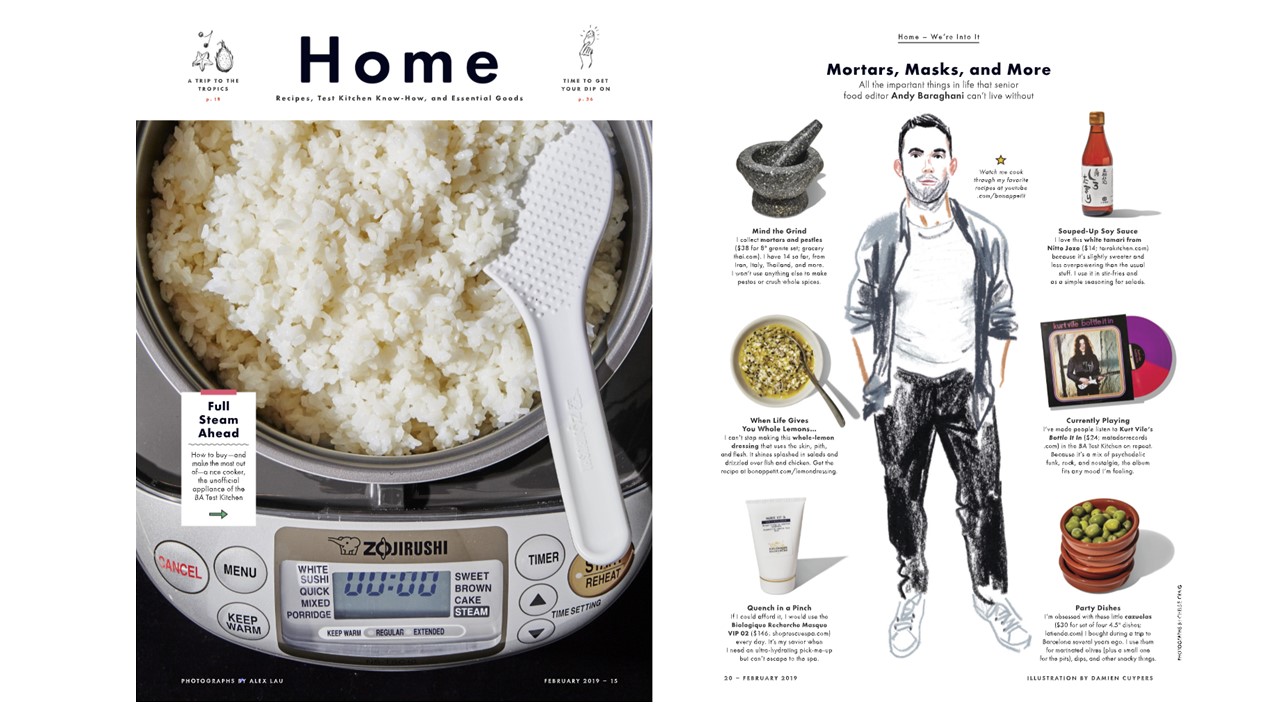 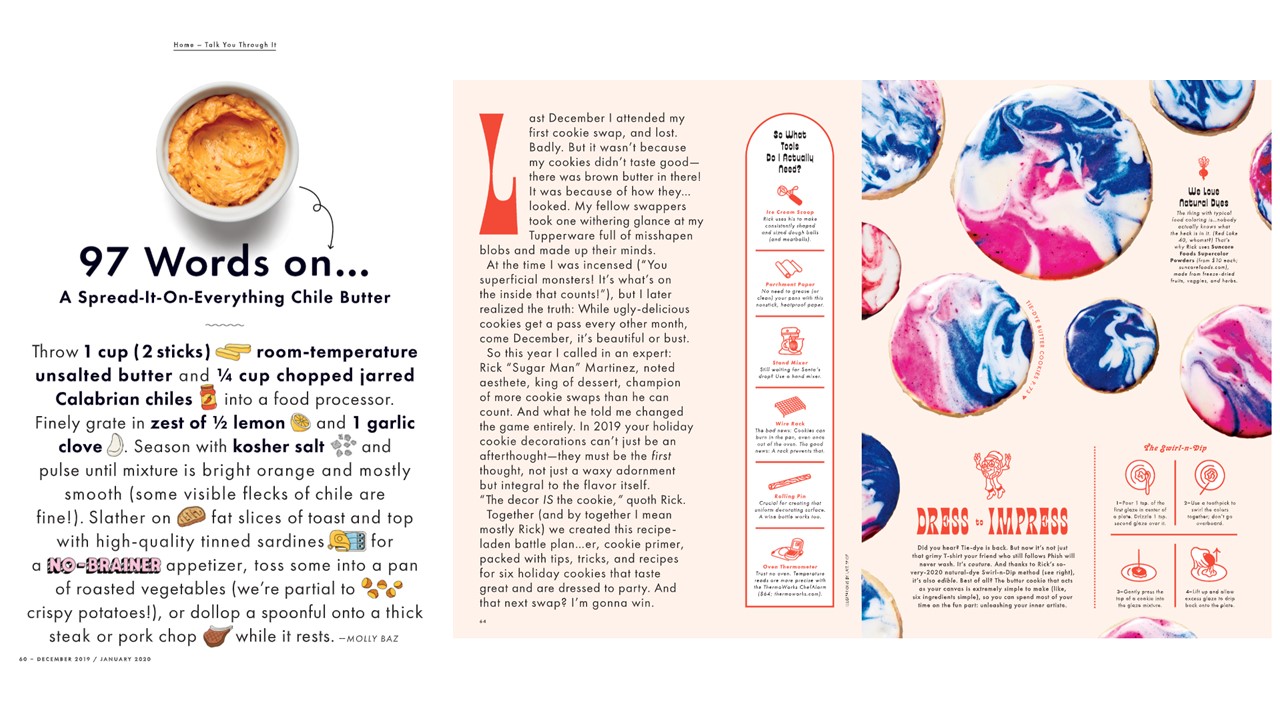 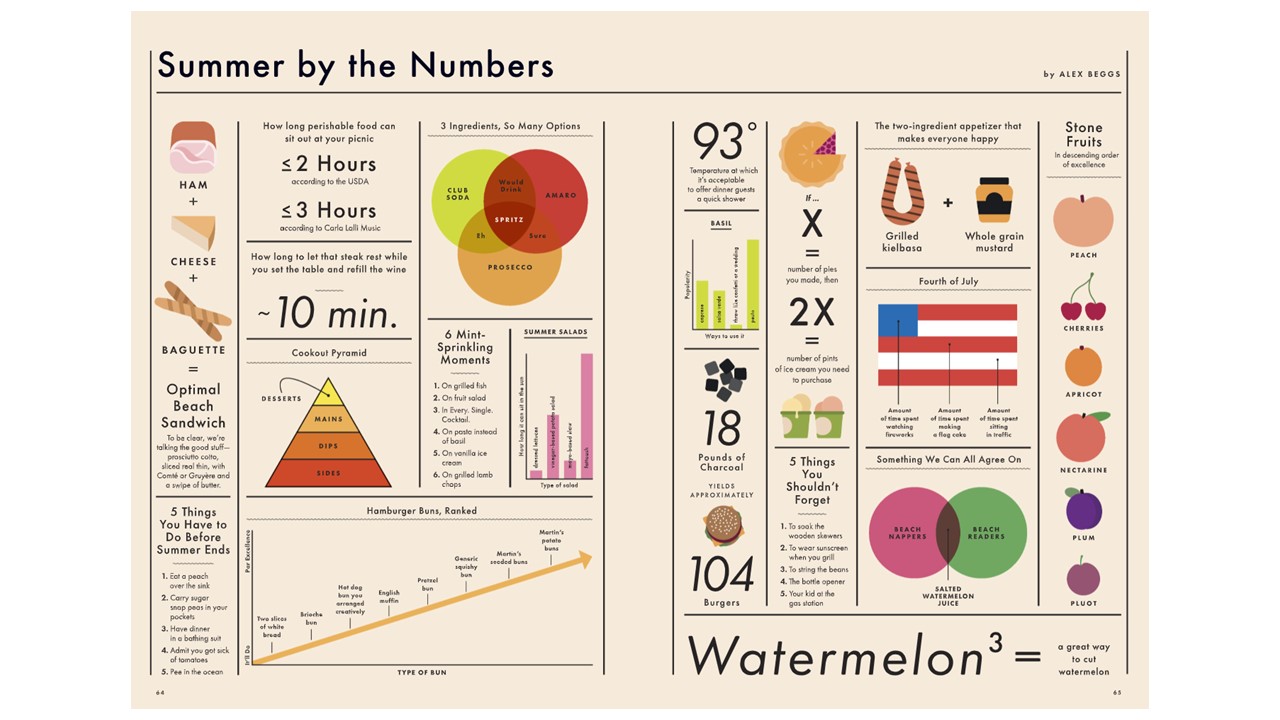