New York Mag primarily uses photographs of people. There is a combination of photographs that depict movement and still portraits that appear to be a little more serious – the majority fall in the second category. The second half of the magazine features more photos of objects. This makes sense because the stories in this part of the magazine are mainly about product reviews, the arts, and culture. Sometimes there is a photo of the object by itself, other times there are photos of people holding the product that is being discussed

Photos are a critical part of this magazine, as there are photos on almost every single page. Within one of the issues that I own, 25 out of the 88 pages contained photos that took up a majority of the page. The images are usually photographs. Occasionally they will include photos of illustrations; however, this is only if they are created by the artist that the story is about. Most of the photos are in color. I noticed a few that were in black and white but this is because they were older photos from the 1970s. 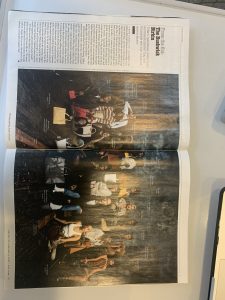 All of the photos are in a rectangular shape. I think this works because it fits the sharp geometric feel of the magazine. As I mentioned in my furniture assignment, the magazine employs many rules, both vertical and horizontal, within their pages. The combination of these with rectangular photos further establishes a feeling of minimalism and sophistication. Sometimes the photos are stacked on top of each other or bleed onto the page next to it.

The cover story typically incorporates ~8 images within its pages. The size of the photos differs from issue to issue. I noticed that every single story in the magazine utilizes photographs to tell the story and propel its impact even more. Occasionally, New York Mag will overlay text on top of an image; however, there is no concrete way that they go about this. For example, in one of their issues, the text started on white space within the page and then finished on top of an image. They inverted the color of the text so that it would be legible to the reader. In another case, the text was placed on an image; however, the people in the foreground were slightly covering the text. 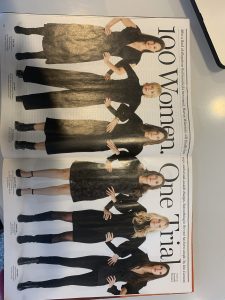 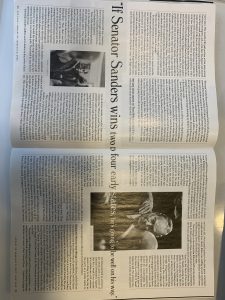