Mother Jones has three departments aside from its features that cover a wide variety of topics. “OutFront” covers a range of things including politics, particular demographics, movements, homes, foundations, corporations, etc. The stories included aren’t your typical front of book pieces, but they are shorter pieces in comparison to the 4-5 page features in the center of the news magazine. They are mostly interesting stories that aren’t as in-depth as the rest of the publication’s focus coverage. 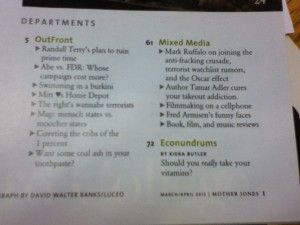 “OutFront” always has the department name at the top of the page starting the section in the same typeface in each issue. It also seems like the same typeface is used from the nameplate. What varies from issue to issue is the color used for “Out,” and based on past publications, the choice seems to depend on the color scheme of the cover. This works to bring variety but also maintain consistency for the reader. Readers can also expect the same layout for the department in every issue, with the department name all the way at the top and a large illustration right underneath. Mother Jones doesn’t implement much innovation with their sections, but they can be credited with being consistent, as well as for their variety of artwork in this department. 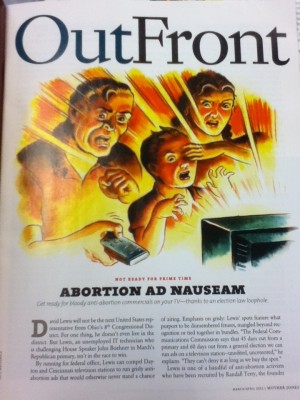 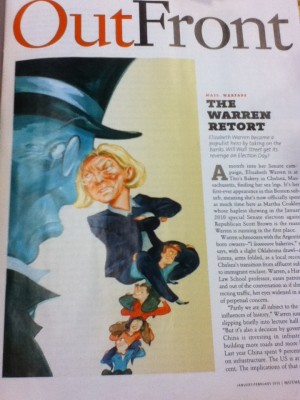 “Mixed Media” follows the feature well of the magazine. The department discusses cultural issues, books, musics, film and technology. Like “OutFront,” the department is distinguished from others with its different use of color. In each issue, the two words change in color. It is similar to the first department, with the name stretch across the top and a photo following. The page hierarchies are nearly identical with the placement of the department name, content and photos. There are always colored sidebars and reverse text, as well as part of the section with a distinct place for book/music reviews. 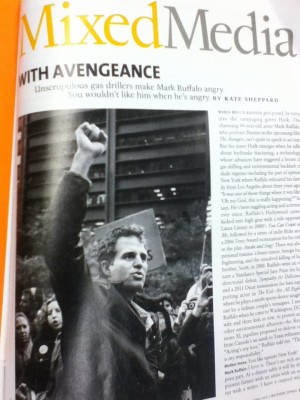 This department has a lighter feel in terms of topic but it also feels cluttered and heavy. It is mixed with continued stories from the feature well. Moreover, the heavy feel can be attributed to the placement of ads, which are not so prevalent at the front of the book or middle, but make a marked appearance at the back of the book.

“Econundrums” is the final department of Mother Jones. Dealing with the environment and health, it’s always the last page of the publication and is a little more distinct from the other two departments in terms of layout. It always has the same graphic/photo with the department name placed to the right, in the same color. Moreover, the same color scheme is always used with the same shades of green. Headlines and subheads are always in the same location. 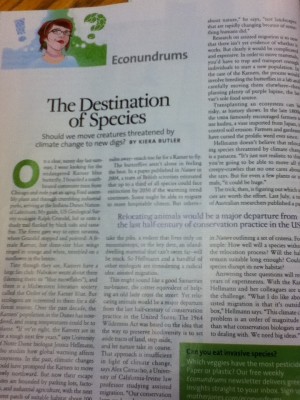 The departments don’t seem to get the same attention to the features. There are 5-6 features in each issue, with heavy text broken up by infographics, pull quotes and colorful sidebars. The features have more variety and are rarely separated by advertisements, unlike the back of the book. Though the features as more lively than the other departments, Mother Jones has a pattern through the issues in terms of how they place photos in feature layouts, how they use two-page spreads for photos without fail in each one, large full pictures opposite headlines, etc. It has a distinct feel but with all the information they have, I think they could do more and be more creative with what they have to work with.