This magazine is clearly swaying on the more liberal side of politics, as seen in their covers that provide a spotlight for democratic politicians, while simultaneously using copy to voice their negative opinions of Trump. As someone who identifies as liberal, I find their commentary funny; however, they are definitely minimizing their readership to those who fall within this specific belief system. It seems to work for the magazine considering they are still pumping out issues every other week. To provide context of the political covers I am referring to, the January 20-February 2 issue features photos of Bernie Sanders, Elizabeth Warren, Joe Biden, and Pete Buttigieg as bobble-heads with the headline “Well, Here We Are.” Below the headline, it reads “Two weeks until Iowa, the race has narrowed. One of these people could beat Trump, right?” This has a clear liberal connotation suggesting that the people who create and write in this magazine are critical of the Republican agenda. 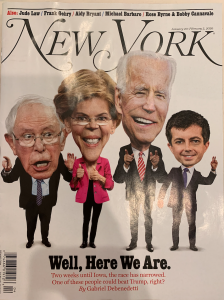 As I previously mentioned, I think that the liberal, somewhat provocative writing style works really well with this magazine because it feels like you could be talking to a friend. In today’s day and age, people like to interact with brands and organizations that have a strong voice and stand up for what they believe in. The New York magazine is very clear and articulate with the causes that they care for and stick to their political beliefs. Their headlines and display text are rather blunt, for example, “Anne Beatts was always more interesting than John Hughes” and “The Republicans Don’t Even Know What They’re Covering Up. But the latest revelations are explosive.” 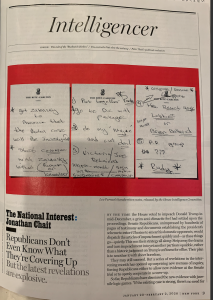 The name of the magazine is extremely straight-forward: New York magazine. It is about culture, politics, and lifestyle, particularly focusing on New York City. This name works because of New York City’s branding as a sophisticated, globally renowned city. People’s previous understandings and experiences in the city are very beneficial in establishing a clear brand for the magazine. Most people have some kind of connection or familiarity with the city, whether it be from first-hand experience or through media. New York City is a very liberal and progressive city – traits that align well with the magazine’s views.

The headlines are very short and concise, for example, “One Year In” is a story about Alexandria Ocasio-Cortez’s experience on Capitol Hill. For the longer cover stories, it usually includes a brief summary below the headline to prepare the reader for what they are about to digest. For the stories that are not included on the cover, it will incorporate a deck to briefly elaborate on the article. As I mentioned before, their headlines are often quite short; therefore, the decks are extremely beneficial because they provide more context for the somewhat obscure and ambiguous headlines. 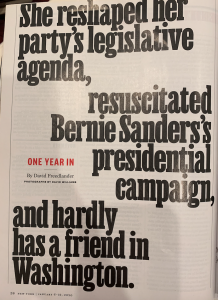 Pull quotes are used quite frequently and use the typeface of the headline for that story. They are unattributed and generally seek to raise an eyebrow from the reader. For example, in an article about Aidy Bryant’s rise to stardom, there is only one pull quote displayed and it reads “I always was having cool sex and had boyfriends.” This quote does not represent what the article is about but it catches the reader’s attention so I suppose it is successful. The captions are generally under two sentences long and are simple descriptions. They are not clever and politically motivated, but rather concise and informative. The New York magazine’s bylines read “By Author X” – it does not use a colon between “By” and “Author X.” Occasionally, they it stylize “By” in italics, but oftentimes it flows right into the author’s name. These bylines work well because they are not distracting from the story and headlines, nor are they hard to read and understand. 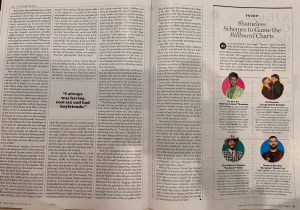 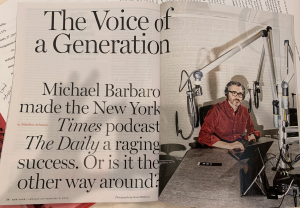 This magazine features four departments, including “Intelligencer,” “Strategist,” “The Culture Pages,” and “Critics.” They are extremely straightforward and describe what the stories within the section are about. “Intelligencer” focuses on politics and thought-provoking pieces that focus on the state of the world today. “Strategist” refers to stories centered around recommendations, tips, and tricks. “The Culture Pages” offers informative pieces about arts and food. Finally, “Critics” offers reviews and discussional pieces about the arts. I think that these names are somewhat creative because on their own, you may not know what kind of stories you would find within that department. However, once you start reading, it all comes together.