National Geographic is known for its outstanding photography, and this is especially pertinent to its covers. Most of its covers present an image from one of the issue’s feature stories, or an image that represents the theme of the issue. Since National Geographic has such a visual focus, the cover has to be somewhat representative of all the photography inside. The cover images vary quite a bit, from photography of nature to portraits to photo illustrations, but all evoke a sense of classic, elegant beauty. 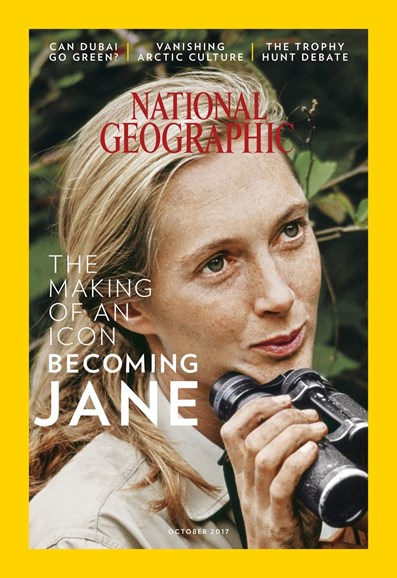 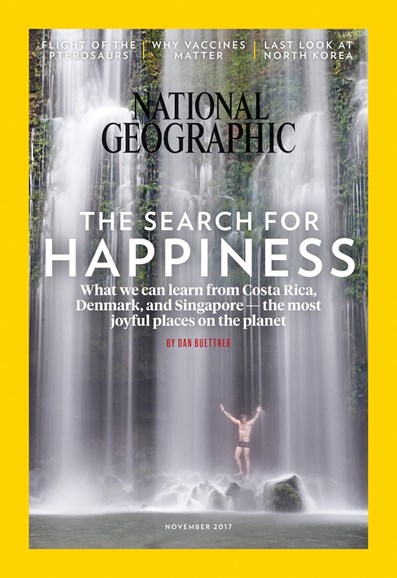 The nameplate is not at the very top of the cover, but rather towards the bottom of the top fourth of the cover. To me, the placement works because it makes National Geographic feel less like a magazine and more like a guidebook. Usually the nameplate is white but occasionally it is in red, black or another color based on the dominant color in the cover art. Since the Nov. 2016 issue, the folio is always listed in the bottom center of the cover.

National Geographic doesn’t use too many coverlines, which again shows the emphasis that is put on the cover art. However, there are as many as six stories represented in the coverlines, but most issues only have three to four. A few issues have hardly any coverlines. For example, the Genius theme was the focus of the May 2017 issue, and there were only two coverlines on this cover and they both promoted the issue theme, not a specific story. 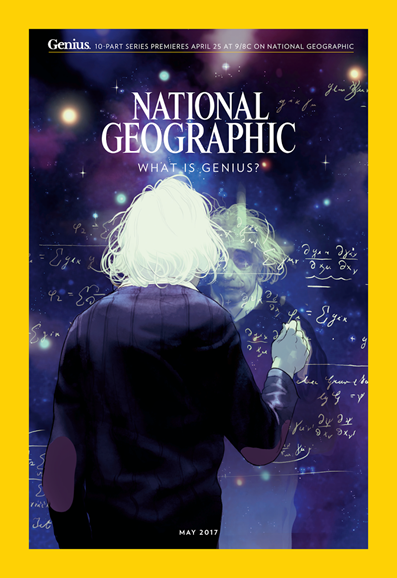 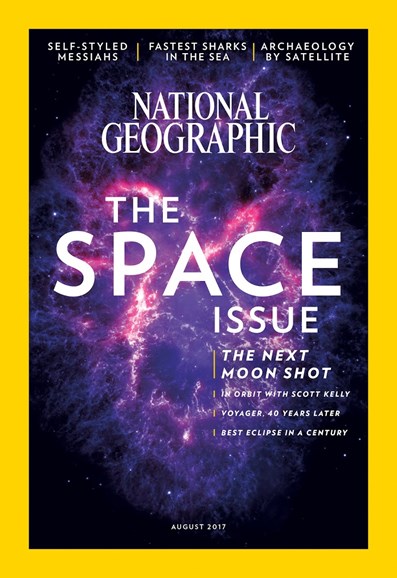 The hierarchy of a National Geographic cover actually seems to go from the center upwards. The image is probably what people look at first, because it is framed by the yellow border and there aren’t many coverlines to read on National Geographic covers. The largest coverline, which usually explains what the photo is representing, is probably what people say next since this text is the biggest (after the nameplate). The nameplate, National Geographic, is next and this varies because sometimes the nameplate is in a different color, layered partially behind the image, etc. Quite honestly I didn’t even notice the coverlines running above the nameplate until I had to actually look at them — this, to me, is proof that the focus of the cover is on the image.

The tone of the cover is very classical and almost evokes a sense of timelessness. Even though the images are often futuristic and forward-looking, the composition is still very classical beautiful. It gives the sense that the writing inside the magazine will be sincere and refined. 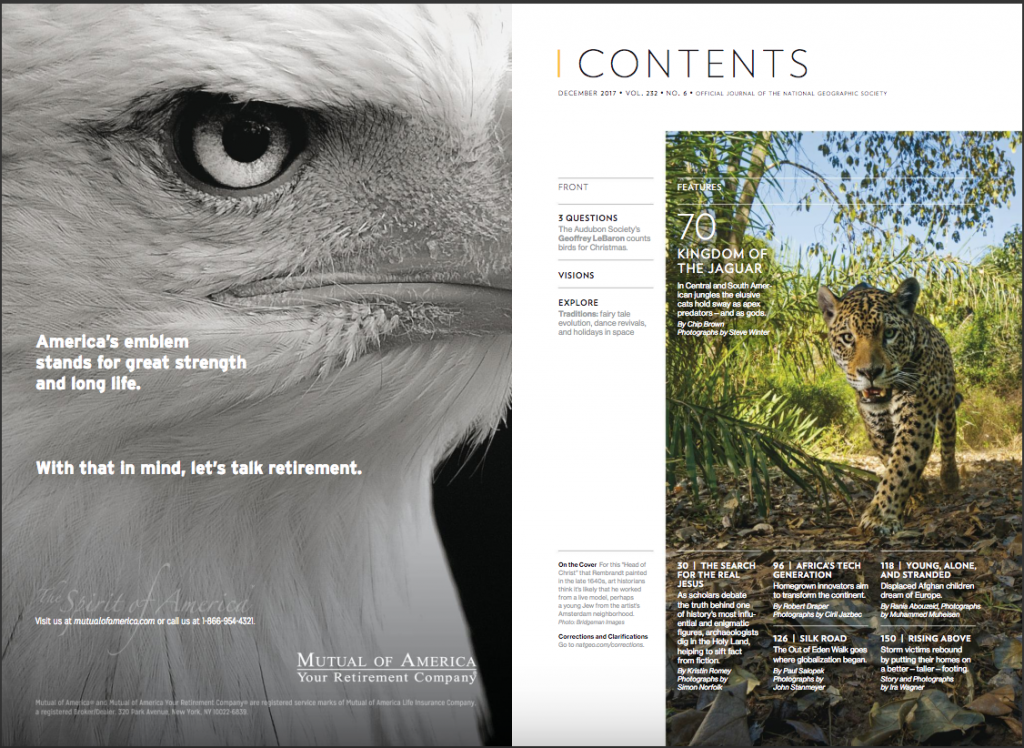 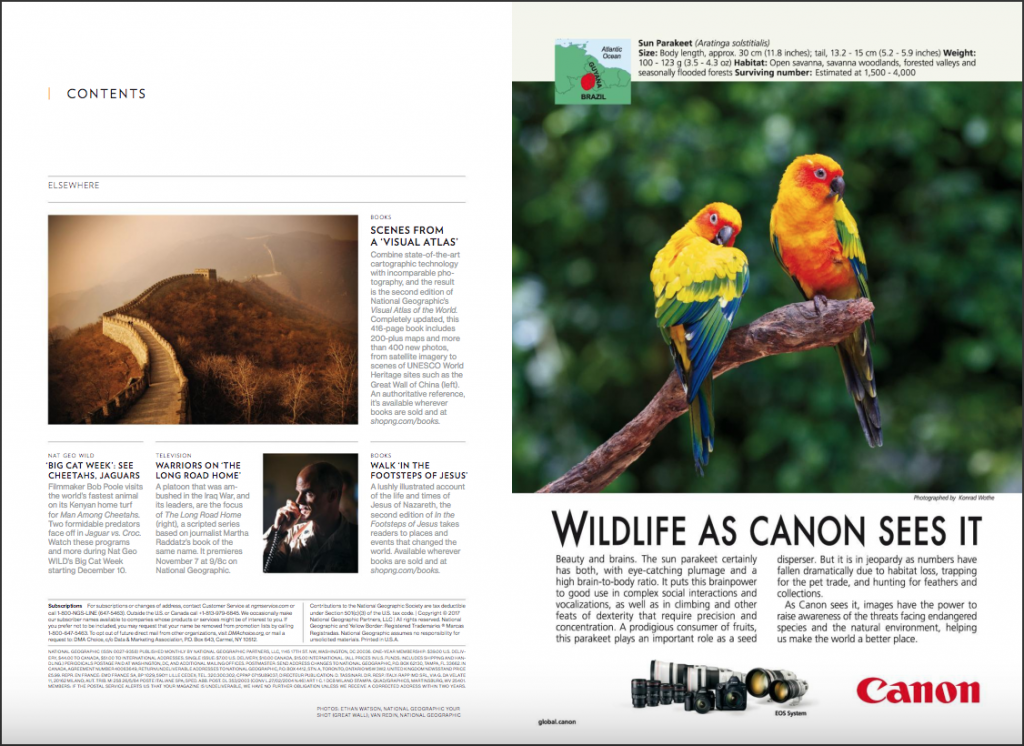 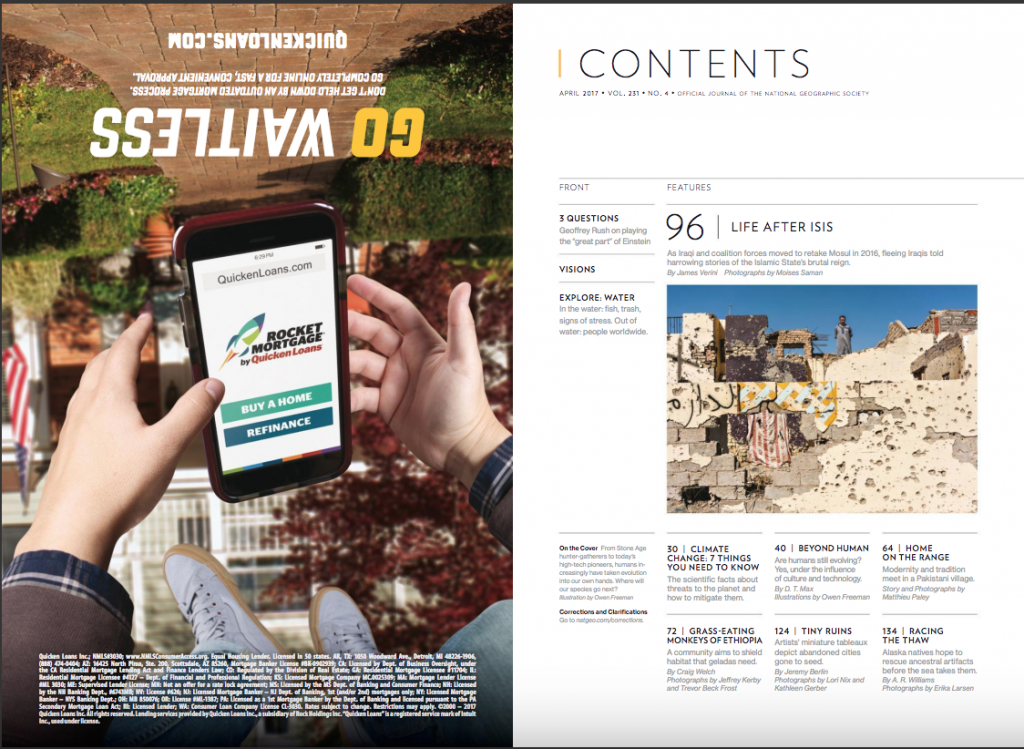 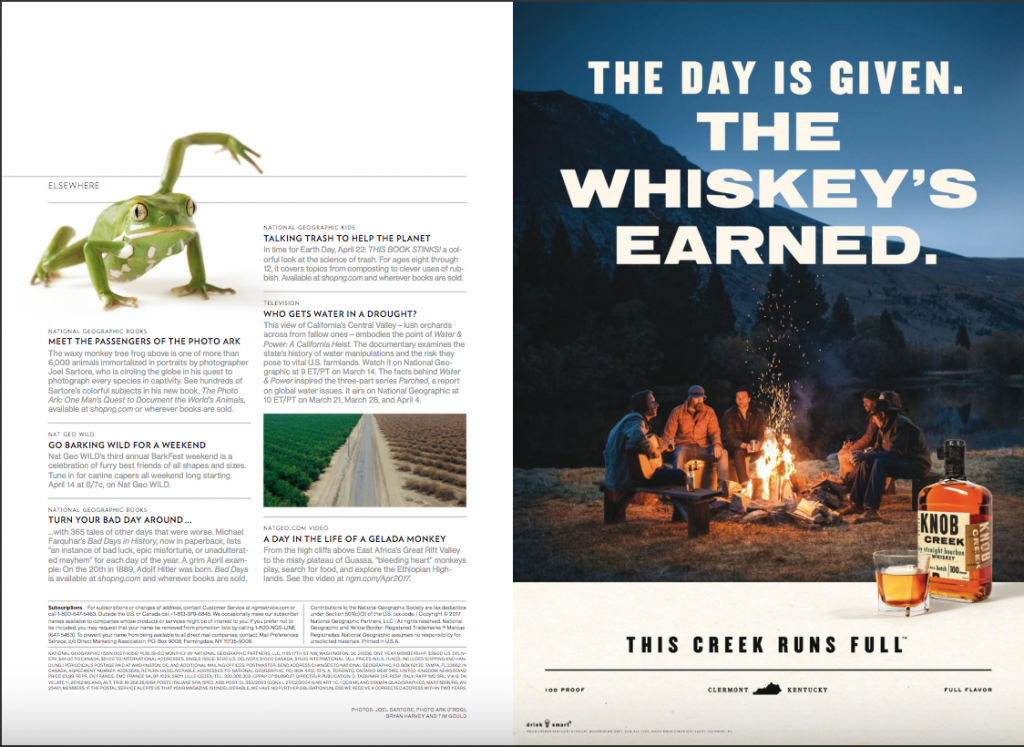 There are only two noticeable departments in National Geographic: front of book and features. The front of book features shorter articles (usually a few pages each) and always include Visions, 3 Questions and Explore. These pages are distinguished by the fact that there are markers for the section on the top of the page. The rest of the magazine — which is well over a majority of it — is filled with features. These stories begin toward the middle of the magazine and run until the very end. They are distinguished by the fact that they only have the name of the story running along the folio, which is also in a different font. Because National Geographic is mostly a magazine made up of features, I think the way the departments are organized and distinguished makes sense. There doesn’t need to be a lot of distinguishers if it’s mostly features. 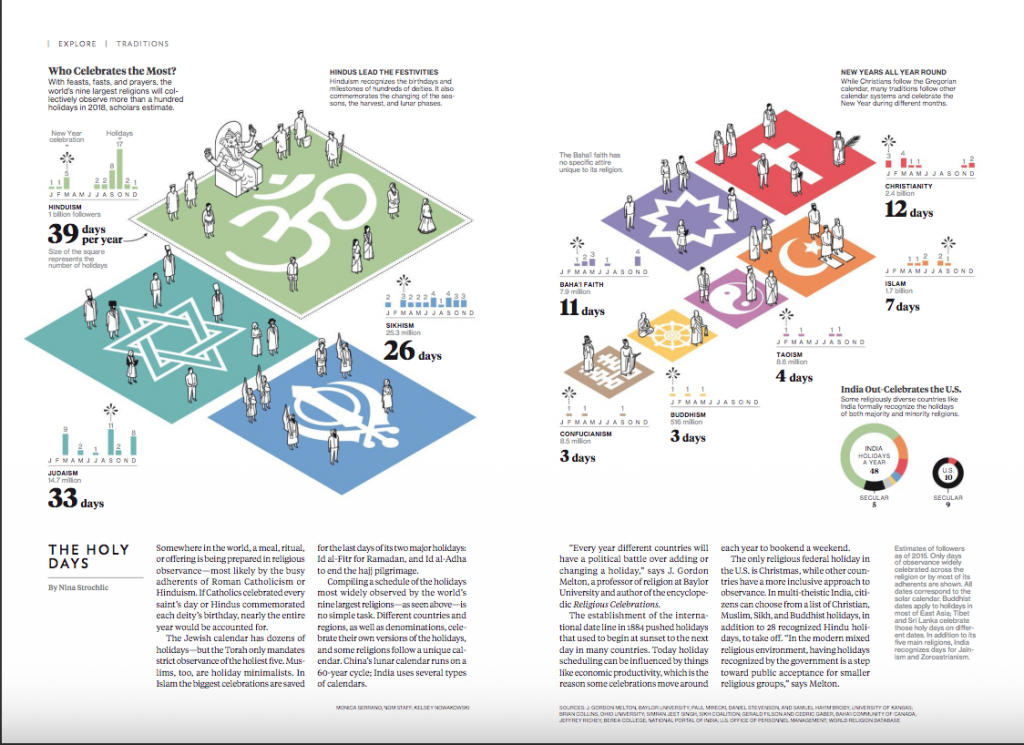 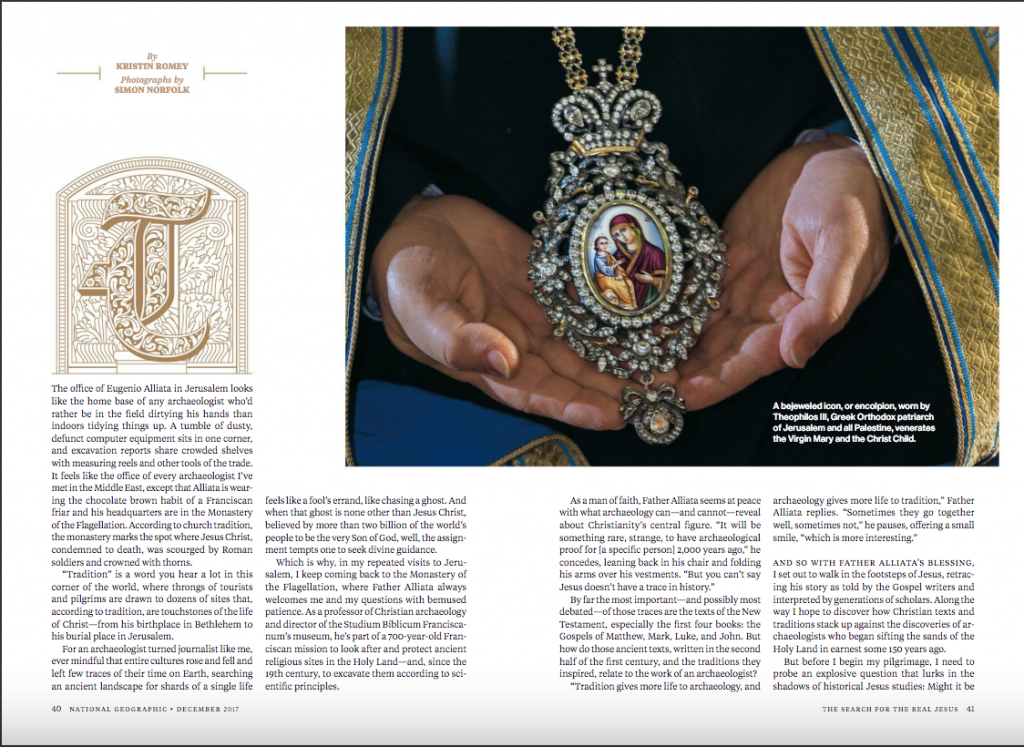 Feature story in December 2017 — notice the labeling along the bottom

Overall, National Geographic’s organization is very minimal but still elegant, allowing the focus to be on the feature stories and photography.