The typeface for National Geographic’s nameplate is NatGeo SemiBold, a custom typeface. While it has varied in size, the look of it has stayed relatively the same, even since its first issue in 1888. The nameplate has always been in serif and all caps. The caps definitely make the name feel very official and strong, and the fact that it has stayed relatively the same speaks to its timelessness — it evokes a classical tone and feel. 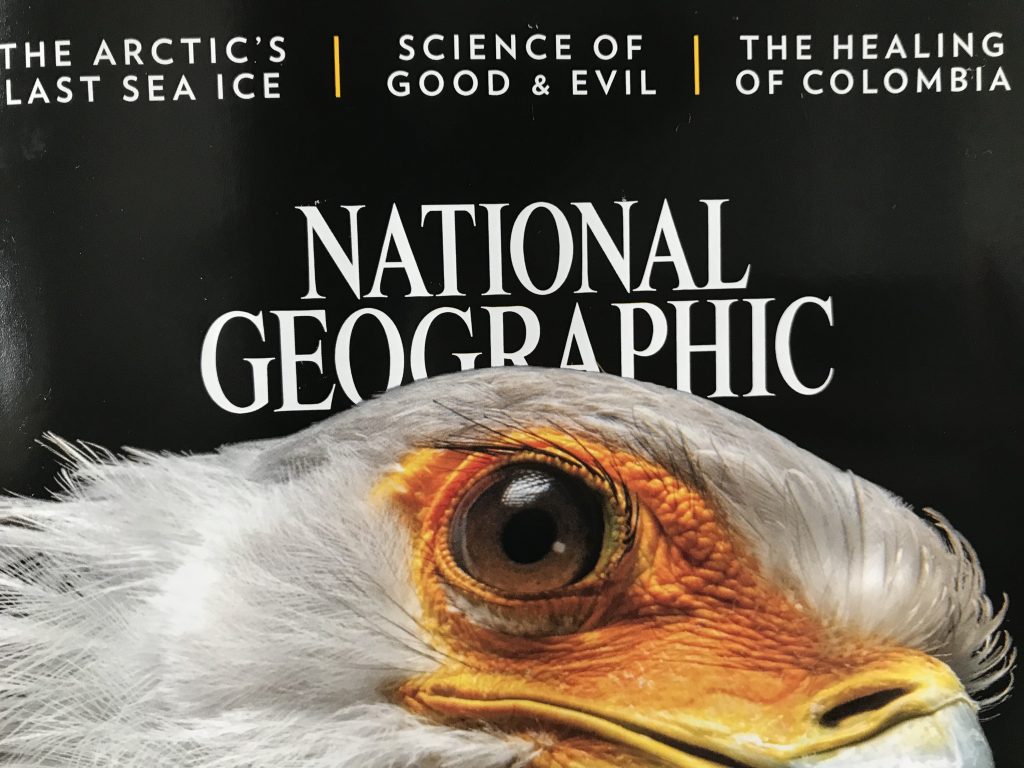 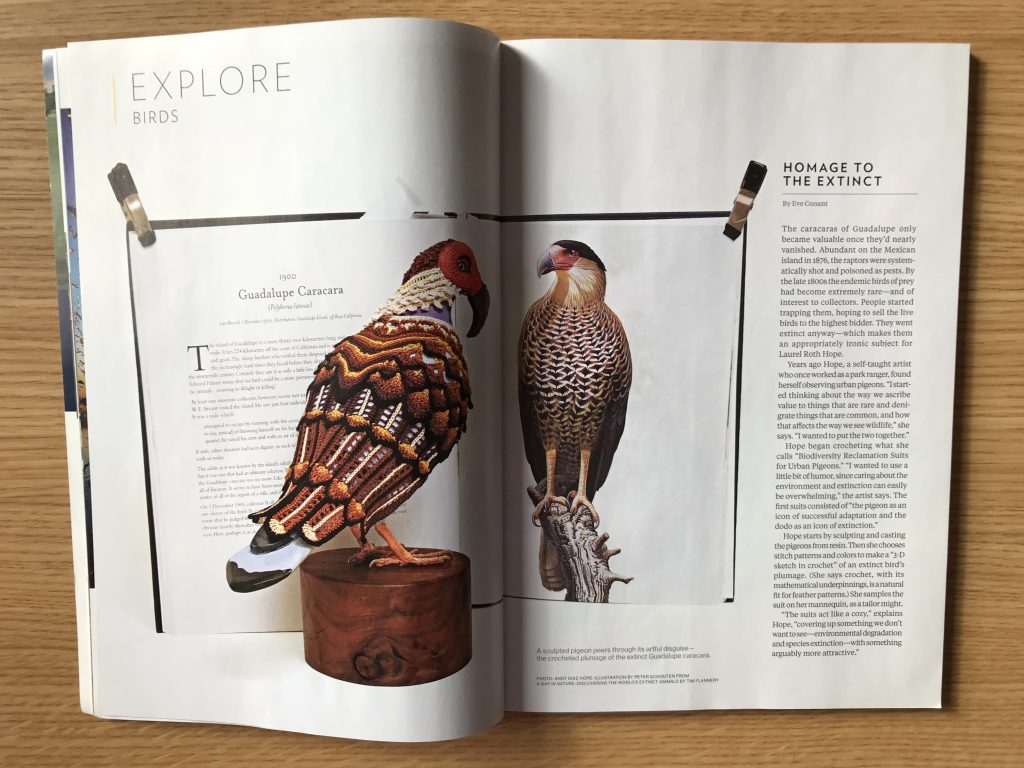 On this front of book page, you can see that all the type is in sans-serif except for the body text. 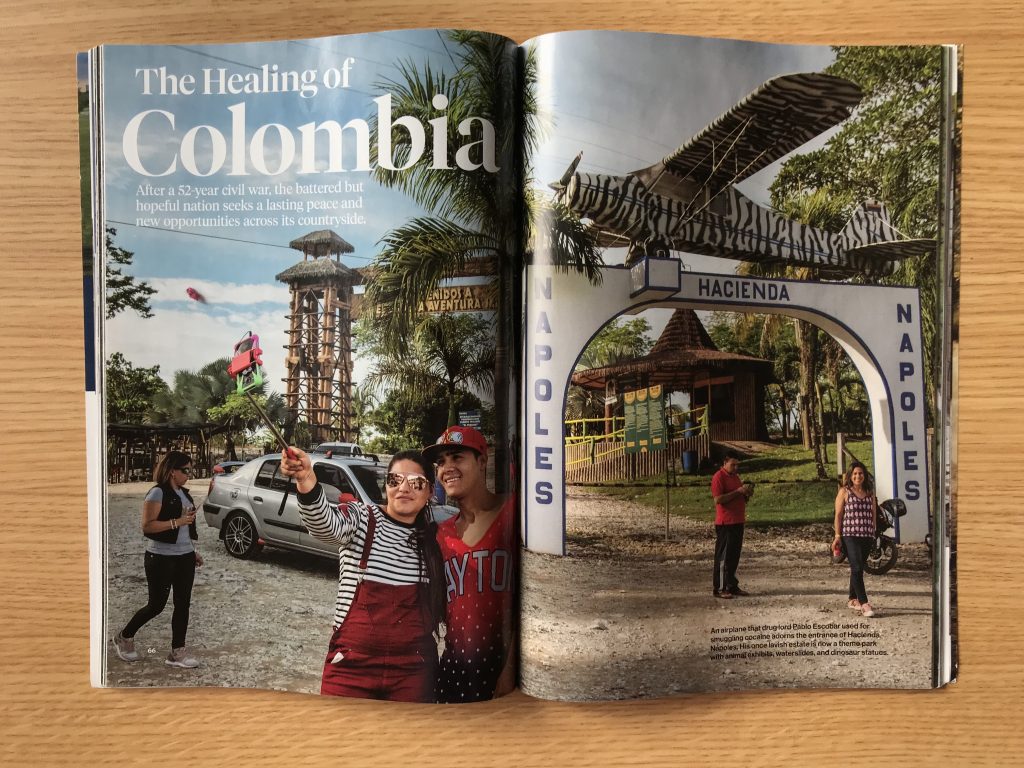 Yet on this feature story, everything except the cutline is in a serif typeface.

Even if the serif typefaces are slightly different from each other — like a different typeface is used from body text compared to headlines — the typefaces in each family (serif and non-serif) look similar enough to the others. This helps to give a cohesive feel to the magazine.

I thought it was interesting that coverlines were usually in a sans-serif typeface (the only recent issue that didn’t seem to have sans-serif coverlines was the December 2017 “The Real Jesus” issue), since sans-serif seems to be reserved for less important text. However, I guess since the nameplate is already in a serif typeface it provides some contrast to the page. 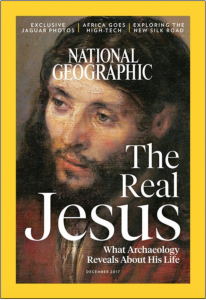 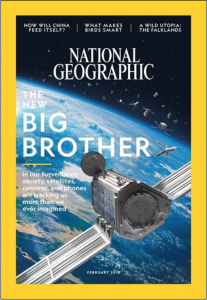 All of these typefaces aren’t particularly bold or eye-catching — they are nice, reliable and simple, but not note-worthy, and I think this was done intentionally so readers will always be drawn to the visuals of the magazine.

Overall, the language of National Geographic is elegant, simple and straight-forward. It is not overly wordy or cheeky, and the language tends to let the outstanding imagery speak for itself.

First of all, the name of the magazine, National Geographic, just sounds official — the word choice is powerful and elegant, and I get the sense that this name is making an entrance for the magazine when readers seen it on a newsstand or in their mailbox. I definitely would not consider it a “fun” name.

The headlines are relatively short — most are only a few words long. Some examples in the January 2018 issue: “Why Birds Matter,” “Flight Paths,” “The Healing of Colombia,” “Last Ice.” They are not wordy, cheeky or fun. They are also fairly generic, which I think entices the reader to continue reading — how is Colombia healing? What do you mean “Last Ice”? I think the almost-bareness of these headlines allows the story and lead images to speak for themselves — quite honestly, I only skim over the headline and spent more time looking at the photos for the story.

There are usually decks for feature stories, and they are definitely needed considering how brief the titles are. The tone of these, like everything else, is mature and elegant. For example, the deck from the “Last Ice” story: 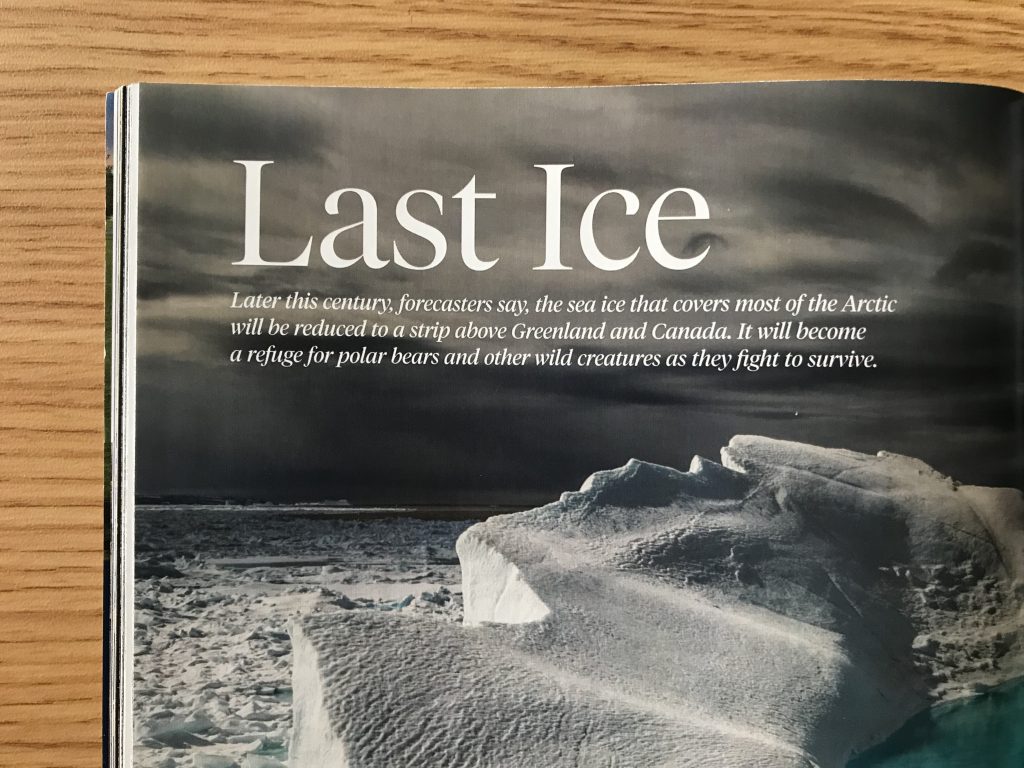 Pull quotes are usually used in the feature stories pretty sparingly — even for a story over 20 pages long, there is only one pull quote, and it’s just a sentence from the story (not even an actual quote). Honestly I wouldn’t mind a few more pull quotes per story — it’s mostly full-bleed images that break up a story, but on the pages with text on them it is kind of a lot of text at once. Generally, these are noteworthy lines and quotes (as pull quotes are meant to be) but they don’t particularly scream “special” to me. 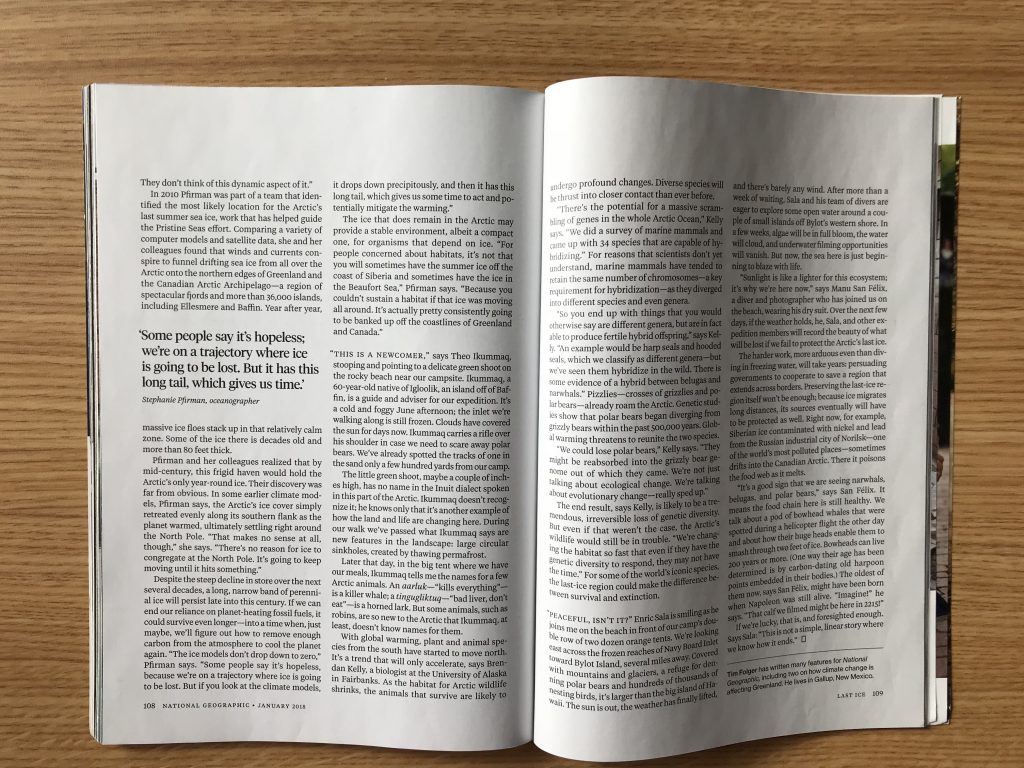 A pull quote from the “Last Ice” story.

National Geographic cutlines tend to be on the lengthier side — they are a nice, complete sentence or two. They don’t just simply describe the photo; there is usually a tidbit of information given that can make the image more interesting to look at for the reader. For example, from the “Last Ice” story: 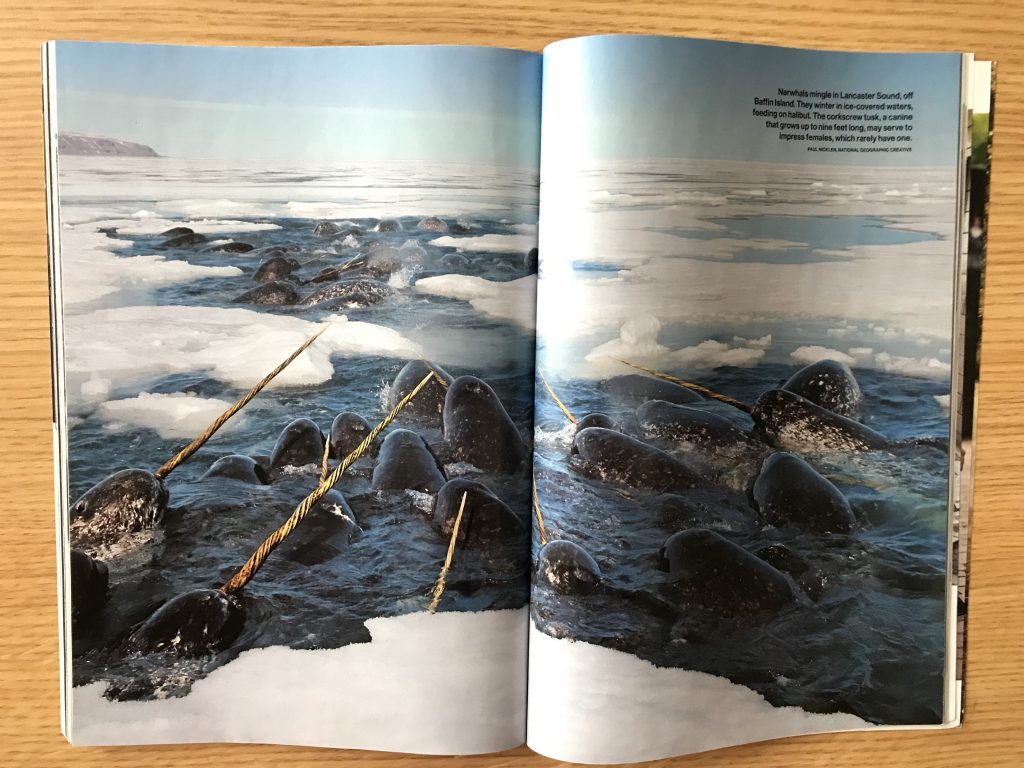 The photo caption reads “Narwhals mingle in Lancaster Sound, off Baffin Island. They winter in ice-covered waters, feeding on halibut. The corkscrew tusk, a canine that grows up to nine feet long, may serve to impress females, which rarely have one.”

Labels aren’t really used in National Geographic, except to identify parts of graphics and to identify photos (but that’s really done through the cutlines). I don’t think labels are particularly necessary — everything is very orderly and straight to the point in National Geographic. It’s not confusing and the lack of labels just makes the pages more clean and orderly.

For bylines, it’s about as simple as they come in National Geographic; usually it is just “By Name” or “Photography by Name” in feature stories, which have the full-bleed images. These two lines are equally weighted, subtly indicating that the text and photos are just as important. For stories with smaller images or a compilation of images — like the “Why Birds Matter” story, which has a lot of photos with different birds — there is usually a Photographed At/By Place/Name line. I think these bylines work for National Geographic because it continues this overall sense of minimalism and straight-forwardness.

Promos and refers aren’t particularly used throughout National Geographic except on the cover and table of contents. I think this is the right choice for the magazine, because I feel like extra lines of text would just clutter up the very clean and simple pages. Plus, National Geographic is a magazine you naturally flip through because of all its photography — you don’t need to entice readers to flip through it.

Section names are again, very elegant and straightforward — you don’t really need to guess what “3 Questions” will be. But names like “Visions” and “Explore” are still pretty all-encompassing and play off the fact that National Geographic is very visuals-focused. 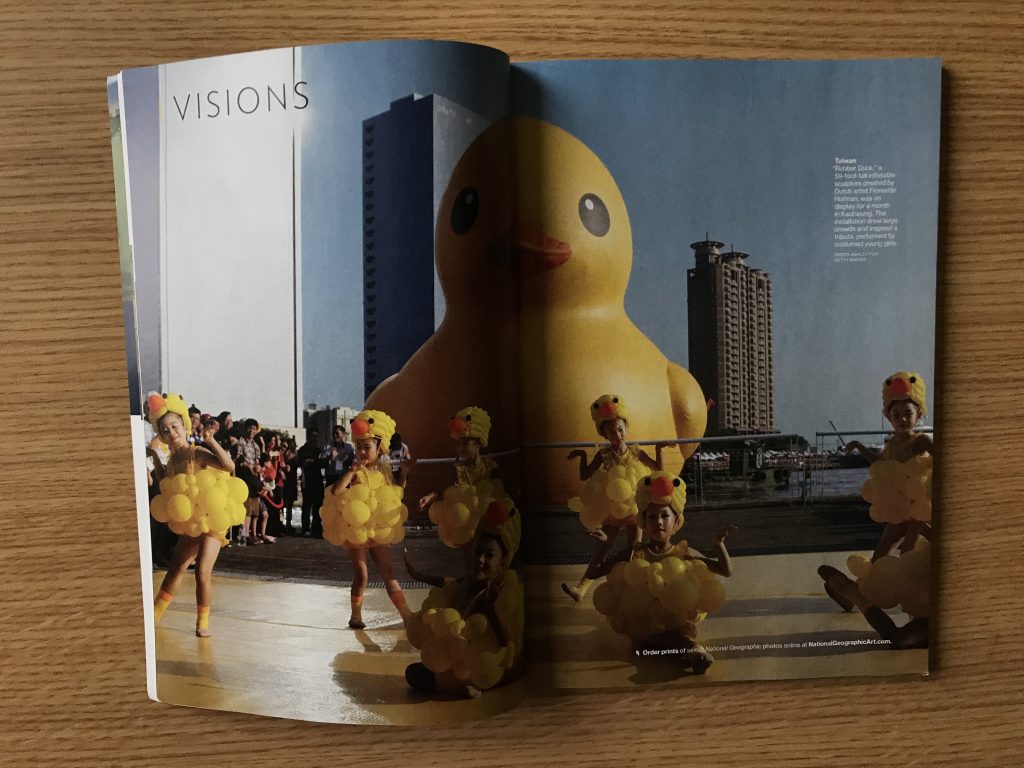 In conclusion, National Geographic continues its branding of elegance and timelessness by the straightforward language it uses — no extra frills or ruffles, but still thoughtfully chosen to reflect the high-quality imagery and accompanying stories it publishes each month.