The front page displays a large photograph on every cover with the focus being on imagery rather than typography. Of the past four issues, three featured politically-oriented photographs, including politicians and someone dressed in a KKK uniform. The most recent two issues featured photographs of politicians with a clean, white background. However, the two issues before that featured “louder” photographs that took up the whole page and had a lot of text written on top of them. These were a little more difficult to read. After analyzing a few more covers, I concluded that the New York Times Magazine generally opts for simpler backgrounds that they can effectively and efficiently lay text over.

The title “New York” falls on the top of the cover. In some issues, the decorations of the “N” and “K” fall off the page; however, in others, the text is smaller and fits fully on the page. There isn’t a tag line present; however, they place the date of the current issue is a small, serif typeface above the “K.” It’s common for them to place the names of the most important stories across the top of the front page in a bold typeface, along with one other story in a significantly larger typeface towards the middle-bottom of the page. On average, there are four stories represented in the form of coverlines. There is generally only one story that’s placed in the middle of the page and it is usually written in a large font. This gives a great hierarchy to that story because it really captures the reader’s eye.

This publication maintains minimalist styling from issue-to-issue – mostly black-and-white. They maintain the same margin sizes between issues. The cover feels light-hearted, yet serious. As I mentioned before, it usually touches on political topics but spins them in a way that doesn’t feel as serious. For example, the most recent issue has pictures of four presidential candidates; however, their heads are blown up to look like bobbleheads. This works for the magazine because it is clear that they do have political viewpoints and are likely to address them within the magazine, but they aren’t going to be super rigid and formal. The table of contents features a photograph that takes up a majority of the page. On the lower fourth of the page, there are 9 stories displayed with their respective page numbers. It appears to be very common for the magazine to take up a majority of the table of contents page with photographs. 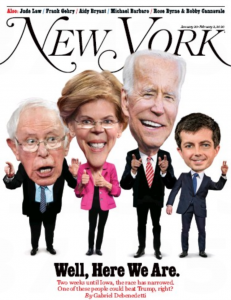 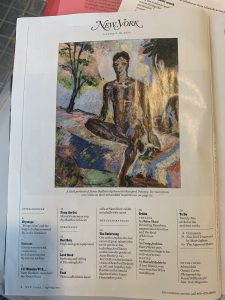 The New York Times Magazine has a handful of sections that are included in every issue, including “Intelligencer,” “Strategist, and “The Culture Pages.” They mark each section by writing the name in the top left of the page. 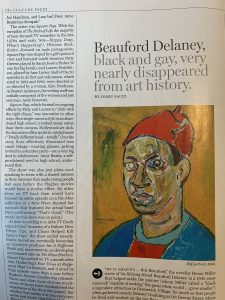