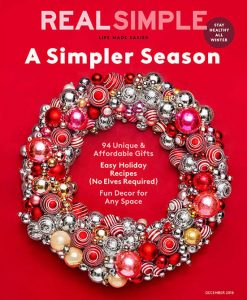 Real Simple is a women’s lifestyle magazine that launched in 2000. For over 18 years, the magazine has been introducing busy women to numerous ways to make their lives easier and simpler. This January, Real Simple published their January 2019 issue with the main focus of starting fresh in the new year. The number of pages varies each issue. After looking at four different issues, the average page number seems to be 130-150 pages. Real Simple is a monthly magazine, with each month having a central theme. The physical dimensions of the magazine are 9″ x 10.75″.

The choice to create a monthly magazine for the life of a busy woman was brave and smart. Long gone are the days where women are expected to stay at home while their husband is off to work. Women can work, have children, volunteer, have a successful marriage and more. The demand to have a monthly magazine for these women is relevant. With this choice, women have a guide or “friend” that they can turn to, or look forward to reading each month. Even though the number of pages ranges each issue, each issue is easy to read, and there is no overload of content. Again, this may have been done to keep it simple for the busy woman. Content ranges from financial advice and makeup tips to setting goals and recipes. The dimensions are different than the typical 8″ x 10″ size. This may have been chosen to easily turn pages, stand out from other magazines, and looks more pleasing on a coffee table rather than People or Cosmopolitan. The choice is different but helps consumers remember that the magazine is different than others, making it successful. 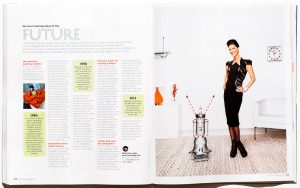 An example of five column text from the April 2013 issue.

The number of columns and the margins create an easy and enjoyable reading and viewing experience. Real Simple may have chosen to differentiate from other magazines, who may do one or two columns, to stand out and have their consumer’s experiences be painless and pleasing to the eye. 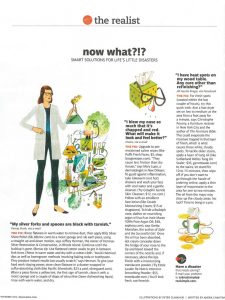 An example of white space in a 2014 issue of Real Simple.

Since Real Simple is all about making life easier for the busy woman, many of the magazine’s stories are short or broken up that is not overwhelming. For example, since most stories are short and give advice, there tend to be anywhere from one to five blurbs per page. They are often numbered and have their own column. The longer stories, such as a feature on a woman dealing with her mother’s passing in the January 2019 issue, has eight pages. The pages have one to three columns of text on each page, with one illustration on each page. This breaks up the story and lets the reader gracefully flow through the story.

Other pages or sections of the magazine tend to have one to five images per page. Overall, all the photography is clear, vibrant and enjoyable to look at. The magazine also uses a lot of white space but not too much that readers get lost in it. The white space draws eyes to the text, illustration or image.