The Nation has more color on its covers than anywhere else in the magazine. The nameplate is usually red but sometimes also black, depending on the cover illustration. Although the cover uses more color, it is usually not bright colors. They tend to be more subdued with one main color. 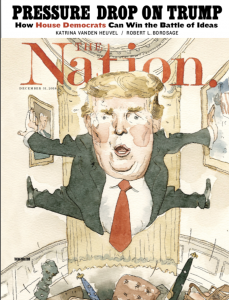 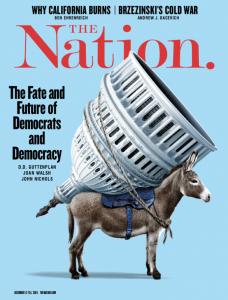 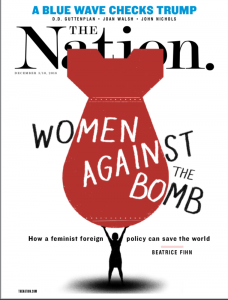 Since The Nation covers American politics, its colors are centered around this theme. The most common colors are red, white and a bit of yellow. The nameplate is usually red, and that same color is threaded throughout the magazine. Red is used on every page in the magazine, from the title of the section, drop caps, section titles, pull quotes, and more. Red helps to establish hierarchy and draw the reader’s eye to certain parts of the page. 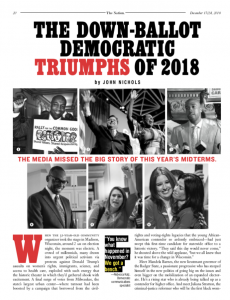 This overall effect works because it ties the whole magazine together. It weaves a thread through all of the pages. The red is bold and pops out on each page, which helps to tie in the political aspect of The Nation.

Yellow is used sparingly in The Nation to bring a pop of color and highlight something important, like key words of a pull quote. 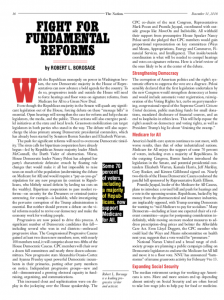 The qualities The Nation’s color use brings is political and serious. It adds an intellectual feel to the magazine. Keeping the colors basic adds consistency and a “harder” news element to the feel of the magazine.

The Nation uses a lot of illustrations, which are usually in black and white, with the occasional splash of red. They use more photographs for the feature section. The colors vary on the picture and the story. I think that The Nation uses the same colors in the front of book sections to establish consistency and a concrete feel to the magazine. Since they cover politics and news, the actual photographs in features vary but don’t stray away from their overall color feel. 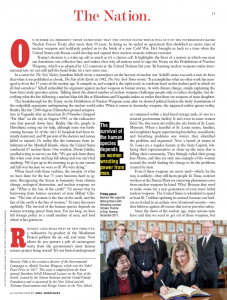 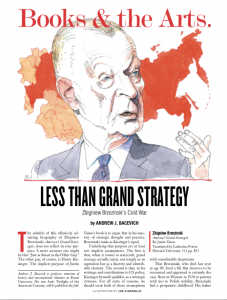 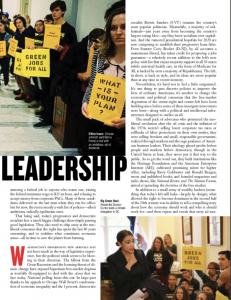