The average reader of The Nation is 65 years old and college educated. The language used in the magazine reflects the demographics. They use long sentences and more complicated words, but not in a way that demeans the reader. Unlike The New Yorker magazine, The Nation does not assume that the readers know everything that is going on in politics in America. The articles are explanatory but also assume that the readers know a bit about what is going on in the news. The language is strikingly partisan, with a very liberal stance in their articles. The Nation is known as a progressive magazine, and they continually push the envelope with liberal ideas and language. The language affects the content because it is a liberal take on all of the articles.

The Nation conveys a sense of importance and intelligence. It suggests that the magazine will be about political affairs concerning the United States. It is successful because it is short, to the point and encapsulates all of the content neatly.

Most headlines are short and straightforward, usually two to three words. The accompanying deck provides more context but is kept under ten words. The headlines and decks are serious in the beginning of the magazine.

Toward the end of the magazine, the headlines and decks are longer, but still straightforward and not playful.

Pull quotes are placed in stark contrast to the body copy. Most are white text against a black background, making them pop on the page. They are usually quotes and feature attribution at the bottom. They are the juicy, good quotes from the story. Without reading the article and the context of it, they would not make sense. At the same time, the contrast they provide on the page and the boldness of the quote itself pull the reader in and entice them to read the story. 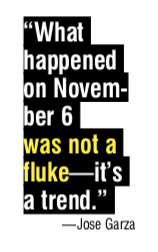 Cutlines feature two components: a short introduction to the cutline, usually just a few words, followed by a sentence about the picture. The cutlines don’t usually describe what is going on in the picture. Instead, they add to the story with a small bit of carefully curated information about that includes the main focus of the picture. 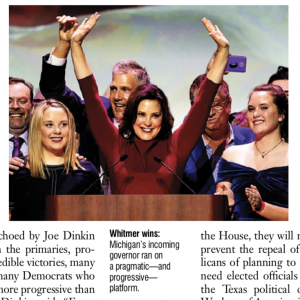 The Nation does not use labels.

The Nation takes a different approach to bylines. The beginning of the magazine features bylines at the top of the page, with the name of the author and an illustration of them  right justified opposite the headline and the deck. This approach is unique and interesting, and gives the reader a small snapshot of the author. This is the best approach for what The Nation is trying to achieve.

Towards the end of the magazine, the bylines are a more regular style. They just say “by” followed by the author’s name.

The Nation does not have any promos or refers.

The section names of The Nation are straightforward and simple. There are three distinct sections: Upfront, Features and Books and the Arts. They are named this way in the table of contents. Upfront represents the front of the book, while Features is the feature well and Books & Arts is the back of the book.