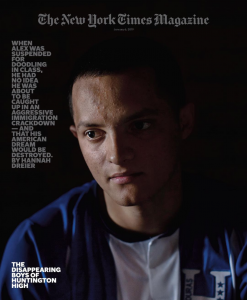 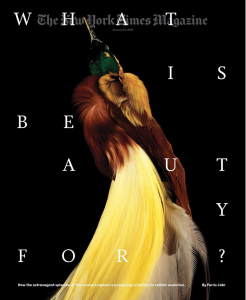 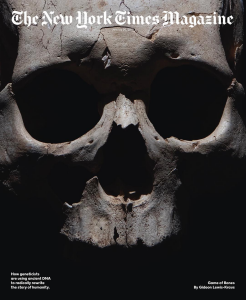 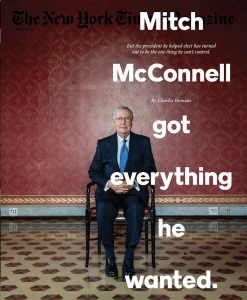 The New York Times Magazine cover always features the hero feature story from that weeks issue. There are never teasers to the other content in the magazine, it only shows one story. The cover images are generally from a highly art directed photoshoot. It is rarely an illustration. The last four issues had extremely dark, dramatic lighting. This is consistent with past covers the magazine has done, but I would say this treatment usually changes with the season. Last spring they did a lot more with pastel shades and lighting.

The creative image concepts generally drive the cover forward, but The New York Times Magazine really breaks the rules when it comes to their cover typography. For example, they consistently run type that teases to the feature story across the nameplate, which is not common practice for a lot of magazines. I think the most successful version of this exploration was on the Jan. 13 cover. The delicate type feels balanced as it interplays with the dark image with a bright spot. I think this approach is a lot less successful on the most recent issue with Mitch McConnell on the cover. This type feels off-balance and covers so much of the image. Although the image itself is not all that interesting, I think the type detracts from at least the well-lit portrait.

The images are sometimes the most noticeable part of the covers, but other times, the titles of the stories take precedent. On Mitch McConnell’s cover, the type is overbearing on the rather boring portrait. The secondary subhead and byline give information, but are never the focus of the typography. Finally, the nameplate often just disappears into the image. It’s often the last thing I saw when I examined all four covers. I think this approach is taken to place importance on the content rather than the name brand, but I think the name plate can add a level of beauty and status to the page, so I don’t always agree with how unnoticeable it is. It is always in the same place set at the same size (8 inches wide), so that helps with consistency across the covers. The nameplate changes color with every issue since the images run the whole height of the magazine so in order to maintain at least a certain level of legibility, the type color has to change.

There are not multiple coverlines, as only one story is featured on the cover. The type is usually large and plays on an imbalance that creates interest on the page. Since the magazine uses a different photographer for every issue and the feature stories cover such varying topics, there is a lack of consistency in imagery, which I love. That is what keeps this magazine interesting to me. I love seeing the different concepts they come up with. There is also a level of consistency in inconsistency with how they experiment with typography. They also keep the nameplate and date in the same place, at the same size every issue, so that helps maintain a level of reader experience.

The tone of the covers change with every issue because of the wide topics they cover. I saw a music cover feature that felt light and bubbly, while the four most recent issues have covered serious topics, so the tone conveys that heavy, journalistic message. 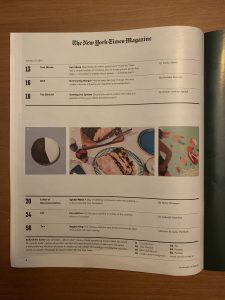 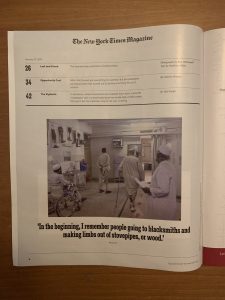 The table of contents uses the three-column grid, but plays with the width of these columns. The TOC takes up two pages. The first page features six stories and three images from various stories on those pages. I appreciate that they give an extended explanation of what the stories are about rather than just the title because that improves the reader experience. It also has a small sidebar section that breaks down the smaller “fun” stories in the front of book and back of book, including the crossword puzzle and games, etc. It also has a brief about the concept behind the cover. Since The New York Times Magazine has almost a cult following for how they put together their various experimental covers, I think readers really like to get a glimpse into what the photographers and art directors were trying to portray with the cover. It also gives just that much more insight into what the story might be about. The second page of the TOC features three stories and one large teaser to one of the feature stories.

I like how much white space the TOC uses because the tables can often feel really overwhelming and my eye never knows where to go. This is not the case with this magazine, and is a really successful approach to breaking down all the content in the issue. 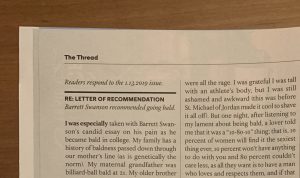 Since The New York Times Magazine is a smaller, weekly publication, there are not opening pages for the sections. The sections are labeled through small text in the upper left corner with a thin rule under it. The sections are called: The Thread, First Words, Well (a column), The Ethicist (a column), Letter of Recommendation, Eat (a column), the feature stories, Puzzles, the continued section of stories and Talk (an interview section).

I like how the magazine is organized because it gives you some shorter, lighter stories to start out with before diving into the hefty, long form feature stories. The simple notation of the section labels makes it clear the reader where they are in the issue, but don’t overpower the page.