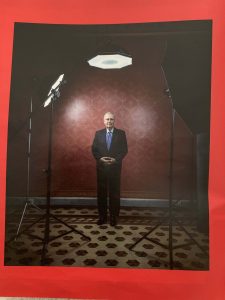 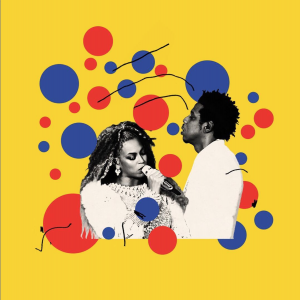 The New York Times Magazine uses mostly photos for its feature stories but occasionally opts to create photo illustrations for some of its more light-hearted pieces. For the Mitch McConnell story, the cover and opening shot were both highly art-directed and the additional images were completely photojournalistic in their feel and content. However, more recently, for their story about the “25 Songs that Matter Right Now,” they devised a style for photo illustrations for the cover and internal images that really felt consistent, but also highly art directed. I think that is one thing that distinguishes the NYT Magazine imagery from the newspaper’s, the level of art direction. The photographs, at least, often come out of photo shoots rather than natural moments a photojournalist captured. The timeline for the magazine’s production likely allows for this difference. 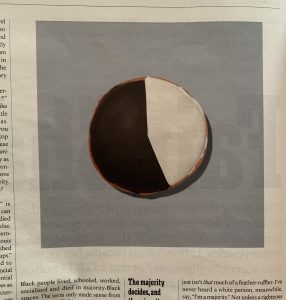 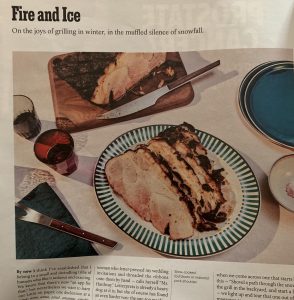 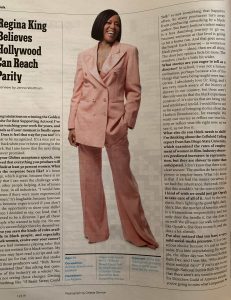 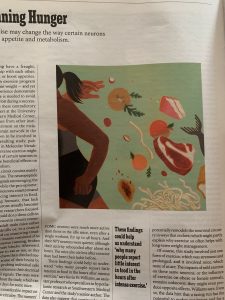 For front of book stories, most of the images are illustrations or graphics. One story combined a photo illustration with a graphic as a cookie created a pie graph. In the front of book and back of book, the images are run a lot smaller and generally only have one image whereas for feature stories, the images are full bleed for opening pages and then multiple photos are run larger throughout the story. The images are always rectangular except for one silhouette cutout for a back of book story, which appeared to be a stock photo. The illustrations are all a little different since different illustrators are commissioned for each, but they have something unifying about them, which definitely comes from expert art directors. 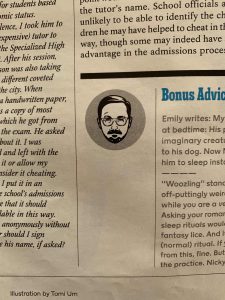 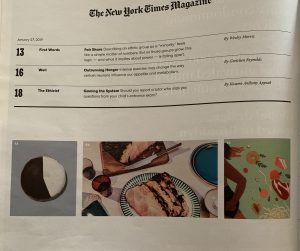 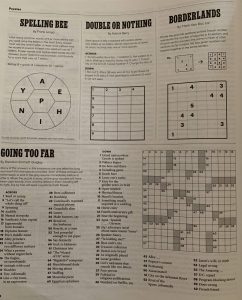 There is some sort of image or graphic on every single page with every story. I think this is what distinguishes its purpose from the newspaper because they have more room and glossy pages that hold color far better than newsprint so they can spice up the stories in their visual presentation. For columns, there are small graphics that alert the reader to what the content might be about. Even on the table of contents, there are teasers with medium-sized photos throughout. Although there are not all that many graphics, they are all small, grayscale and yet, relatively detailed for icons. Graphics are also used for all the puzzles in the back, again grayscale. For a story that is more data-driven, I’m sure the style would be defined as a feature story would. 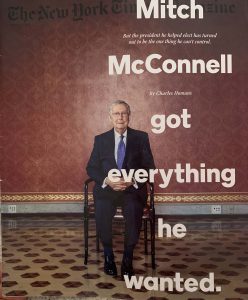 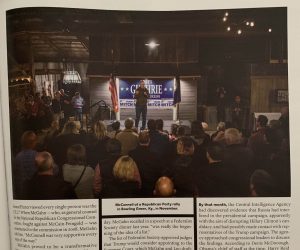 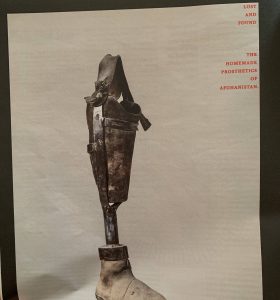 A majority of the images have people as the focal point, but there is one feature story in my issue that focuses entirely on homemade prosthetics from Afghanistan. For that, only the prosthetics are featured. Even in the illustrations, people are usually illustrated into the image in some way. The magazine mixes up their use of wide, medium and tight shots. This is most clear in the feature stories. For example, the Mitch McConnell cover is a medium shot, but the opener is a wide shot that puts the whole shoot in context. Those are both incredibly passive images, but the secondary images throughout the story show him in action. It makes sense to vary the composition because the publication would seem incredibly flat without variation. I think this is something I will try to look out for in my book since all my illustrations feel pretty consistent. As far as color, the palette is generally incredibly realistic. The photo editing does not extremely alter the photos in a way that changes saturation, etc. The magazine gets more experimental with color in illustrations, but for the most part the palette feels a tad muted and understated. Again, that changes with the stories, but this particular issue had rather heavy content. This changed with the “25 Songs” story because it has such a light, happy feel.

There was only two instances of type on images in this issue: the cover and the prosthetics feature story. The NYT Magazine is known for the experimental type on images for the covers, and I would even go so far as to say that is a hallmark of their design system. However, that generally does not carry into the inside pages. For front and back of book stories, there is no type on images, but the designers get to play more with that for feature stories as they devise packages that specialize each feature.