TIME magazine is known for its cover design. They are distinguished in the industry, and have usually stayed consistent over the years, with the exception of special issues. 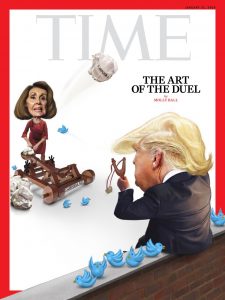 COVERS: TIME normally has a red boarder around the margins of the cover and a white or grey background featuring a single image or illustration on a blank-colored background. The image or illustration highlights the main feature story. The nameplate and folio rarely change, with the exception being the color of the nameplate, which changes occasionally. The large TIME nameplate is always on the top center of the page, a classic for the publication. 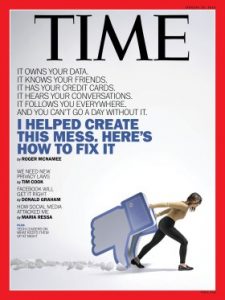 Normally, one feature story is highlighted on the cover, but in larger packages, like the one above, several related stories are on the cover, as they all tie into the issue’s main theme. In this case, the stories are related to social media and data mining, specifically with Facebook. The hierarchy of the stories suggests this, as the main point of the package is largest and closest to the top, with the smaller stories placed below with a smaller font size. The blue text draws emphasis to the story, a rarity on TIME covers. 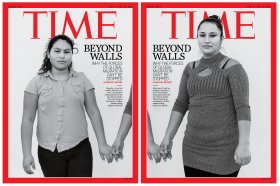 Occasionally, TIME will publish several different covers for special reports, like above. This most recent set of covers represents both February 4, and February 11, 2019. This cover points to a special report on global migration. When the covers are placed side-by-side, they tell the stories of Yaquelin, 11 and her mother, Albertina, 27. The women were separated at the U.S. – Mexico border, but recently reunited. The symbolism of the cover images tells of their separation and eventual reunification. A very smart design decision on TIME’s part. 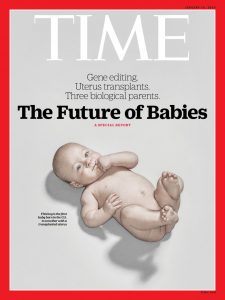 While TIME’s covers are consistent in terms of design, the central image or illustration is usually centered, but the text is moved around to support the images. The text can be centered or left or right justified, depending on the image placement. The tone or message varies from issue-to-issue, and largely depends on the cover story. The photos from Feb. 4 and 11 are more serious, to support the depth of the special report. While the Jan. 21, 2019, cover is a little more playful to match the tone of the article and feud between Donald Trump and Nancy Pelosi amid the government shutdown.

TABLE OF CONTENTS: The TOC is fairly easy to navigate, as there isn’t a lot of variation in its design from week to week. News, Opinion, Features and Reviews are all main categories on the TOC, with several stories listed underneath. There is normally a single image on the TOC page, related to the first feature story listed in the TOC. 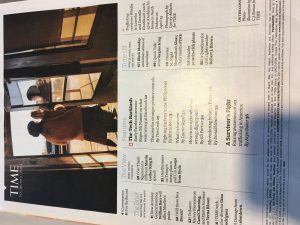 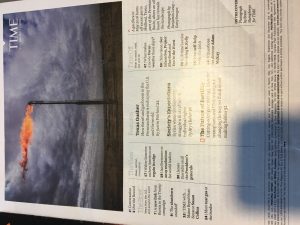 SECTIONS: As I mentioned above, the TOC suggests there are four main sections in TIME magazine: The Brief, The View, Features and Time Off, which cover news, opinion, features and reviews, respectively. Each section has its own individual cover within the issue, which helps the reader decipher which section they are in. A marker on each spread also indicates what type of story is being read, whether its politics, sports, technology, or anything in between. 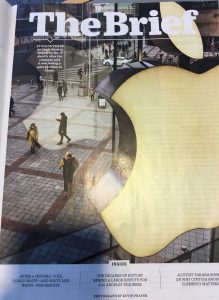 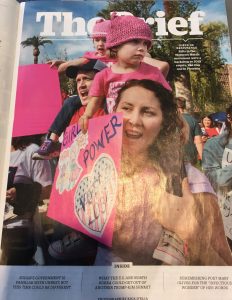 OVERALL: TIME is extremely consistent with cover, TOC and section design. TIME is known for its traditional cover design, which showcases a single image or illustration on a blank-color background related to a main feature story. TIME uses a red boarder around its cover, and a variation of black, grey, white and red throughout the nameplate and background color. The TOC is consistent with design and sections have their own covers, making it easy for readers to indicate which section they are currently reading.