TIME magazine has been in circulation since 1923. The weekly magazine publishes on the standard 8 X 10 3/4″ page, with an average of 56 pages per issue, with exceptions being made for special issues like Person of the Year, which tend to run a little longer. This method is effective because it encapsulates the stories thoroughly, while not overloading the reader with information in a typical issue. It is obviously effective to run longer special issues, because there is more information and photographs that accompany each story.

This is pretty standard in the magazine industry, and with TIME being as influential as it is, the publication doesn’t really need to worry about trying anything new or cutting edge, because they have already secured their reputation.

Grid: There is little information available on TIME’s page grid and layout. Generally, each page uses two or three columns, and stories are spread over at least two pages, making a four or six column grid for an opening or jump spread. This is effective because TIME usually has longer features, and breaking up the text in smaller columns can make it easier to digest as a reader. (SIDE NOTE: Grids are something I definitely need to work on this semester. The whole thing is very confusing.) 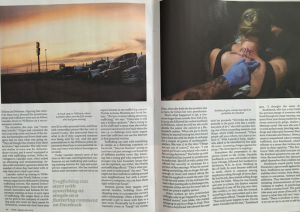 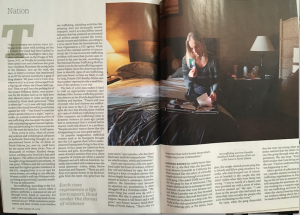 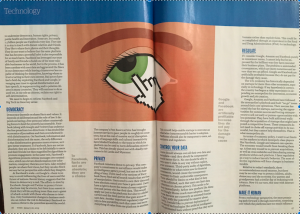 Layout and White Space: Features stories tend to run at least six pages, including a opening and two jump spreads. The opening spreads tend to be photographs or illustrations, both of which are always high quality and intriguing. White space is rare, unless it draws emphasis to a pull quote or graphic. This is a smart move, because readers will be drawn to the pull quote, making them care about the subject, which could entice them to read the entire article. Images are typically fairly large on the top halves of each page, which also draws the reader in, and can also make the text seem more “readable.”

Overall, TIME has been an icon in the magazine industry for decades, and their design has usually stayed true to its brand. This is effective because it is recognizable to not only avid readers, but those just glancing through the magazine racks at the grocery store.