The typography used within Wired very much compliments the content within the magazine. Much like the name Wired, the typefaces used throughout the publication compliment the technological nature of the magazine.

The headings use a serif typeface “Ambroise” that is a longer/more condensed typeface with both thick and thin strokes. The serif has a very large and prominent rounded bracket and the legs of certain letters (i.e. The ‘r’ and the ‘k’) are very beautifully rounded. I find it interesting that this particular typeface is used considering this kind of typeface is often associated with fashion magazines, however, I feel it does compliment the rest of the typefaces really well and adds a sophisticated flare. 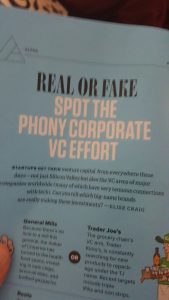 The decks utilize a sans serif typeface called “Tungsten” and is very well-suited as a compliment to the serif used for the headings. The edges of this particular sans serif are not sharp, they are slightly rounded, but in general it is fairly condensed and really supports the nature of Ambroise.

The body copy utilizes a serif “Exchange” which interestingly was initially designed for The Wall Street Journal as a replacement for the DowText. This particular typeface was designed by Tobias Fiere-Jones, and is a perfect text for body copy as it is very readable at a small size.

Unlike most publications, Wired indicates to a reader where the story will begin by using a bolded small cap sans serif typeface, as opposed to inserting a drop cap. I think this technique really compliments the nature of this publication because it sends a message to the audience that this is a unique magazine and a future-driven magazine. Wired gives off a very techy and futuristic look, and I think it makes perfect sense that many of the techniques used are unconventional because, well, this magazine does not exist to be conventional. 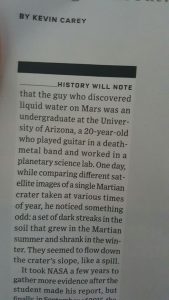 Another example of Wired’s unconventional use of typography is with its cover name. I can’t seem to find the name of the typeface that is used on the cover, however, it is unique in that it combines elements of sans serif and serif type. The ‘W’, ‘I’, ‘R’ and ‘D’ are all sans serif while the ‘E’ has elements of a serif to it. In addition, the way that the type is presented makes it seem as if they are not aligned. However, this is just an illusion because they are all properly aligned, but the ‘W’, ‘R’, and ‘D’ are just surrounded by a box. 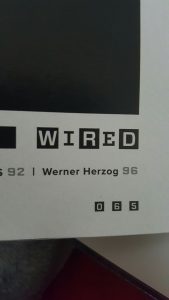 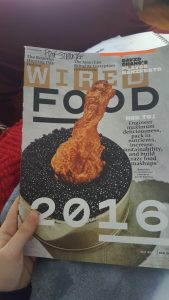 Wired’s language from issue to issue comes across as very creative and clever, leaning more toward a less formal and more conversational type of discourse. This style of writing is particularly apparent in the headings in that often times, the heading is some sort of pun related to the content in the story. However, unlike many “punny” things, these puns are very clever and not cheesy.

For instance, I analyzed the August 2016 issue, and found that there was a plethora of creative headings that really elevated the look and feel of the article in which it was present. There is a particular article within the Gadget Lab section of the BOB titled, “Swipe Right”. I found this to be particularly clever because it not only sparked my attention, but it fit perfectly as the story’s heading, despite having nothing to do with the content. In other words, the editor chose to allude to the popular dating app, Tinder, whose catchphrase is swipe right or left for the person. However, the contents of this story actually pertains to sports – more specifically, to fencing, badminton and golf – all sports that essentially require a swiping motion. Another interesting article title from the same section pertains to the article that discusses the sport of archery during the Olympic games, titled “Take a Bow”. Again, very clever and far from cheesy. 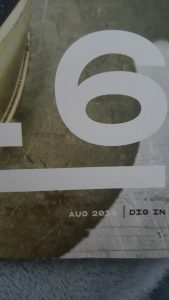 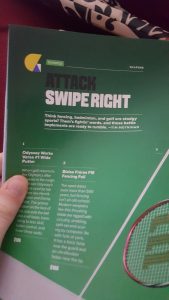 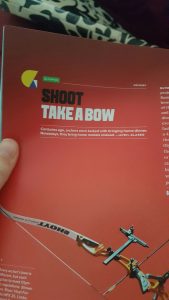 Other aspects of Wired’s language that I find very unique are the way in which the magazine gives credit to photographers and illustrators. In the August 2016 issue, there is a spread on forest fires out in California titled “Eternal Flames California Burning.” This particular spread is very photo-based as opposed to word-based, and includes a fairly hefty caption on the photograph that was used. 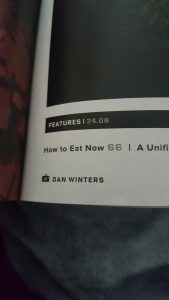