TIME has always used the same consistent fonts and typefaces. The masthead has always been a large, serif font. It is a classic style for the magazine, giving it a sense of familiarity to readers and prominence in magazine racks. Cover lines use a similar style, featuring serif fonts with various sizes and weights depending on the cover story and tone of the particular issue. 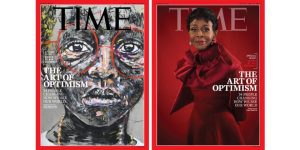 The February 18 and 25 covers of TIME (From TIME magazine)

The inside of TIME follows a pretty similar pattern, although most of the body text isn’t as bold or weighted as the cover lines, with the exception of pull quotes or headlines. Most headlines are sans-serif, with all uppercase type. But, the body text reverts back to serif fonts, making it easier to read and more legible in design. Special reports or special sections also rely on a bolder font to communicate its importance, a move TIME uses often throughout each issue. Readers can quickly determine which stories are more important, or even more serious, based on the typeface used in each article. 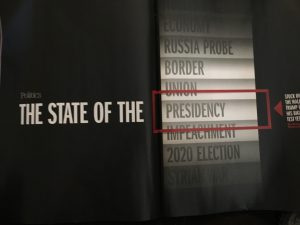 The above example is a six-page spread from the most recent issue of TIME. On the opening spread, the section front, Politics, is a thin, serif font. This contrasts the story headline, which uses a bold, san-serif font. The contrast develops a sense of hierarchy among the elements on the page, as it directs the reader to the headline, but also allows the section front to stand out on its own as well, something TIME does particularly well. 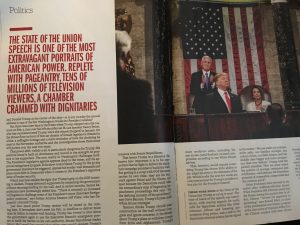 Jump spread uses red font to showcase the most important part of the story, hopefully drawing readers in.

The above example shows the jump spread of the article mentioned earlier. The lede, which summarizes the longer article, is printed in red. This suggests that this piece of text is more important, or more prominent, than the rest of the article. It gives readers a preview to the story and may entice them to keep reading, if they find it appealing. TIME uses the same treatment for pull quotes, most likely for the same exact reasons. 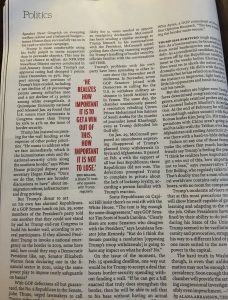 TIME designs pull quotes with a thick, sans-serif font, usually in a different color, to highlight its importance to the story.

Occasionally, TIME switches the fonts, using serif for the headline and san-serif for the subhead and bylines, as seem below. 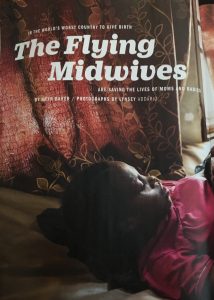 Another opening spread, but, this one uses serif fonts for the headline and sans-serif for the subhed and bylines.

Overall, TIME strikes a balance between contrasting font styles. Section markers and smaller fonts, like the body copy, use a thinner serif font to increase legibility and readability. Headlines, pull quotes, ledes and section fronts are often printed with a bold, serif font, to establish a hierarchy and to help readers determine the most important and most useful pieces of information. This tactic could ultimately decide whether a reader finishes the article. TIME has used this system for quite some time, although they did switch typefaces a few years ago. But, even though the individual typefaces changed, they still used contrast between weight, size and color to establish hierarchy on each page.